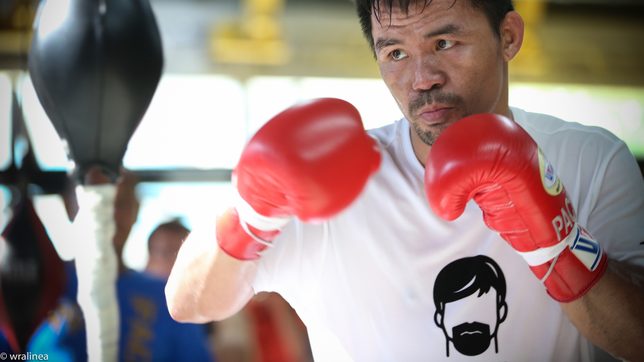 STILL FIT. Despite a two-year layoff, Manny Pacquiao has been keeping in shape by playing basketball, jogging, and exercising.

Facebook Twitter Copy URL
Copied
Although Errol Spence is much younger and more active than Manny Pacquiao, Nonoy Neri says the American champion 'might be in for a big surprise'

Nonoy Neri was already in Davao City when news broke out that Manny Pacquiao will be fighting Errol Spence on August 21.

Rather than worry, however, Neri felt relieved.

He preferred Spence over Terence Crawford as Pacquiao’s next opponent after a two-year break.

“Crawford is a better [fighter] than Spence in my opinion,” Neri, one of Pacquiao’s trainers, said on Saturday, May 22.

Unbeaten in 37 professional bouts, Crawford is considered by various boxing outlets as the finest welterweight and one of best pound-for-pound fighters in the world.

The same goes with Spence, who is also undefeated in 27 fights.

“Style-wise, [Spence is] a better matchup for Manny,” he said.

Neri headed back to Davao City to supervise the MP Boxing Gym, while Fernandez returned to Polangui, Albay, where he serves as vice mayor.

According to Neri, the “Pacman” told them to wait for his call on when they will officially start training camp for the unbeaten Spence, the International Boxing Federation and World Boxing Council welterweight king.

Given a choice, Neri said he would like Pacquiao to train in General Santos for eight to 10 weeks.

“That would be enough. I don’t think Spence is super special. He’s not that fast and isn’t too strong. He’s just a big southpaw with youth on his side,” explained Neri.

The long lull doesn’t concern Neri a bit since he knows Pacquiao has always been in shape by playing basketball, jogging, and exercising.

“Buboy and me did the mitts with him in GenSan and I can say nothing has changed. The speed and power are still there,” said Neri.

He added, “Spence might be in for a big surprise.” – Rappler.com