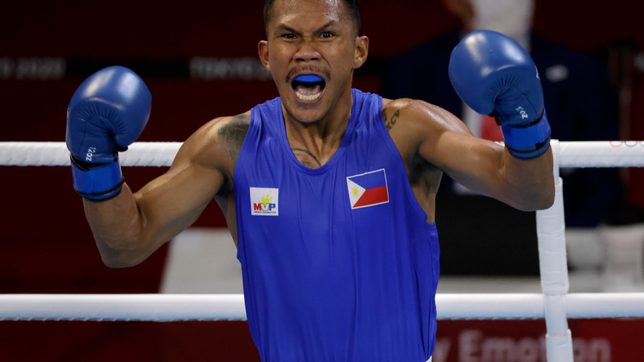 SURE BRONZE. Eumir Marcial raises the Philippines' haul in the Tokyo Olympics to three medals.

Eumir Marcial had Arman Darchinyan figured out from the opening bell.

So it was no surprise why the Filipino needed just two minutes to dispatch his Armenian foe as he punched his way to the Tokyo Olympics men’s boxing middleweight semifinals with a first-round knockout win.

Having faced Darchinyan in the past, Marcial and his coaches laid out a winning scheme: to lure the Armenian into going on the offensive and punish him with counter attacks.

That was exactly what Marcial did.

After forcing a standing count on Darchinyan earlier in the first round, Marcial sent his opponent to the canvas with a nasty right hook to the head as referee Wulfren Olivares Perez stopped the bout with 49 seconds left.

“At first, I was still sizing him up, but during the last minute, I already figured his game out,” Marcial said in Filipino.

“My plan was to bait him by leaving my face open so that I can counter him when he attacks. That was also the instruction of my coaches – to observe his punches,” he added.

With the win – his second straight stoppage victory after beating Younes Nemouchi of Algeria earlier in the tournament – Marcial secured at least a bronze for the Philippines. 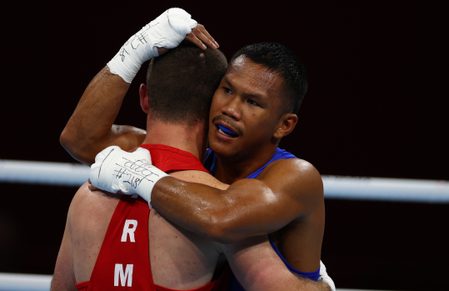 Marcial will go up against Oleksandr Khyzhniak, seeking to avenge his loss to the Ukrainian in the Strandja Memorial Boxing Tournament three years ago, and advance to the Olympic gold-medal match.

Khyzhniak beat Marcial via unanimous decision during that fateful encounter, but the Filipino said things are different now in the Olympics.

“I’m ready for this fight. During our last bout, I was injured so I lost. Now, I feel like I’m in top shape,” Marcial said.

Marcial will face Khyzhniak on Thursday, August 5, while Nesthy Petecio will gun for the Philippines’ first boxing gold against Sena Irie of Japan in the women’s featherweight finals on Tuesday, August 3. – Rappler.com