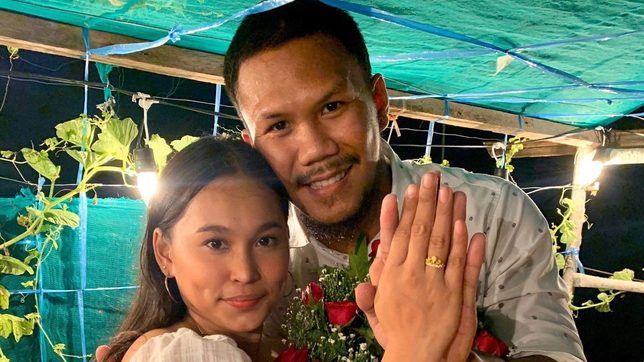 It will be a grand wedding in Batangas for the 26-year-old Zamboangueño, who saw a windfall after his Olympics win this year, and his girlfriend of nine years, Princess Jenniel Cabradilla Galarpe.

It would be the third time for a famous Filipino boxing prizefighter to take a scion of a prominent boxing family in Cagayan de Oro as a bride.

Years later, Jalnaiz married Reynaldo Galarpe’s younger sister Joy, and the couple has since moved to the US.

Reynaldo told Rappler members of his family would be in Batangas to attend the wedding, though he himself would not make it.

“I have a problem with my travel documents. I’m going to miss the special occasion,” Reynaldo told Rappler.

He said he was happy for his daughter because Marcial “is very humble, helpful, and responsible.”

Marcial said he wanted his would-be bride to be happy given the hardships they went through when they were just starting their boxing careers.

He recalled that there were times that they had to divide whatever little food they had, take long walks because they didn’t have money for a jeepney ride, and pawn their belongings.

Since his bronze victory in the Tokyo Olympics, Marcial has received at least P7 million from the government and various sports patrons for his feat plus property rewards in Tagaytay and Zamboanga City.

Marcial has also signed a lucrative professional boxing contract with the Manny Pacquiao Promotions, according to Jalnaiz.

According to Jalnaiz, Pacquiao saw Marcial’s potential in professional boxing even before he fought in the Tokyo Olympics.

“He (Marcial) already signed a contract worth P10 million, if I’m not mistaken. So, starting a family is no longer a problem for them. Their marriage is a match made in heaven because Princess has been with the national boxing team and a national champion herself,” Jalnaiz said. –Rappler.com