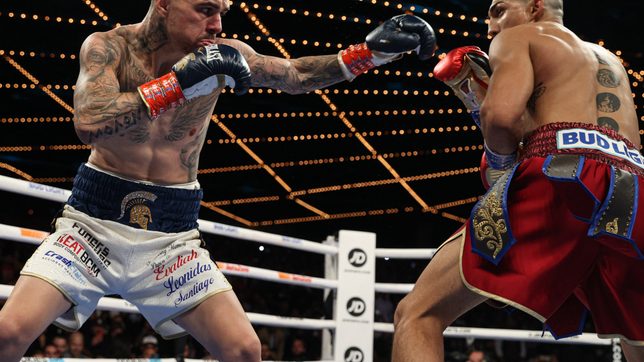 When George Kambosos Jr. first sparred with Manny Pacquiao in 2017, the recently retired boxing legend was impressed. When they sparred again the following year, Pacquiao told Kambosos what any boxer would die to hear – a world title is for his picking.

Partly because of the COVID-19 pandemic, Kambosos’ trek to the top took a little longer.

On Saturday, November 27 (Sunday, November 28, Philippine time), the Sydney-born Australian of Greek descent fulfilled his destiny and made a seer out of Pacquiao.

Defying the odds ranging from 6-1 to 15-1, Kambosos dropped the highly touted Teofimo Lopez in the first round, shook off a 10th round knockdown, and went on to snatch the IBF, WBO, and WBA lightweight crowns at the Hulu Theatre of Madison Square Garden in New York.

Even before the title duel, Kambosos (25-5 with 12 knockouts) had given Pacquiao credit for his development as an all-around boxer.

“Manny Pacquiao is a living legend, he’s done more than any boxer ever in the world,” Kambosos told the Sun-Herald. “I know I will be champion and he said it back in 2018. He said ‘You’re ready for a championship right now, you’re a world champion.’

“I said ‘Manny, my time is coming. I’ve been patient, I’ve bided my time, made all the right moves, and been very sharp and calculated.’”

Kambosos, who started his ring career with a shaky 5-5 record, absorbed all the lessons he learned as Pacquiao’s main sparring partner against Jeff Horn in Brisbane, Australia, in 2017, Lucas Matthysse in Kuala Lumpur, Malaysia in 2018, and Adrien Broner in Las Vegas in 2019, and supplemented them with his experiences.

“It (sparring with Pacquiao) gave me that extra bit of confidence in my head, knowing if I’m doing it with this legend, side by side with him for his 12-round championship fights, I know exactly what I have to do,” said Kambosos, who is on a 20-win streak since 2013.

According to Kambosos, doing 250 rounds with Pacquiao, hanging around with him, and seeing the things he do, was an invaluable experience.

After Kambosos has accomplished his mission, Pacquiao tweeted: “Congratulations to my friend, @georgekambosos, on an epic win! You helped me in so many of my past fights, I hope our hundreds of rounds of sparring helped you in some way tonight. I’m proud of you. #LopezKambosos”