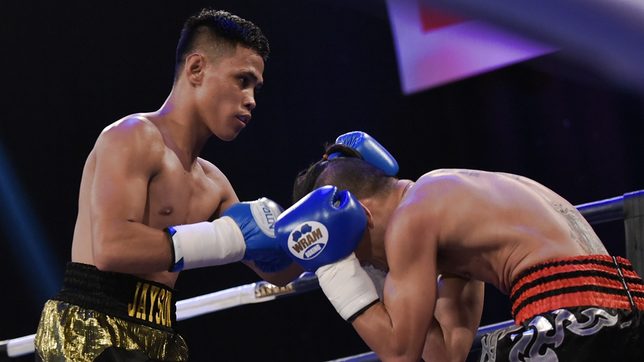 Facebook Twitter Copy URL
Copied
Although Filipino fighter Jayson Mama has the edge in power over Sunny Edwards, the icon from London remains favored to defend his flyweight title

Twice denied the chance to challenge for the title, the pride of General Santos City gets his due on Saturday, December 11, when he tangles with Edwards, also unscathed, at the Coca-Cola Arena in Dubai, United Arab Emirates.

Although Mama (16-0, 9 knockouts) has the edge in power over Edwards (16-0, 4 knockouts), the icon from London has been tagged the favorite in the 12-rounder.

Mama and Edwards were supposed to clash on September 11, but the boyish-looking champion pulled out due to an ankle injury.

In April, Mama stepped aside to allow Edwards to challenge and beat legendary South African Moruti Mthalane for the IBF title.

Both Mama and Edwards tipped the scales at 111.5 pounds on Friday, indicating the hard work they have put themselves into for Probellum’s first fight card presentation.

Unlike Mama, Donnie Nietes is tagged the huge favorite to beat Norbelto Jimenez of the Dominican Republic in their World Boxing Association super flyweight eliminator. (READ: Nietes feels ‘like 29’ heading to world title eliminator with Jimenez in Dubai)

Nietes checked in on the dot at 115 pounds while Jimenez came in a bit lighter at 114.6. – Rappler.com