Facebook Twitter Copy URL
Copied
Determined to pursue a boxing career, Jimuel Pacquiao has chosen to remain in the United States to train and compete in junior welterweight

The 20-year-old son and namesake of Manny Pacquiao, the sport’s only eight-division world champion, engaged Rosales in fierce exchanges and landed the clearer hits to earn the nod of the judges in the three-round junior welterweight bout held before a sold-out crowd at the House of Boxing Training Center in San Diego, California.

Determined to pursue a boxing career, the younger Pacquiao chose to remain in the United States to train after his father lost to Yordenis Ugas in August 2021 and eventually retired to run for the Philippine presidency.

With Marvin Somodio as his main trainer, Jimuel was able to secure his US boxing license in December. 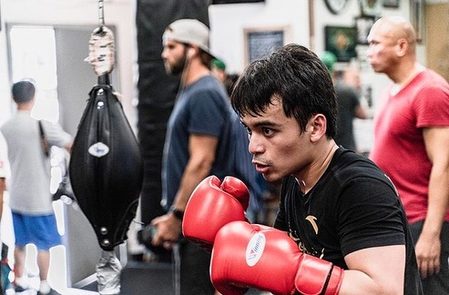 Jimuel had fought as an amateur back home, compiling a 4-1 record, including a knockout win over Miguel Egan and two victories over Lucas Carson.  He lost by split decision to the more experienced Ken Danila of Imus, Cavite.

Apart from getting fighting tips from his father and Roach, Jimuel also got the chance to train alongside the current pound-for-pound king Canelo Alvarez in Los Angeles.