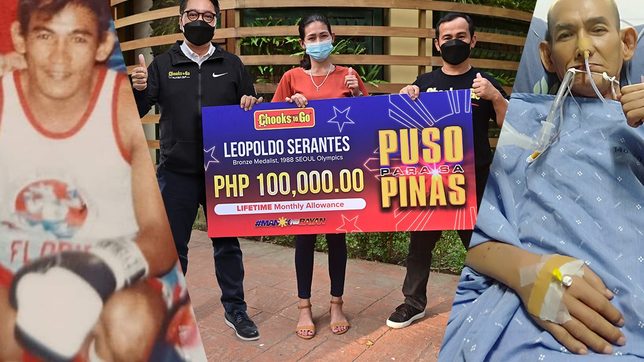 Facebook Twitter Copy URL
Copied
In 1988, Leopoldo Serantes’ Olympic bronze weighed as much as gold as the Philippines celebrated the end of a 24-year medal drought

As Filipino athletes battled the world’s best in the Tokyo Olympics and gave the country an unprecedented medal haul in the quadrennial sports spectacle, a former Olympian was engaged in his own battle against a more formidable foe as he lay in bed at the Veterans Memorial Medical Center.

Photos of him circulating in the media, frail and thin with tubes attached to his nose and mouth, was a sad image of a man who 33 years ago became the country’s most celebrated athlete.

Bicol native Leopoldo Serantes was a member of the national boxing team in the 1980s.

Host Thailand bagged nine out of the 13 gold medals up for grabs in boxing. Four Filipinos made the championship round. Only Serantes came out victorious.

What made his feat even more impressive was that he defeated a hometown bet, Supad Boonrowd, in the finale for the men’s 48kg gold medal.

Serantes successfully defended his SEA Games light flyweight title, one of only two Filipino boxers to emerge champion in the 1987 edition held in Indonesia.

Going into the 1988 Seoul Olympics, sports officials were upbeat about the country’s chances as 31 athletes in 11 sports represented the Philippines. The brightest hope for Olympic hardware was boxing, the same sport that delivered the Philippines’ last medal over two decades prior, a silver courtesy of featherweight Anthony Villanueva.

Villanueva returned home from the Unites States that year and joined the coaching staff of the national team. For the Summer Games in South Korea, the Philippines was fielding in six fighters, the country’s biggest ever boxing contingent to the Olympics.

Serantes was regarded a solid threat in the light flyweight division, but he was not the country’s strongest bet for a medal. Experts believed the best contender for a podium finish was a lightweight who shared the same first name as Serantes, Leopoldo Cantancio.

Cantancio at that point was a two-time SEA Games gold medalist. In the 1986 Asian Games, Cantancio brought home a silver. He made his first Olympic appearance in 1984 in Los Angeles where he won his first three fights. He was a win away from a guaranteed bronze when he was beaten in the quarterfinals by Chun-Chil Song of South Korea.

The light flyweight division was stacked in Seoul. It featured four fighters who would eventually become world champions in the professional ranks – Michael Carbajal of the United States, Wayne McCullough of Ireland, Scotty Olson of Canada, and Chatchai Sasakul of Thailand.

Sasakul would later on capture the WBC and lineal flyweight titles before losing them via knockout to Manny Pacquiao.

Also campaigning in the same 48kg division were 1985 World Cup gold medalist and 1986 World Championships bronze medalist Oh Kwang-Soo of the host country and 1980 Olympic bronze medalist Ivailo Marinov of Bulgaria. Serantes had his work cut out for him.

Between the two Leopoldos, however, it was Serantes, who progressed deep in the competition in the Seoul.

Jalnaiz was the only one whose fight went the distance. The other four lost in abbreviated fashion, with Cantancio getting knocked out cold in the first round by future undisputed light welterweight world champion and Hall of Famer Kostya Tszyu.

The then 26-year-old Serantes drew a bye in the round of 64. He came out swinging in his first bout in the Round of 32 as he stopped in the second round Moustafa Hassan of Egypt. He followed up his impressive debut with a dominant 5-0 decision over 19-year-old Sam Steward of Liberia.

Standing in the quarterfinals between the Filipino and a secured medal was Mahjoub M’jirih of Morocco, a 28-year-old veteran who was in his second straight Olympic stint.

Serantes made sure the fight would not go to the judges’ scorecards. He pummeled the Moroccan and forced the referee to stop the fight in the third round.

Serantes’ victory assured the Philippines of a bronze, the country’s first medal since 1964 and its third in boxing (Villanueva’s father, Jose, won a bronze in 1932). In the semifinals, Serantes ran into a brick wall in Bulgaria’s Marinov.

Marinov had one of the most impressive resumes in the light flyweight division. He won the world championship in 1982. He was also a two-time European champion.

The semifinal encounter between Serantes and Marinov turned out to be a one-sided affair. The Bulgarian constantly beat Serantes to the punch and proved to be the superior fighter. He would go on to beat Carbajal in the finals. Marinov won all his five fights in the Olympics via 5-0 decisions.

Serantes’ bronze weighed as much as gold as the Philippines celebrated the end of a 24-year medal drought.

He came home a hero. He was named the Philippine Sportswriters Association Athlete of the Year in 1988 along with Ariane Cerdena, who won gold in the Olympic demonstration sport of bowling.

Serantes’ time in the spotlight, however, proved to be short-lived. Like so many of the country’s sports heroes, he too has been relegated to irrelevance, with barely enough to even take care of his medical expenses as he fights chronic obstructive pulmonary disease.

Fortunately, Chooks-to-Go stepped in and committed to provide Serantes with a P100,000 monthly allowance for life. Bounty Agro Ventures Inc president Ronald Mascariñas said it was his desire to honor Serantes’ legacy and service to the country. Mascariñas called Serantes a living hero who deserved to live the rest of his life with dignity.

Serantes has not earned the same windfall that this year’s Olympic medalists will be rewarded with. Any financial assistance at this stage from the government and sports officials will no doubt be welcomed.

But one also gets a sense that these are rather late in the ballgame to really matter to someone who has been living close to obscurity the past 30 years.

Serantes deserves to be remembered, and he deserves to be immortalized for being, once upon a time, the country’s brightest sports star. – Rappler.com