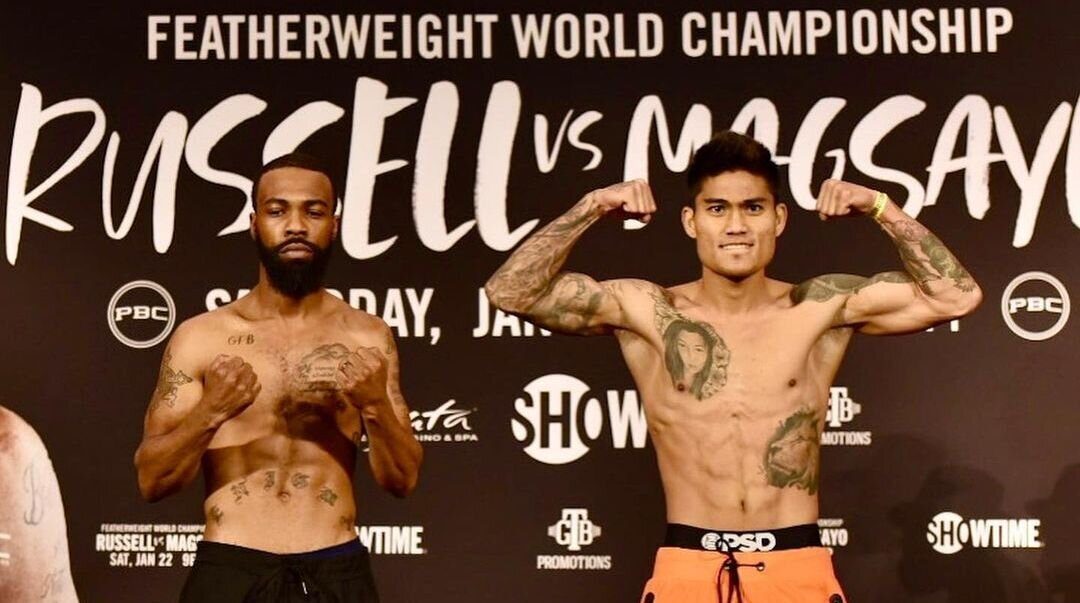 Facebook Twitter Copy URL
Copied
Mark Magsayo wants to prove he's the world's best featherweight even as the unbeaten Filipino has been tagged as the underdog against Gary Russell Jr., the world's longest-reigning champion

According to Magsayo, Russell didn’t even look at him in the eye during the official weigh-in on Friday, making him wonder what has happened to the world’s longest-reigning champion (since 2015) at present.

Magsayo, who checked in at light at 125.5 pounds, maybe right in his suspicion as Russell unusually needed a second trip to the scales to hit the division limit also at 125.5. On his first try, Russell weighed 126.5.

Of course, Magsayo considers weight a non-issue in his first crack at a world title after notching 23 straight wins, 16 by knockout.

The defining factors being Magsayo’s power and busyness against Russel’s speed and savviness which has led to 31 wins against a single loss to Vasyl Lomachenko with 18 knockouts.

While Magsayo said he is in optimum form under the guidance of head coach Freddie Roach and assistant trainer Marvin Somodio, Russell bared he’ll be saddled by a slight injury which he intends to disclose after the fight.

The 33-year-old Russell, who’ll only be making his sixth title defense in seven years, said he has trained basically by himself as his father and trainer, Gary Sr., had his left foot amputated due to diabetes complications and may be out of his corner for the first time since he turned pro in 2009.

Tagged as the underdog (+300) against Russell (-380), Magsayo said he’s out to hand Russell his second loss and prove he’s the world’s best featherweight.

According to Russell, however, he would be able to hurdle the best Magsayo can offer.

Already in high morale with the full support of MP (Manny Pacquiao) Promotions head Sean Gibbons, Magsayo’s spirits were uplifted even more when he got a call and words of encouragement from Pacquiao, his idol and benefactor, on Friday night.

Wary of Russell’s nimble footwork, Roach has instructed Magsayo to go inside and attack from the opening bell.

Roach will be assisted by Somodio and conditioning trainer Pedro Garcia at Magsayo’s corner.

His childhood dream of being a world champion within his grasp, Magsayo is determined not to let it slip away. – Rappler.com