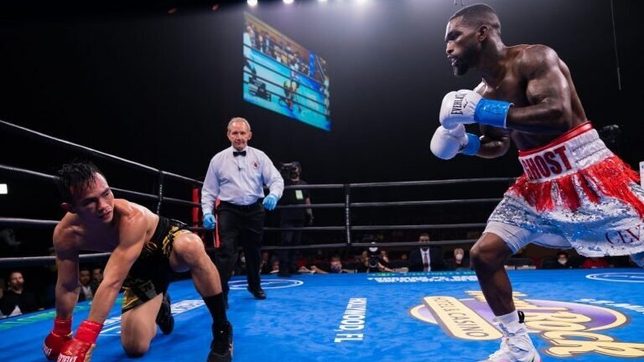 OUTCLASSED. Frank Martin sends Romero Duno down to the canvas in the fourth round.

MANILA, Philippines – The New Year started on a sour note for Filipino boxers as Romero Duno suffered a knockout loss to Frank Martin at the Seminole Hard Rock Hotel and Casino in Hollywood, Florida.

Outgunned by the unbeaten American prospect, Duno got clipped by a solid left coming in for the first knockdown in the fourth round, and seconds later caught the same punch from which he beat the count again but was in no shape to continue for their 10-round lightweight encounter on Saturday, January 1 (Sunday, January 2, Philippine time).

Referee Frank Santori Jr. halted the bout at the 2:54 mark, handing the southpaw Martin his 15th win with 11 knockouts and pulling down Duno to 24-3 with 19 knockouts.

Duno entered the ring hoping to extend his three-knockout streak after a shock 98-second knockout defeat to Ryan Garcia in 2019. He left it devastated, his future beclouded.

The first and second rounds hinted of the outcome as Martin, more mobile on his feet and quicker with his hands, landed combinations on Duno’s face.

Pressing forward throughout, Duno was able to sneak in two hard rights to Martin’s face in the decisive round, only to be tagged twice as he lunged.

The 26-year-old Duno came in at 135.8 pounds while Martin, a stablemate of unified welterweight champion Errol Spence Jr., checked in heavier at 137 pounds.