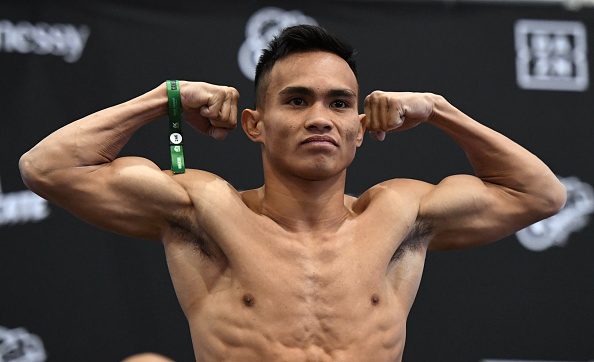 DOMINANT. Romero Duno seems to have regained his confidence two years after a shock loss to Ryan Garcia.

Showing no fear of Perez’s power, Duno sneaked in a hard right straight and was pummeling the veteran Colombian with more body and head punches before the second round ended.

With his left arm allegedly hurting, Perez did not answer the third round bell rewarding Duno with a technical knockout victory at the 2:59 mark of round 2.

It was the third straight win for Duno, who needed only one round each to dispose of Angelito Merin in February and Ramon Elizer Esperanza last month after a humiliating first-round knockout loss to Ryan Garcia in 2019.

The 25-year-old Duno, who hails from Cotabato City, raised his record to 24-2, with 19 knockouts. Perez suffered his fifth straight defeat and fell to 38-28 with 30 knockouts.

Duno, who underwent two months of rigid training under Cuban coach Osmiri Fernandez, checked in at 135.6 pounds on Thursday and was clearly bigger and more powerful than Perez, formerly a featherweight regional titlist.

Sanman Promotions head JC Manangquil believes Duno has recovered his confidence from the Garcia shocker and plans to pit his ward against a tougher opponent before the year ends. – Rappler.com