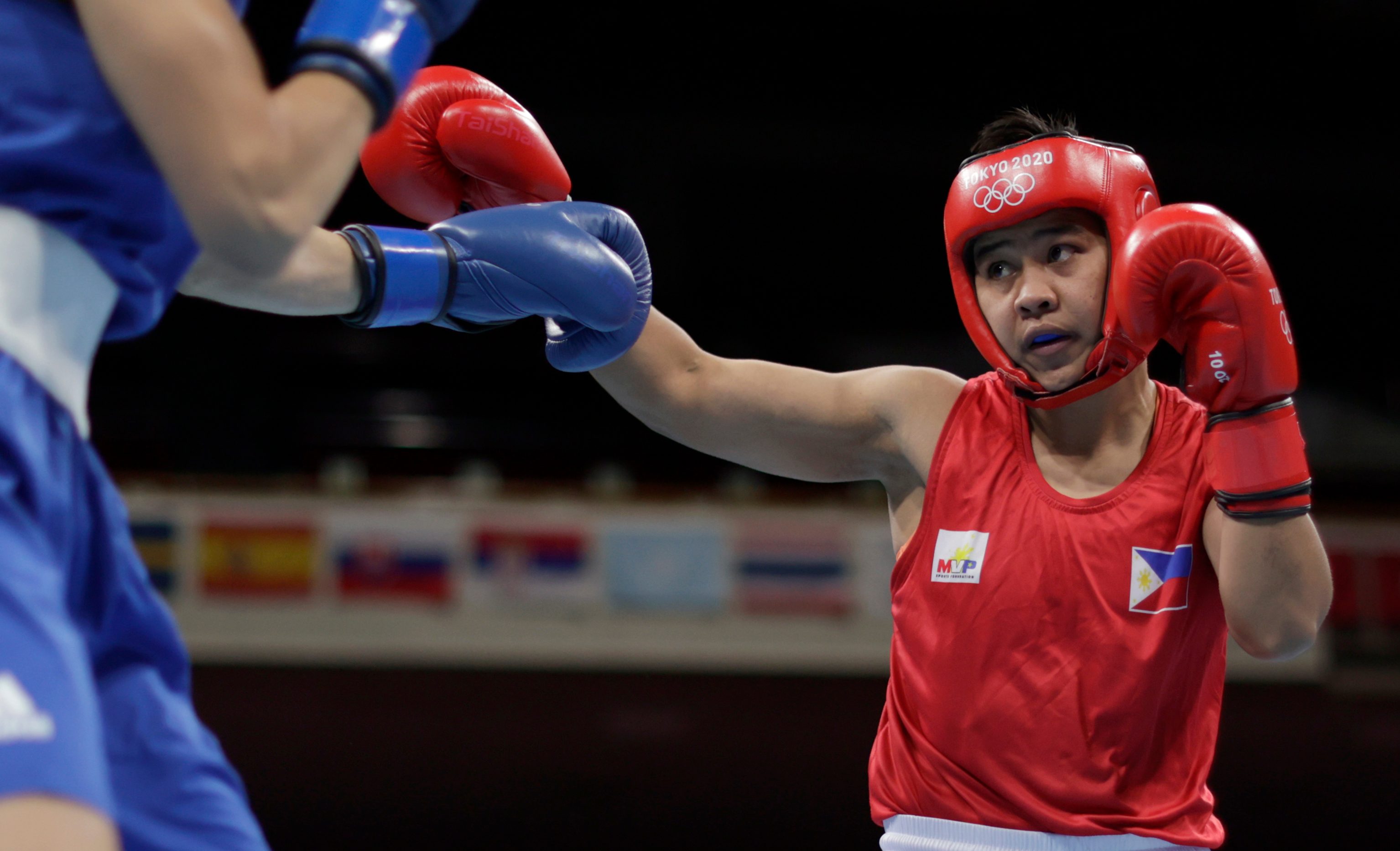 CLOSE TO HISTORY. Nesthy Petecio is a win away from winning the Philippines' first Olympic gold medal in boxing.

One more win and Nesthy Petecio will add another gold medal to the Philippine campaign in the Tokyo Olympics that has already been unprecedented.

Local bet Sena Irie will be standing across the ring from Petecio as they contest the women’s featherweight top plum. The 21-year-old Japanese will be looking at not only defending her home turf, but also becoming just the third Japanese to win a gold in boxing.

Petecio, meanwhile, could become the first ever boxing gold medalist for the Philippines after the silver medals won by Anthony Villanueva in 1964 and Mansueto “Onyok” Velasco in 1996.

While Petecio has seemingly gone through the gauntlet on her way to the finals given the high level of world-ranked opposition she has faced, Irie’s path has not been fraught with as much threat and danger.

Petecio eliminated in the round of 16 world No. 1 Lin Yu-Ting of Chinse Taipei, projected by the Associated Press (AP) as the likely Olympic gold medalist. In the quarterfinals, Petecio got back at her tormentor in the 2018 World Championships, Yeni Arias Castaneda of Colombia.

To get to the finals – set on Tuesday, August 3, at 12:05 pm, Philippine time – Petecio had to take out Italian Irma Testa, who at that point had the most impressive run in the tournament. Testa had earlier defeated Liudmila Vorontsova of Russia, predicted by AP as the possible bronze medalist, and Michaela Walsh of Ireland, AP’s bet for the silver medal.

On the other hand, Irie looked impressive in her opening bout as she downed Yamileth Solorzano of El Salvador via unanimous decision. She followed it up with another 5-0 shutout over Khouloud Hlimi Ep Moulahi of Tunisia. In the quarterfinals, Irie escaped with a 3-2 split decision over Maria Claudia Nechita of Romania. None of the three opponents Irie faced is in the top 30 of the AIBA world rankings.

It was only in the semifinals that Irie finally faced a fighter of pedigree. In a close contest that could have gone either way, the Japanese eked out another 3-2 split over world No. 5 Karriss Artingstall of Great Britain.

Petecio has also scored a victory over Artingstall when they faced each other in semifinals of the 2019 World Championships. She won 4-1 on her way to the finals, where she became the world featherweight champion. In that same tournament, Petecio crossed paths with Irie in the quarterfinals. The Davao native earned a 4-1 decision.

There has been talk that Irie appears to be Petecio’s “kontrapelo,” forwarding the idea that the Japanese has seemingly figured out her Filipina counterpart. The truth is that in the two fights that Irie won over Petecio, the verdict were 3-2 split decisions that were too close to call.

In the only fight that Petecio won over Irie, the Filipino southpaw bore her way through the Japanese’s defense. Petecio was able to force the action by trapping Irie on ropes and at the corners, forcing the Japanese to abandon her jab and engage in a slugfest. When they did engage, Petecio caused a lot of damage with her heavier blows. The Davao native will have to do more of the same in the finals.

Irie usually has her left hand held high up, ready to flick the jab, with her right hand on the lookout to throw at the approaching target. When she is able to dictate the pace of the fight, Irie is perpetually moving side-to-side, rarely allowing herself to be a stationary target.

Petecio will need to dictate the pace of the fight in the finals. Her feints and counters are potent, but these will be neutralized if she gives Irie the entire ring to dance around. She has proven through the years that she can go toe-to-toe with any featherweight in the world. Petecio also knows she can withstand Irie’s best shots.

The finals will be a typical match-up between the boxer in Irie and the slugger in Petecio.

Expect Irie to try to control the distance and utilize the entire ring to move around and throw her vaunted counters. In a close fight, Irie could pull off a win with her ability to dart in and out. Irie often hits and evades and impresses the judges with her mobility and activity.

Petecio’s chances lie heavily on how she can cut the ring and limit Irie’s movement. Petecio must be prepared to fight every second of every round and not give Irie any room to breathe. Constant pressure will leave Irie with no other choice but to let her hands go. That will give Petecio the opening to unload her heavy bombs. If the fight becomes a brawl, there is no way Irie can keep up with Petecio’s power and speed. – Rappler.com