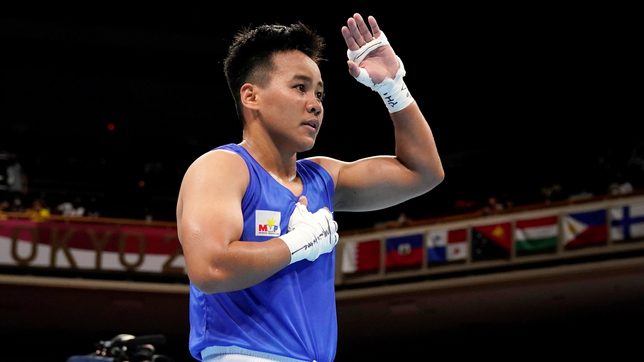 TWO MORE WINS. Although already guaranteed of at least a bronze, Nesthy Petecio keeps her sights on an Olympic gold medal.

Another Filipina is on the verge of making Olympic history as Nesthy Petecio is just two wins away from clinching the Philippines’ first boxing gold medal in the Summer Games.

Guaranteed of at least a bronze in Tokyo, Petecio will gun for a finals spot in the women’s featherweight class when she tangles with Irma Testa of Italy in the semifinals on Saturday, July 31.

As she locks horns with Testa, Petecio will be drawing inspiration from weightlifting star Hidilyn Diaz, who became the first Filipino to win an Olympic gold medal.

“I was really inspired by Hidilyn. I really waited for her event to finish. We are overjoyed and we are very proud of Hidilyn,” Petecio said in Filipino. Petecio, however, does not want to get ahead of herself even with a shot at etching her mark in Philippine sports lore.

The 29-year-old remains cautious as the significantly taller Testa is built like tournament top seed Lin Yu-Ting of Chinese Taipei.

Although Petecio upset Lin in the round of 16, Testa has proven to be a formidable opponent after dismantling Caroline Veyre of Canada, 5-0, to reach the semifinals.

“We have to take it one fight at a time or we might stumble,” Petecio said.

“She’s similar to the Taipei girl but she hooks and sways back. So we’re going to take a counteract move,” Abnett said.