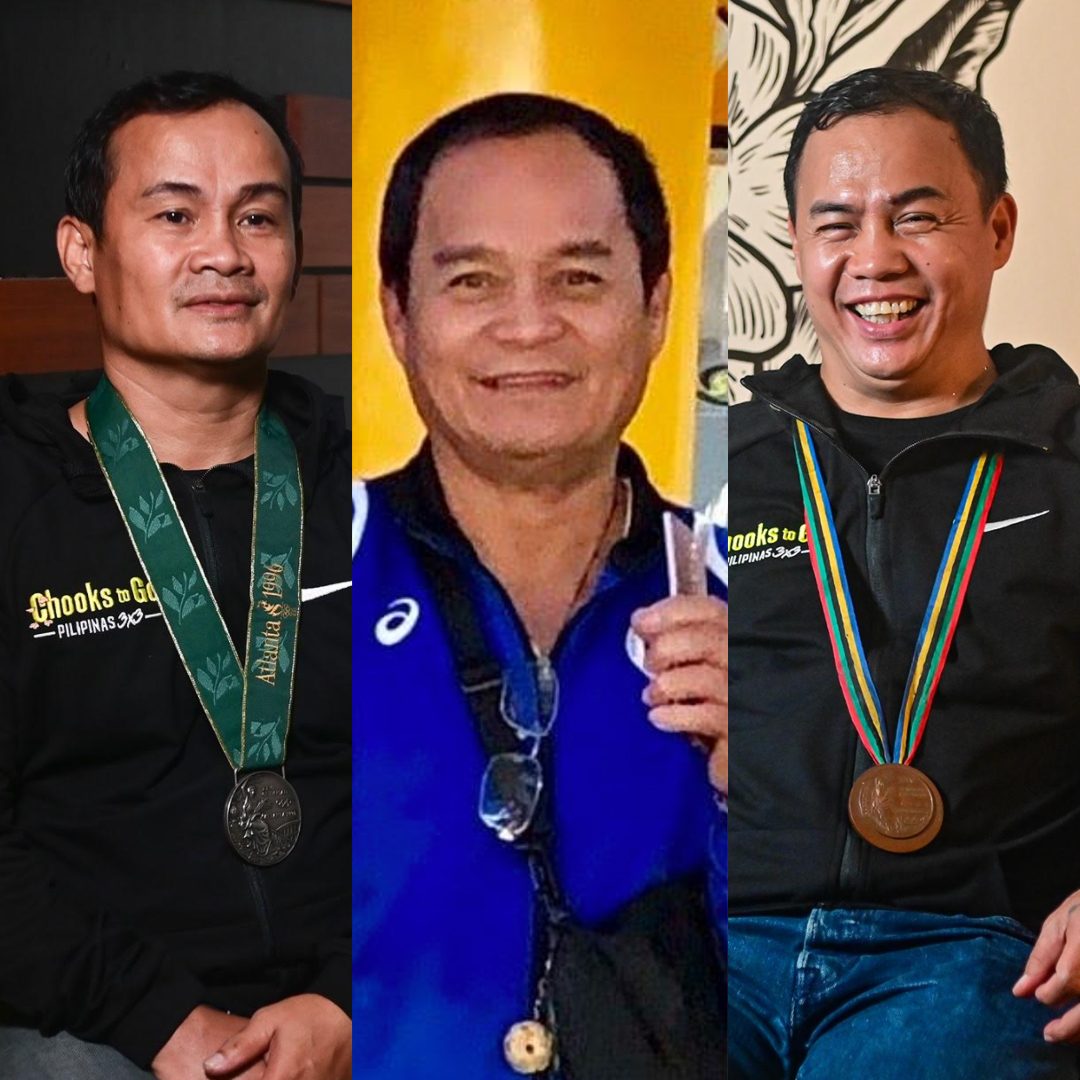 BOXING'S BEST. Olympians run in the Velasco family as brothers (from left) Onyok, Nolito, and Roel shine in the big stage.

After Nesthy Petecio won a silver in the Tokyo Olympics, she promptly paid tribute to a mentor who was instrumental to her success.

Coach Nolito “Boy” Velasco is a long-standing member of the Philippine boxing team coaching staff. He is no stranger to Olympic medals, having guided two other boxers in 1992 and 1996 to podium finishes in the quadrennial games.

In that sense, Velasco is a multiple Olympic medalist himself, albeit in a different capacity as the man behind the scenes – the one who holds the mitts, who teaches, scolds, and counsels, and who provides the voice of guidance in between rounds at the corner.

As accomplished as Velasco is, he is not the only one in his family who boasts of international credentials. The two other boxers he guided to Olympic glory were actually his younger siblings.

Nolito’s younger brothers, Roel and Mansueto – better known as Onyok – are two of the most decorated boxers to ever lace the gloves for the country in international competitions.

From 1988 to 1996, the Philippines was home to some of the best amateur boxers in the world in the lower weight divisions.

Leopoldo Serantes brought home a bronze medal from the 1988 Seoul Olympics. Roel replicated Serantes’ feat by winning another bronze in the 1992 Barcelona Olympics. Onyok capped off Philippine boxing’s three-peat medal streak by bagging a silver in the 1996 Atlanta Olympics.

All three of them campaigned in the 48kg light flyweight division.

Roel finished with a bronze medal when he was 20 years old in the 1989 Southeast Asian Games in Malaysia after losing in the semifinals to Songsak Kaenthao of Thailand.

He would get his vengeance on the Thai that same year when the Philippines staged the Mayor’s Cup. Roel defeated Kaenthao in the semifinals. In that same tournament, Roel had to face off with his younger brother, the then 15-year-old Onyok, in the quarterfinals. The older Velasco prevailed decisively, 5-0.

Just before the 1992 Olympics, Roel copped the gold in the Asian Amateur Boxing Championships, a clear display of his readiness to give the big names in the light flyweight division a run for their money in Barcelona. In the Olympics, Roel won three bouts to make it to the final four.

He badly outclassed James Wanene of Kenya, 16-1, to advance to a second encounter with world No. 7 Rajendra Prassad of India. Roel dispatched off the Indian bet, 15-6.

In the quarterfinals, Roel scraped past Rowan Williams of Great Britain to earn for himself a guaranteed medal. He was stopped on his tracks in the semifinals by eventual gold medalist Rogelio Marcelo of Cuba – a two-time World Championships silver medalist – via referee stoppage in the first round.

Roel remained active in the ring until his late 20s. In 1997, he produced gold-medal performances in three prestigious competitions – the Italian Boxing Championships, the first Muhammad Ali Invitational Boxing Championships in the US, and the Roberto Balado Cup held in Cuba. That same year, he earned a silver in the world championships.

Onyok was a boxing prodigy. In his mid-teens, he was already being pitted against boxers in the seniors division. He would regularly beat them. At just 17 years old, Onyok was already one of the top light flyweights in the continent. He won gold in the 1991 SEA Games.

In the 1994 Hiroshima Asian Games, Onyok defeated Barcelona Olympian Pramuansak Phosuwan of Thailand in the finals. He was among the three gold medalists for the Philippines, the others being flyweight Elias Recaido and light welterweight Reynaldo Galido, who’s currently a member of the Philippine boxing team coaching staff.

The Philippines emerged then as the best performing country in boxing in the Hiroshima Games. Onyok was only 20 years old.

The 1996 Olympics was the stage that cemented Onyok’s place among boxing legends. He blitzed past his first two fights, stopping Chih-Hsiu Tsai of Taiwan in the first round and outpointing by a wide margin (14-5) one of the favorites in the division, Yosvani Aguilera of Cuba.

For his third bout, he faced a formidable foe in two-time Olympian and world championship bronze medalist Hamid Berhili of Morocco. Once again, Onyok dominated the fight to earn a comfortable 20-10 decision and earn a spot in the medal round.

Onyok next faced Rafael Lozano of Spain. Lozano competed in the 1992 Olympics in Barcelona where he lost in the quarterfinals to Marcelo of Cuba. Lozano was also a bronze medalist in the European Championships. None of these credentials intimidated Onyok, who beat up the Spaniard from pillar to post en route to a dominant 22-10 victory and a berth in the finals.

Standing in Onyok’s path to an Olympic gold was Daniel Bozhilov Petrov of Bulgaria, the 1992 Olympic silver medalist, the 1995 world championship gold medalist, and 1996 European champion. The Bulgarian was five years older and enjoyed a five-inch height advantage over the 5-foot-1 Onyok.

All fights up to the semifinals had boxers using 8oz gloves. Because of the high number of knockouts happening in the boxing competition, officials decided to have boxers use 10oz gloves in the finals. This was meant to protect boxers from incurring possible heavy punishment and damage.

Onyok, of course, favored 8oz gloves since he was the bigger puncher and relied on his power to batter opponents. How that affected the finals between him and Petrov will forever haunt Filipino boxing fans.

The Velasco brothers, who come from Bago, Negros Occidental, have contributed immensely to the development of the sport in the country and have brought so much honor to the Philippine flag.

The Velascos are Philippine boxing royalty. Their names will be perpetually attached to the Olympics for it was in these games that the three – Nolito, Roel, and Onyok – earned their regal stripes as Philippine sports heroes. – Rappler.com