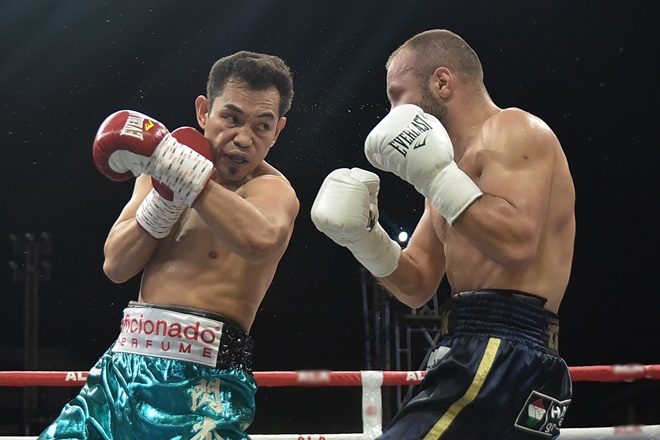 Facebook Twitter Copy URL
Copied
French Nordine Oubaali has been installed the favorite over Nonito Donaire, but the Filipino Flash remains one of the strongest hitters even at 38

Nonito “The Filipino Flash” Donaire Jr seeks redemption when he tangles with Nordine Oubaali for the World Boxing Council bantamweight crown on Saturday, May 29 (Sunday, May 30, Philippine time) at the Dignity Health Sports Center in Carson, Calfornia.

On October 18, 2014, Donaire also fought at the same venue, then known as StubHub Center, and got knocked out in the sixth round by then-unbeaten Jamaican Nicholas Walters in their battle for the World Boxing Association super featherweight belt.

That time, Donaire found out he didn’t carry his power at 126 pounds and eventually slid back to 118 where he remains to be one of the strongest hitters at 38 years old.

Already a four-division champion and future Hall of Famer, Donaire wants to add another chapter to his ring legacy by testing the mettle of the unscathed French champion (17-0 with 12 knockouts).

Donaire: ‘I am snatching that WBC belt’ The 34-year-old Oubaali, who counts among his knockout victims Filipino Arthur Villanueva in 2019, has been installed the favorite over Donaire in the headliner of the Premier Boxing Champions event to be staged by Showtime before a limited crowd. Tickets are priced from $50 to $200.

Although Oubaali holds a higher KO percentage of 70.59 over Donaire’s 65, the Filipino Flash is noted for his counter left hook that dropped Armenian Vic Darchinyan in 2007 and earned KO of the Year honors.

Donaire wants another crack at Inoue and he will surely get it once he disposes of Oubaali, who also has his sights set on the Japanese “Monster.” – Rappler.com