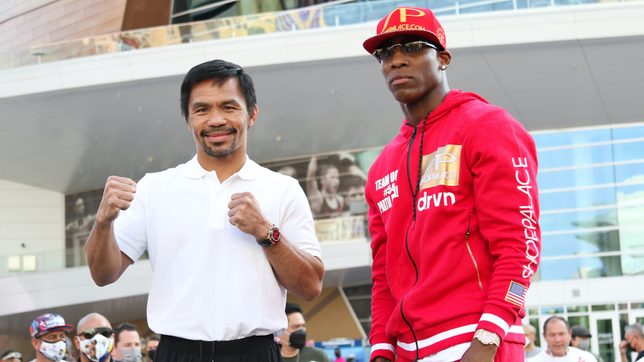 FACE-OFF. Manny Pacquiao and Yordenis Ugas grace an event at the Toshiba Plaza in front of T-Mobile Arena in Las Vegas on Tuesday afternoon.

Facebook Twitter Copy URL
Copied
‘I can't imagine what I had done. After 20 years I am still here and that's a gift from God,’ says Manny Pacquiao

As Manny Pacquiao looked down on the 29th floor of his suite at MGM Grand here, he couldn’t help but feel nostalgic.

“Iba na (It has changed),” said Pacquiao, referring to the city’s landscape now dotted with skyscrapers.

He remembered the time when he broke into the mainstream boxing scene with a sixth-round knockout of South African great Lehlo Ledwaba also at MGM Grand.

Now, 20 years later, when virtually all of his contemporaries have retired, became trainers, analysts or broadcasters, Pacquiao suddenly realized the enormity of what he had accomplished not only in boxing but in life.

“I can’t imagine what I had done. After 20 years I am still here and that’s a gift from God,” Pacquiao said. “Still strong. We are still here and being protected.”

Pacquiao, despite being 42 years old, remains to be one of the most renowned and bankable fighters.

His “Fight of the Century” with Floyd Mayweather Jr. in 2015 accounted for a record 4.6 million pay-per-view purchases and nearly $500,000 million in revenues while his battles with Oscar De La Hoya, Miguel Cotto, Shane Mosley, Antonio Margarito, and Juan Manuel Marquez also raked in millions.

Expectations were rife Pacquiao’s battle with Errol Spence Jr., supposedly on Saturday, August 21 (Sunday, August 22, Philippine time) at the T-Mobile Arena would be a blockbuster, but it fell through. Spence pulled out due to a retinal tear and got replaced by Yordenis Ugas, who is far from being a crowd-drawer.

No wonder, from being against an underdog against Spence, Pacquiao became the bettors’ choice over Ugas in his 22nd Las Vegas fight. Famished as he worked out at Wild Card Boxing Club before heading to Las Vegas, Pacquiao ate heartily and said he weighed around 150 pounds, just 3 over the limit.

Pacquiao could easily shed the excess weight when he does a light training session on Tuesday.

According to conditioning coach Justin Fortune, Pacquiao will run Wednesday morning then take the rest of the day off.

It will be full rest on Thursday and again on Friday when the official weigh-in will be held.

It’s hard to imagine, Pacquiao has been doing this routine for 20 years and remains on top of his game. – Rappler.com