Pacquiao: 'I felt I was set up' 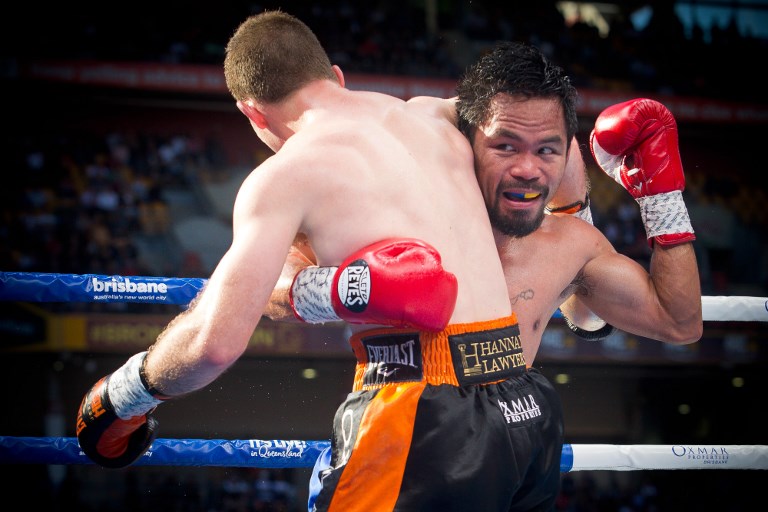 BRISBANE, Australia - Manny Pacquiao has taken his criticism of the officiating a step further, telling reporters he felt he was “set up” in the Jeff Horn fight.

Pacquiao, who did not attend the post-fight press conference as he had two cuts on the top of his head stitched up following his unanimous decision loss to Horn on Sunday, July 2, addressed reporters aboard his Air Asia flight from Australia’s Gold Coast to General Santos City.

Pacquiao did not immediately protest the decision in the ring afterwards, saying “That’s the decision of the judges, I respect that.” But Pacquiao shortly after began voicing his displeasure with the judges’ verdict, which had been widely panned by boxing observers and sports commentators, telling reporters he deserved the decision.

“It's clear, even if you review the fight,” Pacquiao said afterwards.

Promoter Bob Arum, who will co-promote Horn alongside New Zealand's Duco Events, said he felt a case could have been made for either man winning the fight. Trainer Freddie Roach called it a "pretty close fight," but called into question the scorecard of New York's Waleska Roldan, who scored the fight 117-111 in favor of Horn.

"At least in America where you get odd scores like that with the judges, the head commissioner should ask at some point, ‘Why? Where? Show me how you came up with that score,'" said Roach to the Daily Telegraph. The other two judges scored the fight 115-113 in Horn's favor.

Roach and Pacquiao both called into question the performance of referee Mark Nelson.

"The wrestling, getting hit behind the head a lot, it didn’t look good, but the referee didn’t pay any attention to it," said Roach.

"I don’t want the referee to favor me. I want the treatment for me (and Horn) to be the same. If I lost I lost, if I won I won," said Pacquiao in Tagalog.

The loss was Pacquiao’s fourth in his last 9 fights. Roach said he was leaning towards suggesting to Pacquiao that he retire after 22 years in the ring, saying “I’m going to talk to Manny about maybe calling it a day, maybe this is it.”

The fight was attended by an announced 51,052 fans at Suncorp Stadium in Brisbane, Australia, the highest attendance for any Pacquiao fight. The win elevated Horn’s record to (17-0-1, 11 KOs). – Rappler.com