GENERAL SANTOS CITY, Philippines – Manny Pacquiao has won world titles in divisions as high as junior middleweight, but his trainer Freddie Roach says he will step down to the junior welterweight division after his upcoming fight with Chris Algieri.

Pacquiao, 35, is currently in the early stages of training for his November 23 fight at The Venetian in Macau against Algieri (20-0, 8 knockouts), which will be the first defense of his WBO welterweight title. The fight will be fought at a catchweight of 144 pounds to test Pacquiao’s performance at a lower weight before they move down to 140 pounds.

Roach, a 6-time Boxing Writers Association of America Trainer of the Year, added: “He’s not a 147-pounder, he only forced himself to be a 147-pounder because that’s where the money was but I think he’s going to be a much more effective fighter at 140. I don’t care who is there, we’ll beat them all.”

The current Ring magazine champion at 140 pounds, Danny Garcia (29-0, 17 KOs), has stated his intentions to move up to the welterweight division after an uneventful 2014, which saw him struggle in a majority decision win over Mauricio Herrera in March, before knocking out overmatched fringe contender Rod Salka in two rounds in a non-title bout in August.

Some of those fighters are already contemplating moving up to 147, but Roach believes they’ll reconsider when Pacquiao – and the high purses to fight him – move into the neighborhood.

The issue of what fighting at 140 pounds would mean to Pacquiao’s legacy didn’t immediately concern Roach.

“He’s an 8-time world champion; his legacy is already set. I’m not worried about that,” said Roach.

But when pressed on who he thought would be a worthy opponent for Pacquiao, he pointed to the division’s top name.

“I like that fight,” Roach said of the 26-year-old Philadelphia native Danny Garcia. Roach then addressed the politics of boxing, saying he believes that Garcia’s advisor Al Haymon – who also handles Floyd Mayweather Jr – will prevent the fight from happening.

“Al Haymon will not fight Manny Pacquiao, guarantee that. Because they’re scared, all of them. His lead guy all the way down. It’s not going to happen. All of the excuses about they don’t like Bob Arum; it’s just excuses.

“Al Haymon, I met him twice, he’s a very nice guy but I don’t think he’s good for boxing.”

Garcia's biggest wins have been over Lucas Matthysse, Amir Khan and Zab Judah.

Roach has been in the opposite corner from Garcia before, working with Khan when Garcia came from behind to knock out Roach’s ward in the fourth round to unify the WBC and WBA titles in 2012.

That was the fight that introduced Garcia’s father and trainer, Angel Garcia, to the world. Roach credits Angel Garcia with taking Khan out of the game mentally before the fight. Angel Garcia attacked Khan’s ethnicity and Muslim faith, saying that he had never met a Pakistani who could fight and adding, “His God is punishing; my God is loving."

Khan took an early lead before a left hook from Garcia dropped him in the third round and was stopped shortly after. 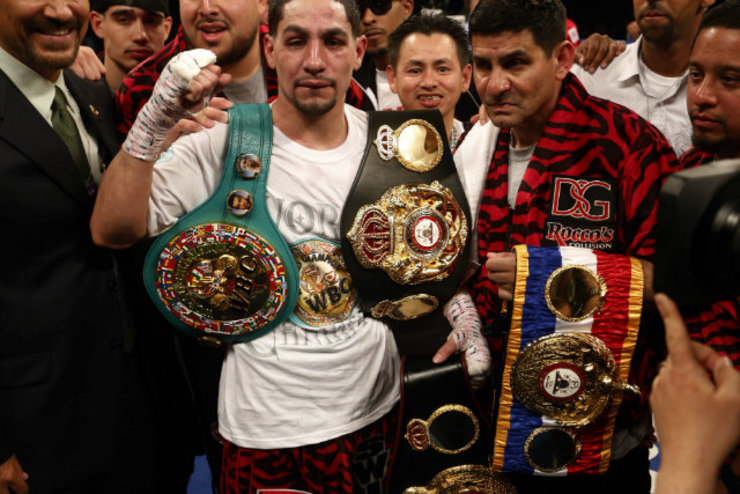 Danny Garcia would be the biggest fight for Pacquiao at 140 pounds.

“His Dad’s a little bit crazy – he’s my friend and a good guy – but he’s just doing what he’s supposed to do, he’s taking guys out of their element,” said Roach. “He talks a lot of shit and I think that’s honestly how they beat Amir Khan.”

Roach says that should a fight transpire between the two pound-for-pound candidates, that trash talk would have no effect on his fighter.

“I would just laugh at him,” said Roach. “Manny Pacquiao doesn’t give a shit about trash talk. It won’t affect him in the slightest.”

Rethinking his stance, Roach then amended his prospects for the fight: "Believe me, he’ll come down to 140 if Manny goes to 140."

The gym was considerably quieter on Wednesday as Pacquiao took a day off to rest from training. Roach and conditioning coach Justin Fortune had voiced their concerns over Pacquiao over-training himself, and after he finished running the track in the 88-degree weather, Roach told Pacquiao to take a break.

“It started from the run this morning. We had a little bit of a late start today. The sun came out, it was really warm for everyone. We actually cut the workouts down a little bit because it was too hot. Manny went home and his body was sore.”