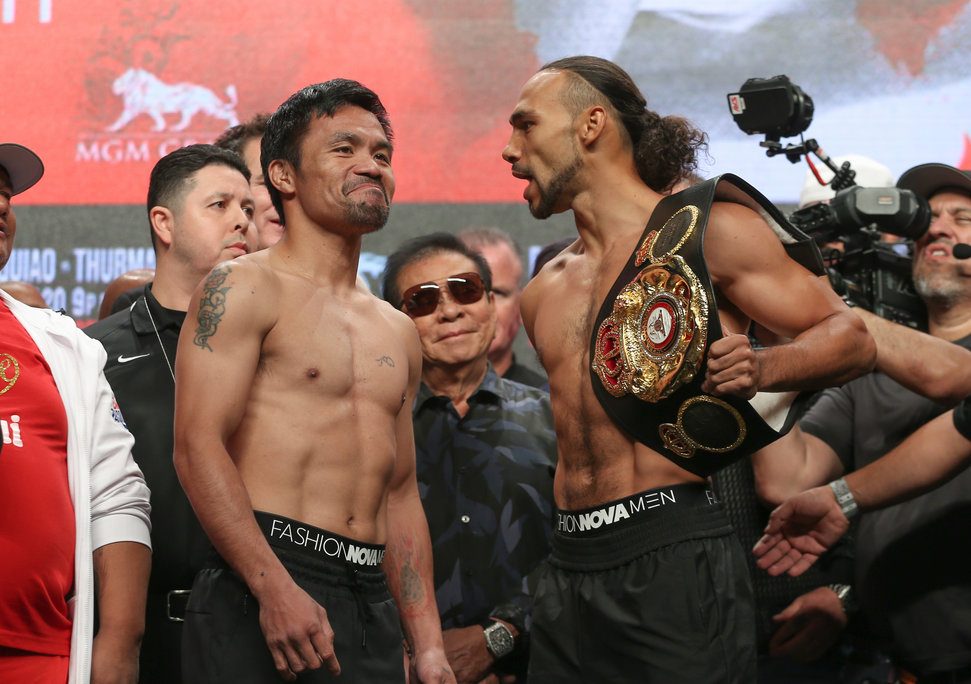 Facebook Twitter Copy URL
Copied
‘Veterans can just outplay you, they can do things and Pacquiao… he’s been through everything,’ says Keith Thurman, who yielded his WBA belt to Manny Pacquiao in 2019

Keith Thurman must have watched, studied, and analyzed his fight with Manny Pacquiao two years ago countless times.

The way he broke it down at the media center on Friday, August 20 (Saturday, August 21, Philippine time) was so detailed and animated sportswriters can visualize what’s running through his mind.

If only he did not commit those little lapses, maybe he would have emerged the split decision winner. Not the other way around.

On Saturday night at the T-Mobile Arena here, it will be Yordenis Ugas’ turn to experience sharing the ring with Pacquiao, boxing’s only eight-division world champion.

Thurman can only offer some suggestions and hope they would work.

“If he’s able to do that, I was doing it a little bit, hence that body shot in the 10th round, Pacquiao was like I can do it too, bam. We just got to see, I was big. It was easy to just walk into Pacquiao, with my hands up, I was taking a lot of that. He knocked me down going back.”

The pivotal first-round knockdown happened when Pacquiao sneaked in a left to the body followed by a right to the head.

And in that fateful 10th, when Pacquiao sent him gasping for breath and retreating to survive.

“The punch angles, even though luckily, it made me smile. I love his tricky uppercut, I just love it because I do it with people in sparring all the time,” said Thurman. “I felt like it was a veteran move like inside me I was like yeah I know that move Manny, nice little move. It’s like being in the poker table and bluff with.” 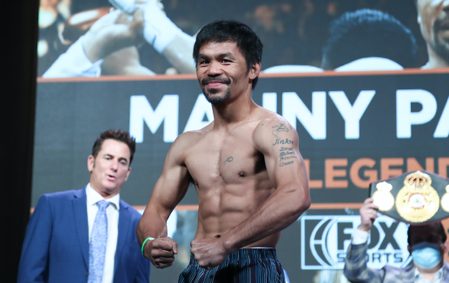 The 32-year-old Thurman can only marvel how Pacquiao at 42 can still challenge champions like Ugas, the World Boxing Association titlist, and still be tagged as the favorite.

“He’s a legend among legends. We have to acknowledge this is two years since his performance with me. He did take damage in that fight, let’s acknowledge it,” he said.

Even then, however, Thurman feels Pacquiao will be able to spring surprises because of his hand and foot speed coupled with the weird shots he’s firing.

“But Manny Pacquiao, his angles, he’s already a small guy. The moment he puts his hands up, I said to myself what can I hit, the target, that’s so small. It’s like a game, and like here’s the target and then you up the difficulty, and there goes the target.” Thurman, who was unbeaten when he tangled with Pacquiao for the WBA super welterweight crown, again gave a suggestion.

“I think Ugas might have a punch for that. People who have longer reach, when they throw uppercuts, when people have longer arms, their uppercuts naturally get to go a little lower. I think if Ugas gets into his uppercuts if he sees that its working and he lets that be a go-to punch, he might be able to do something in this fight tomorrow (Saturday).”

Unfortunately for Ugas, he isn’t long as Thurman thought he would be. While Ugas is two inches taller than Thurman at 5-foot-9, the Cuban only has the same reach (69 inches).

Furthermore, Thurman is perceived to be faster than Ugas.

Thurman thinks Ugas, just like him, will “make a lot of facial expressions” Saturday night to convince people he’s not a “paper champ” and is a worthy adversary.

In doing so, however, Ugas will be putting himself in danger.

“Ugas has to be careful, Pacquiao has trained himself throughout the years taking advantage of fighters out of position. So he has to do his best to stay solid and not get out of position, and not let Manny do what he does best.”