READY. Manny Pacquiao says he has no problem switching styles in less than two weeks.

Facebook Twitter Copy URL
Copied
‘I've faced so many strong opponents to get to where I am,' says last-minute replacement Yordenis Ugas as he battles the favored Manny Pacquiao

Manny Pacquiao feels he got robbed of his belt. Now he wants to reclaim it from Yordenis Ugas.

“Ugas is a champion because they gave him my belt. Now, we have to settle it inside of the ring,” Pacquiao said during a zoom presser on Wednesday, August 11 (Thursday, August 12, Philippine time).

“In the end, I want to win the belts. I’m so excited for this championship fight and I don’t care if I’m the challenger or champion coming into it. We’ll see who is the champion,” added Pacquiao, who got Ugas as replacement opponent after Errol Spence was forced to withdraw from their megabuck bout on Monday due to a retinal tear. 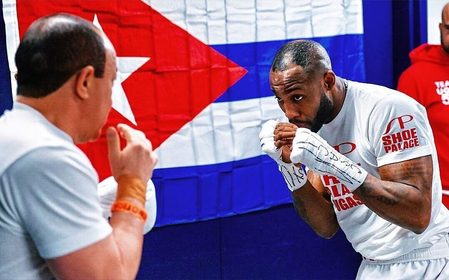 In a strange twist, the WBA stripped Pacquiao of the title he took from the then-unbeaten Keith Thurman in 2019 due to inactivity and rewarded it to Ugas in January.

Though he was relegated to champion in recess, Pacquiao remained the most bankable 147-pounder with all champions and challengers lining up to fight him.

Spence eventually got the chance to tangle with the eight-division world champion on August 21 at T-Mobile Arena in Las Vegas, Nevada.

Pacquiao-Spence was on the way to becoming the year’s biggest fight until the Texan sustained the eye injury and underwent laser surgery Wednesday.

Fortunately, Ugas was available as the Cuban was supposed to tangle with Fernando Maidana, who also got injured, in the undercard.

Pacquiao was just thankful his return fight after a two-year break due to the COVID-19 pandemic didn’t get canceled.

That he had prepared for a southpaw (Spence) in his training camp at Wild Card Boxing Club here hardly bothered Pacquiao.

“I always consider myself a bipartisan boxer. I am happy to fight either right-handed or southpaw fighters. It’s no problem for me at all to switch the styles I’m going to face.”

Furthermore, Spence and Ugas fight in the same manner.

“Both Spence and Ugas are aggressive fighters, which I like,” said Pacquiao.

Thrust into the biggest fight of his life, Ugas is determined to prove his true worth.

“I’m fighting for my legacy,” Ugas, who holds a 26-win, 4-loss record with 12 knockouts, said. “This is the most important fight of my life.

“I’m well aware that Pacquiao is the favorite. But at the same time, I’m a champion. I’ve faced so many strong opponents to get to where I am. I have full confidence in myself and my ability to get a victory.”

The most notable among Ugas’ opponents is Shawn Porter, who bested him by split decision in 2019.

Ugas must hold on to his belt tight for Pacquiao is coming to get it back. – Rappler.com