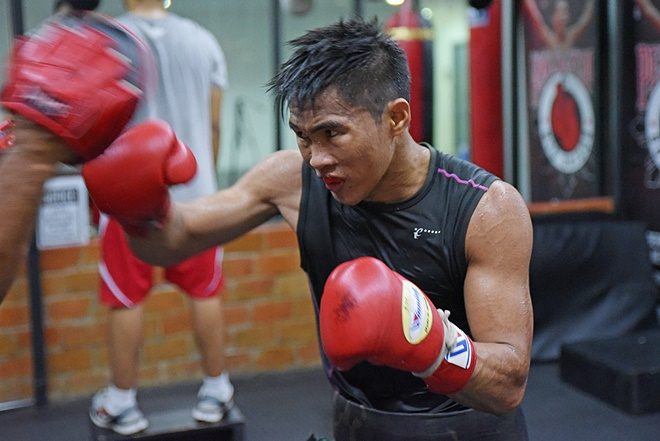 ALL SET. Pedro Taduran has been training in Bangar, La Union.

Though their fight for the International Boxing Federation crown is still 5 weeks away, Taduran already puts himself 90% ready.

“I’m in good condition. Right now, around 90%,” Taduran said in Filipino. “I have no problem with my weight as it’s steady at 112 pounds.”

Taduran has been working out at the Hardstone Monis Boxing Gym in Bangar, La Union, since October but hard training under former world champion Tacy Macalos started last month as soon as they got confirmation the fight for the 105-pound belt is on February 27 at the Lagao Gym in General Santos City.

“I jog every day then train in the gym in the afternoon,” said Taduran, who rests on Sundays. “Sparring is on Mondays, Wednesdays and Fridays.”

Taduran last fought on February 1, when he and Mexican Daniel Valladares battled to a technical draw in Guadalupe, Mexico, enabling the prized find from Libon, Albay to retain the crown he won over countryman Samuel Salva.

“This fight will be good to watch as we’re both aggressive,” said Taduran. “As far as power is concerned we’re just about even, but I believe I’m slightly faster.”

Like Taduran, Cuarto is also in deep training at the MP Boxing Gym in Davao under Nonoy Neri, one of Manny Pacquiao’s local trainers.

With travel restrictions still in effect owing to the coronavirus, Taduran said he and his team will fly to GenSan at least 15 days before the fight. – Rappler.com