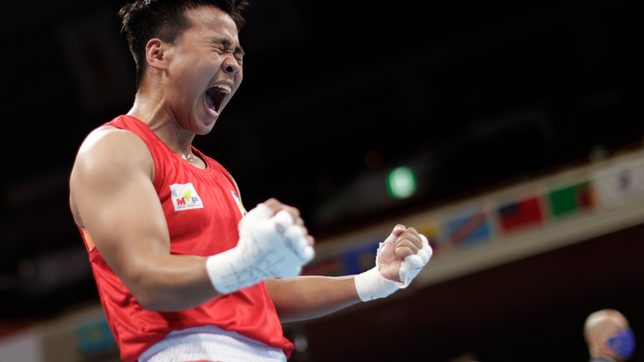 GOING FOR GOLD. Nesthy Petecio is one win away from bringing home the Philippines' second gold medal.

Another piece of history is waiting to be written for the Philippines.

Filipina boxer Nesthy Petecio delivered a 4-1 split decision win in the semifinals to put herself a win away from Philippine boxing’s maiden Olympic gold.

If she wins again, the Filipina will also become the first women’s featherweight Olympic gold medalist as the weight category made its debut in the Tokyo Games.

A loss in the final bout still assures Petecio of a silver.

Petecio will contest for the elusive gold medal on Tuesday, August 3, at 12:05 pm, Philippine time, where the Davao native has a chance to join Philippine weightlifting queen Hidilyn Diaz in bringing home the top prize.

In an arena that gave Petecio a home-crowd feel thanks to roaring cheers from teammates, officials, and Filipino journalists, Petecio grabbed the win, crying and falling to her knees as her name was announced.

“This means so much to me as not only is it my dream, it is my father’s dream,” said Petecio, whose father taught her how to box as a child.

“It’s not for me. It’s for my family, my country and for all the people from the Philippines who have prayed for me. I love you, I love you.”

It was a tight opening round that saw Petecio size up to the 5-foot-8 Testa, who is also the reigning European featherweight champion. But all five judges scored 10-9 in favor of the Italian, seeing her shots were a tad more effective.

But everyone saw a different Petecio in the second round as she clearly dominated with two big overhead right shots and landed a body shot in the last 10 seconds.

Going into the final round tied at 19-19, Petecio was on the attack as the bell rung and left no answers for Testa, who missed her shots to give the Filipino a clear advantage.

Testa lauded Petecio’s win, saying she was happy with her bronze medal – Italy’s first in the still-young Olympic discipline of women’s boxing.

In her quarterfinal win last Wednesday, Petecio became the first Filipino boxer to secure a podium finish in the Tokyo Games.

This is the first time in 89 years the Philippines will win multiple medals in the Olympics.