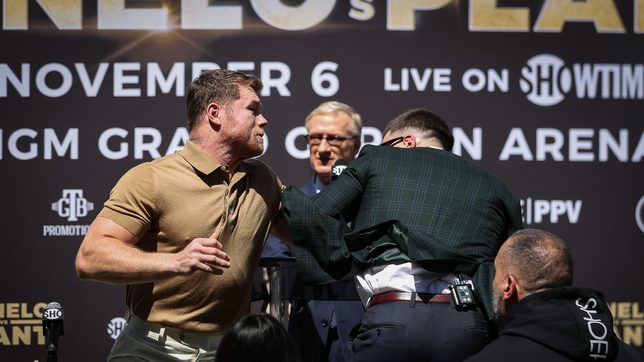 The undefeated Plant (21-0, 12 KOs) suffered a cut below his right eye after catching a swift palm strike from Alvarez (56-1-2, 38 KOs) in the midst of heated trash talk during the conference face-off.

Alvarez and Plant are set to fight for the unified super middleweight title on November 6 in Las Vegas.

If Alvarez is to be believed, Plant allegedly insulted his mother during their verbal sparring, which led to shoving and striking before both fighters were separated.

But Plant delivered a counterpunch on Twitter, and explained how he would never use such a tactic due to his own personal tragedy involving his mother.

“Truth is, he’s mad he’s got someone in front of him who isn’t scared of him, and isn’t just here to pick up a check, and his ego can’t handle it,” Plant tweeted.

“You’ll never hear me talk about someone’s mother, kids or wife. When men go off to war, they leave the women and children at home.”

Alvarez has yet to reply to Plant as of posting.

Regardless of what the truth might be, both fighters have a grand opportunity to air out their frustrations at the famed MGM Grand Arena in Las Vegas as Alvarez puts his WBC, WBA, and WBO super middleweight titles on the line against Plant’s undefeated streak.

Alvarez is also unbeaten in the last eight years, save for a 2017 draw to Gennady Golovkin, and last fell to 2021 Hall of Famer Floyd Mayweather Jr. back in 2013.