Facebook Twitter Copy URL
Copied
'As a boy, he would go to the city’s sanitary landfill in upper Barangay Carmen. That’s why I called him ‘Carlo Paalam, Pipi Lata,’ the tin can crusher, because that’s what he did to earn a living'

The road leading to Carlo Paalam’s Olympic dreams was fraught with nerve-wracking trials, heartbreaking setbacks, and near misses.

Despite winning the gold during the 30th SEA Games in Manila in 2019, Paalam, like now women’s boxing silver medalist Nesthy Petecio, nearly failed to hurdle the Olympic qualifying stage. That left the now bronze medalist Eumir Marcial (75 kg) and Irish Magno (52 kg) as the only two Filipino boxers to make it.

Initially, only Marcial and Magno qualified by normal procedures in the selection of the Olympic boxers through the international standards level. Magno and Marcial passed by fighting and hurdling the heavy odds in the star-studded Asia-Oceania Olympic Boxing Qualifiers.

But luck worked wonders for Paalam and Petecio as the Olympic boxing body filled the remaining slots in several weight categories based on world rankings as other continental qualifiers had been postponed due to the pandemic.

Petecio, being the second seed overall, and Paalam as the second in Asia, eventually qualified.

Now, the native of Talakag, Bukidnon, would climb the ring as the last Filipino boxer standing and the country’s last best hope to win a gold in Tokyo, Japan.

Looking back, it appeared indeed that luck played a big role in catapulting the Cagayan de Oro wonder boy to Olympic boxing’s gold-medal showdown on Saturday, August 7, at the Kokugikan Hall in Tokyo.

“Even Carlo could be wondering why he’s been slugging it out now in the world’s most grandiose and prestigious sporting arena,” said former two-time Olympian bantamweight fighter Roberto “Bobby” Jalnaiz who reached out to Rappler from his Long Beach, California apartment through a video call.

In 2013, he was among 50 young boxing hopefuls or so who were ejected from a three-story building, complete with a ring and other boxing amenities, provided by the Misamis Oriental provincial government. The building on Corrales Street in Cagayan de Oro served as their quarters. When their sponsor, now-Cagayan de Oro Mayor Oscar Moreno, stepped down as Misamis Oriental governor, priorities changed, naturally, and the boxers’ dormitory was shut down, displacing the boxers that included brothers Jason and Albert Pagara who subsequently turned pro under the ALA Boxing Promotions in Cebu City.

When Jalnaiz, the country’s lone gold-taker in the 1990 Asian Games in Beijing, China, sought greener pastures in the US, national coach Elmer Pamisa stepped in when Cagayan de Oro, now under Moreno, continued the amateur boxing development program started by the Misamis Oriental provincial government.

(As a boy, he would go to the city’s sanitary landfill in upper Barangay Carmen. That’s why I called him “Carlo Paalam, the tin can crusher” because that’s what he did to earn a living.) Jalnaiz said a Carmen resident, Felix Estremos, whose son was into boxing, brought the then-boy Paalam into the local boxing circle.

“He (Paalam) was noticeable – he was courageous and gutsy for his age,” he recalled.

Jalnaiz said Paalam was separated from Pamisa for a while when the coach was recalled by the national team for active duty in the Rio Olympics.

Losing motivation, Paalam was back in the streets again, living life in uncertainty. But a few years later, Pamisa returned to Cagayan de Oro and looked for his favorite ward, paving the way for a dramatic reunion, according to Jalnaiz.

“It was like a scene in MMK (Maalaala Mo Kaya) when Elmer found Carlo in the company of some juvenile delinquents at a makeshift basketball court in Carmen. From there on, they were inseparable, and Carlo turned into a very good fighter,” he said, amused.

Jalnaiz also described Paalam as “God-fearing and prayerful,” who shows this in the ring just like boxing icon Manny Pacquiao.

“That’s probably why he got lucky and managed to qualify in the Tokyo Olympics on last-minute notification,” he said.

Carlo Paalam and his one shot at Olympic glory 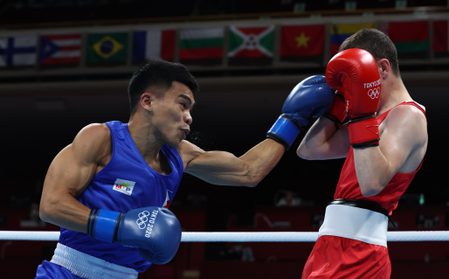 Now 55 and part of the Pacquiao Team in the US, Jalnaiz could only relish at the thought that the boy he christened “pipi lata” would go on to surpass his feat in boxing.

Jalnaiz said Pamisa and Paalam didn’t have to change anything in their game strategy in Tokyo.

“Carlo’s mobility, moving side by side with speed, and his crisp accurate blows would lead him to our first ever boxing gold in Olympics,” he said.

(If he follows what I told him to the letter, he’d get the gold.) – Rappler.com