Spence looks past Pacquiao, wants to fight Crawford next 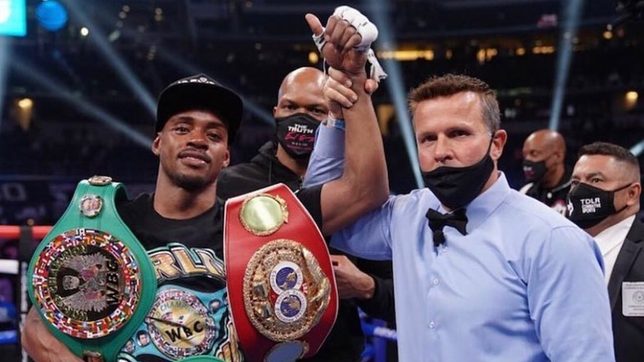 Errol Spence is highly confident going to his clash with Manny Pacquiao.

They won’t trade punches until August 21, but already Spence is talking of fighting fellow American and likewise unbeaten champion Terence Crawford next.

“Once I get that belt (Pacquiao’s World Boxing Association super welterweight title), like I told [PBC head] Al [Haymon], I want that fight with Crawford but if it doesn’t happen then I’ll probably just move up [to 154 pounds] or something,” Spence, the World Boxing Council and International Boxing Federation champion, told Barbershop Conversations.

“I’m not going to waste my time trying to fight somebody who says they don’t have any interest in me anymore. He doesn’t want to fight me anymore.”

After his legacy-defining collision with Pacquiao in Las Vegas, Nevada, Spence, the World Boxing Council and International Boxing Federation champion, thinks he has only Crawford, the World Boxing Organization titlist, left to tackle at welterweight.

“I most likely have two more fights at 147… I’m going to go across the street to [talk to Top Rank and] see what they’re talking about. If they are not talking about nothing, I’m moving up to 154… After the Pacman fight hopefully, we can make something happen [with Crawford].”

That is, if Spence emerges the winner over Pacquiao, the sport’s lone eight-division world champion whose skills are only slightly diminished at 42 years old.

Spence at 31 is in his prime and favored to beat Pacquiao, who at 5-foot-6 is giving away 4 inches in height and 5 inches in reach. Pacquiao will also enter the ring handicapped by a 25-month layoff since handing Keith Thurman a first defeat on July 20, 2019.

No wonder, Spence is boasting he’ll knock Pacquiao out and put the Fighting Senator into retirement.