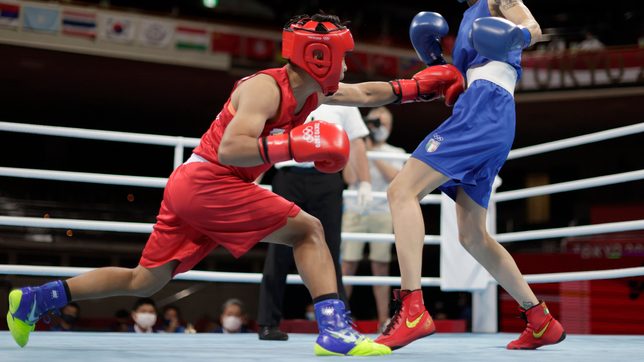 POWER. Although shorter than her foe, Nesthy Petecio makes the most of her speed and strength.

It didn’t come easy, though as Petecio’s passive stance and initial game plan had her trailing early against Italy’s Irma Testa in the women’s boxing featherweight semifinals of the Tokyo Games on Saturday, July 31.

(In the first round, I followed coach’s initial game plan not to initiate. We tried but it didn’t click because she really has a long reach.)

That plan had Petecio trailing 9-10 in the scorecards of all five judges. This forced her to change her tactic in the succeeding rounds, where she finally caught the Italian with several power shots to the head and body.

The quick adjustment sealed Petecio’s 4-1 victory over the 5-foot-8 Testa to advance to the final round.

(You saw that I was also surprised with her long reach. Then in the second round, coach said we can’t stick to our game plan, we need to be aggressive and bring her the fight.) The ploy worked as the Italian retreated against Petecio’s sustained aggression, which attacked Testa from all angles.

The Filipina wiped out Testa’s advantage in a flash with her own 10-9 score from all the judges, setting up the stage for a winner-takes-all round 3.

(In the succeeding rounds, I kept close, I really came in aggressive. I made use of my speed and strength because I knew I was stronger than her.)

Four judges saw the third in favor of Petecio (10-9), with only the fifth judge, Manuel Vilarino of Argentina, seeing otherwise.

The win matched the silver medal of light flyweight Mansueto “Onyok” Velasco in the 1996 Atlanta Games.

Petecio also has a chance to upgrade the silver to gold, a first for Philippine boxing, if she wins against Sena Irie of Japan on Tuesday, August 3.

“It means a lot to me because it (Olympics) is my father’s dream, and my dream also. This win is not only for me but also for my family, and to Filipinos, who prayed for me. I won this fight because I believed in God, I believed that He will help me,” said Petecio, turning serious and fighting to hold back her tears this time.

The Davao native also dedicated her win to her coaches and to close friend and fellow boxer Alexcel Dergantes, who passed away early this year.

(I’m so happy to reach the gold-medal round. This isn’t just for me, but also for the country, my best buddy Alexcel Dergantes who passed away, my family, and my coach. I know the fatigue the coaches have gone through ever since. I’ve seen their exhaustion. They don’t get noticed every time we win. But now, I want to offer this win to my coaches, to the Filipinos who prayed for me.) – Rappler.com