How to watch Pacquiao-Ugas fight in the Philippines Manny Pacquiao will try to get back what once was his as he tangles with World Boxing Association (WBA) super welterweight champion Yordenis Ugas on Saturday, August 21 (Sunday, August 22, Manila time).

Pacquiao won the WBA title with a win over erstwhile unbeaten American Keith Thurman in July 2019 and held it for over a year.

However, the WBA stripped Pacquiao of the belt in January due to his inactivity and handed it to Cuban Ugas.

On Sunday at the T-Mobile Arena in Las Vegas, Pacquiao returns to the ring for the first time in more than two years with the mission of dispatching Ugas and reclaiming his throne.

Here are ways to watch the Pacquiao-Ugas fight in the Philippines:

There will be a widespread free TV telecast of the Pacquiao-Ugas bout as the event will air on GMA, TV5, and CNN Philippines starting at 11 am.

All free-to-air broadcasts, though, will be delayed.

For those who want to watch live on television, there are a couple of options for cable subscribers.

Pay-per-view services are available for P750 for both SkyCable and Cignal.

Fans who opt to stream online can access the bout on Upstream PH, where the pay-per-view cost is cheaper at P400.

The Pacquiao-Ugas duel is also available on Tap Sports and its affiliate channels and websites. 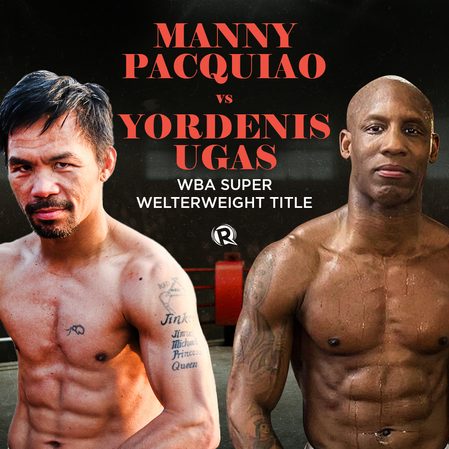 For those who can only listen in, tune in to GMA’s flagship AM radio station Super Radyo DZBB 594 and all Super Radyo stations nationwide for a live blow-by-blow coverage starting at 9 am. – Rappler.com