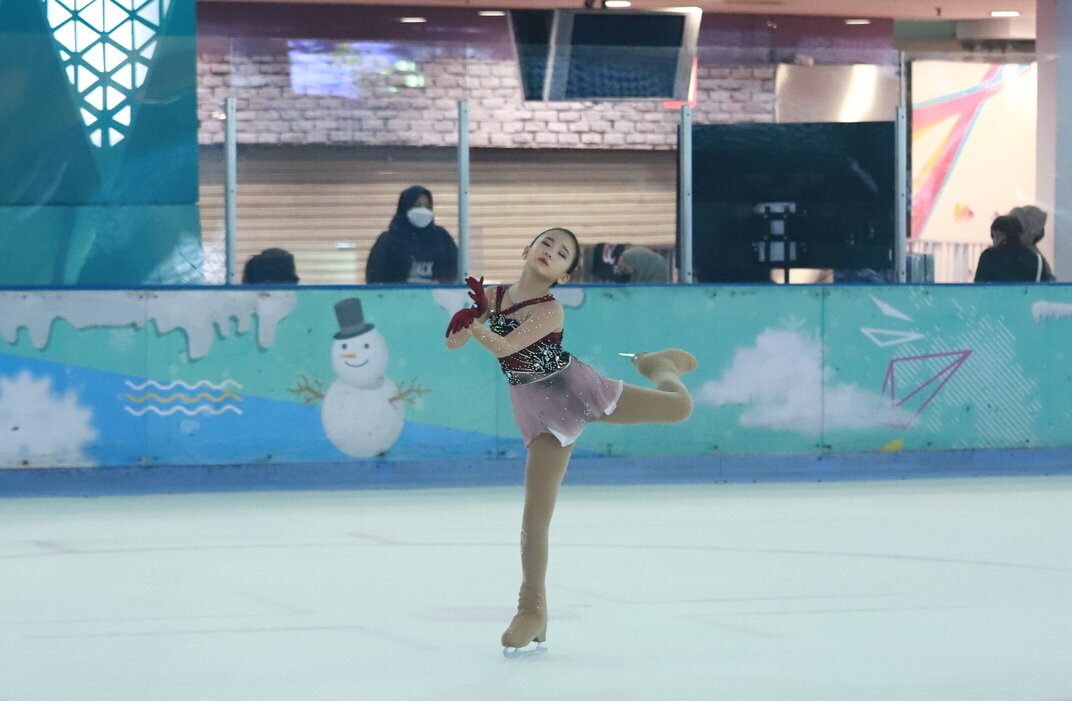 CEBU CITY, Philippines – Don’t let the adorable and sweet face fool you. This nine-year-old girl has a feisty attitude with grit to spare.

Meet Dawn Jasmine Gothong, a young figure skater from Mandaue City, Cebu who is proving to be a star in the making.

It was only four years ago when this young talented girl took up the sport. Fast forward to 2022, Dawn has already collected medals in local and international competitions.

Dawn was in her best elements in the recent SkateAsia Malaysia 2022 held at the Sunway Pyramid Ice Rink in Kuala Lumpur, Malaysia where she snatched five gold medals and one silver.

Adding to that massive harvest was Dawn’s silver in the 4-9 years old female open freestyle category.

For someone who just tried figure skating for the fun of it, Dawn, the youngest in the brood of three, has definitely come a long way.

Her mom, Jade, shared it was only by chance that her daughter got into figure skating.

“Back in February 2018, she was five years old then… it was like a trial for a weekend where you go out as a family. You try this one [activity] or this. We did it as a family,” Jade shared.

Jade was referring to a usual family weekend bonding that brought Jade and her two siblings, Dior Justine and David Chace, to SM Seaside at the South Road Properties in Cebu City.

The family tried the mall’s ice skating rink. The siblings loved the skating experience, and after a couple of weekends of visiting the facility, an offer for a formal training came.

“We were approached by a coach who asked if we were interested to have them enrolled not for competing but just to learn skating,” Jade said.

Two months after getting formal training, the Gothong siblings got their baptism of fire when Dawn and Dior Justine were invited to compete in a tournament in Japan.

“In June 2018, she (Dawn) competed in Japan. We all went as a family also. She came back not winning the gold. She only won two silvers but she wanted gold,” Jade said.

The three siblings went on to compete in more competitions and were consistent podium finishers.

Just as they started to make a name for themselves, Dior Justine and David Chace decided to quit the sport.

“They both stopped after June 2019. The reason being, they were back in school after summer break and it was getting harder for them to balance school and sports life as both entail a lot of daily hours,” Jade said.

“They had to make a decision to choose one, which was their studies.”

While her two siblings stopped, Dawn was undaunted and persevered.

“I want to continue. I want to win,” Jade recalled what Dawn told her after the competition in Japan.

“The turning point was the competition in Japan. It was where she saw other kids can do many other things. If others can do it, why can’t she?”

“She wanted to continue, she enrolled back with the coach… she was progressing fast,” Jade added.

Jade said 2019 was very challenging for Dawn after she took part in several tournaments.

Dawn didn’t disappoint in that hectic 2019 as she swept all the golds at stake in the 13 categories that she competed in that June tournament at SM Seaside.

“At the time, she was very young. She was elevating fast and she was in the higher level already,” said Jade.

Also in the same month, Dawn flew to Kuala Lumpur for another tournament.

“To test her, we joined an international competition in Kuala Lumpur. She won five golds and four silvers there,” shared Jade.

By competing in one tournament after another, Dawn’s arsenal was further sharpened and medals kept pouring in for her.

Dawn bagged four golds and two silvers when she competed in Jakarta, Indonesia in October 2019.

The only thing that stopped Dawn from harvesting victories was when the COVID-19 pandemic struck.

While there was no competition, Dawn stayed in shape by doing home exercises. She also trained in roller skating for 10 months and also cross trained by joining ballet.

It was during the pandemic when Dawn came to know top-notch skating coach Franklin Masayon, who went home to Cebu from Manila due to the health crisis.

Masayon offered online training and Dawn was quick to join.

As things started to return to normal, Masayon went back to Manila. Jade said they thought that was the end of Dawn’s career.

“If you’re leaving, that’s where we end,” Jade told the coach.

Still, Masayon convinced Jade to allow Dawn to continue with the sport.

It was also Masayon who encouraged Jade to bring Dawn to Manila to get much-needed exposure.

“Coach Masayon told me, ‘I wouldn’t waste my time if I didn’t see something in her (Dawn),’” said Jade.

Dawn is now a member of the Philippine national developmental pool. She will try to make it to the Philippine team when she competes in a qualifying tournament slated before the year ends.

With Dawn showing a lot of potential, Jade assured her daughter that the family will be behind her all the way.

“You may have the time and the money to spend, but if you don’t have the talent, it will be very hard,” Jade said.

Dawn flew to Manila last May and trained for two months before strutting her wares in the recent competition in Malaysia.

The young talent said her passion for the sport made her decide to continue even if her siblings opted to quit.

“Because I love the sport, I really like it. We can like compete and we can make new friends when we go to competition,” said Dawn, who looks up to Hayden Balucating as her idol.

She may still be very young but Dawn is is fully aware what it takes to win.

“I feel really happy that I get to win gold because I worked hard for it. I’m happy that the hard work paid off,” she said.

Aside from her victories, what makes Jade doubly proud of Dawn was the young skater’s ability to manage her time.

Jade said Dawn has done a good job juggling her studies and sport.

Dawn admitted being a student and an athlete at the same time is no easy task.

“It’s really hard. Every end of the quarter, the teacher gives me so many assignments so I have a hard time catching up,” Dawn said. “Sometimes in my free time, I just do it. When Im done with skating and it’s my rest time, I start answering it. During recess in school, I answer it.”

Jade said Dawn has also shown the ability to bounce back from adversities, recalling a competition in Malaysia in 2019 where Dawn was so frustrated after she failed to win a gold.

“She really cried. She’s used to winning gold. We felt it was a reality check,” Jade said.

“It was a good test, to experience that you were defeated. I was waiting for her to get back or surrender. I think that was the point that I said she really wants it because she decided to continue.”

Just like other athletes, Dawn has bigger goals that she wants to achieve. And that goal is to see action in the grandest stage, the Olympics.

“My dad, he really wants me to compete in the Olympics,” said Dawn.

Dawn vowed to work hard to achieve her Olympic dream. And if ever she gets to accomplish the goal, that will not be exclusively for personal glory.

“Though I don’t know yet, but then he says he wants it,” Dawn said. “I’ll just try to make him happy.” – Rappler.com