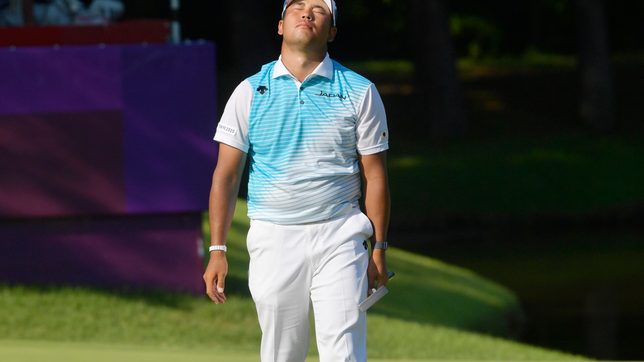 HIDEKI MATSUYAMA. Hideki Matsuyama of Japan at the Kasumigaseki Country Club on August 1, 2021.

Home favorite Hideki Matsuyama aired his frustrations on Sunday, August 1, after failing to bag Olympic bronze in a seven-man playoff at the Kasumigaseki Country Club, as he said the after-effects of COVID-19 had weighed on his short game.

The Japanese golfer’s preparations for Tokyo 2020 were disrupted last month when he tested positive for the virus and was forced into a 10-day quarantine.

He entered Sunday’s final round one shot behind American Xander Schauffele, who eventually won gold.

The Japanese made three birdies but he missed several chances to make more and said he was still struggling physically.

“I knew putting would not be good today… My physical situation was not good this time. I was feeling at ease but was nervous only on the greens,” Asia’s first Masters champion said.

“Even though there was no spectators, there were a lot of volunteers cheering me. I wanted to meet their expectations by winning a medal,” he told reporters.

Asked about his interest in competing in Paris in 2024, he admitted with a smile: “I am not eager very much. I hope (compatriot) Rikuya (Hoshino) will do that for me.” – Rappler.com