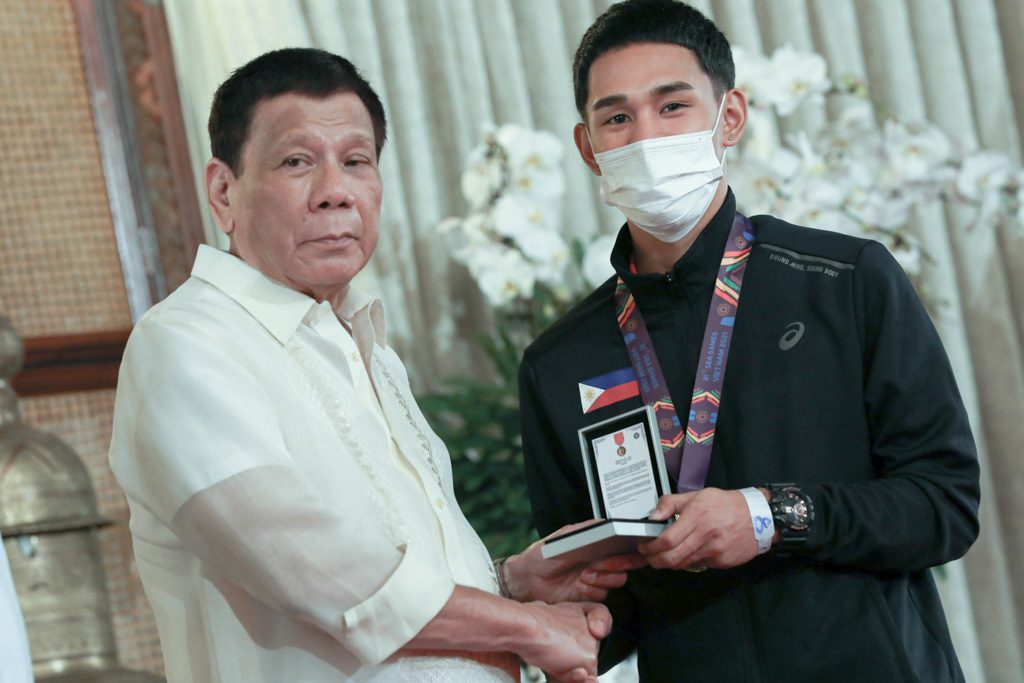 Facebook Twitter Copy URL
Copied
'I am very proud of you,' President Rodrigo Duterte tells Filipino athletes as the Philippines finishes fourth overall in the Southeast Asian Games in Vietnam

MANILA, Philippines – Satisfied with the Philippines’ performance in the Southeast Asian Games in Vietnam, President Rodrigo Duterte doubled the incentives of Filipino medalists in the biennial meet.

The country landed fourth overall in the 11-nation regional showpiece after capturing 52 golds, 70 silvers, and 105 bronzes for a total of 227 medals. (MEDAL TALLY: 31st SEA Games)

Excluding the Philippines’ 2005 and 2019 hosting of the SEA Games, it was the first time the country breached the 50-gold plateau since the 1993 edition.

“Please know that I really recognize all the tedious preparations you have made to perform your best in this regional sports competition,” Duterte said during a courtesy call at the Malacañang on Tuesday, May 31.

“Just like a father to every Filipino, I am very proud of you.”

Gymnastics star Carlos Yulo is the biggest winner as the law states that individual SEA Games gold medalists will receive P300,000, while silver and bronze winners will pocket P150,000 and P60,000, respectively.

Initially set to rake in nearly P1.7 million, Yulo will instead collect almost P3.4 million for finishing as the most bemedaled Filipino athlete in Vietnam with five golds and two silvers. Dancesport duo and real-life couple Sean Aranar and Ana Nualla will bag P900,000 apiece for their triple crown as teams with less than five members will divide the cash incentives for individual medalists equally.

The Philippine Olympic Committee will grant cash bonuses to Filipino medalists in Vietnam as well.

“All medalists will be given a cash bonus within the week – after the POC has computed and audited how much sponsorships we received from major corporations,” said POC president Bambol Tolentino on Monday.

The Kamagi Medal is given to individuals who actively participated in and contributed to a campaign or advocacy of the president. – Rappler.com