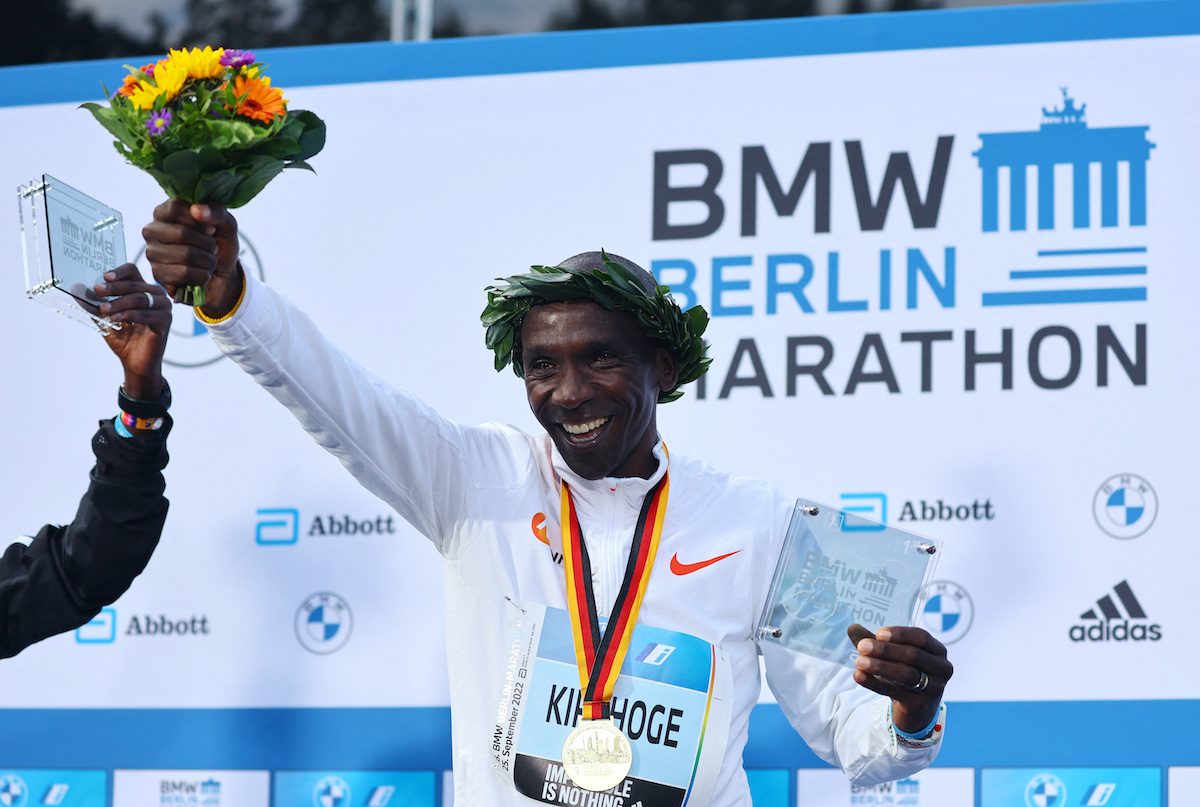 UNDISPUTED. Eliud Kipchoge continues to cement his status as the greatest ever marathon runner.

Facebook Twitter Copy URL
Copied
In a class of his own, Kenya's Eliud Kipchoge breaks his own world record in the Berlin Marathon by half a minute

BERLIN, Germany – Kenya’s Eliud Kipchoge shattered his own marathon world record on Sunday, September 25, winning the Berlin race with a time of 2:01.09 to shave half a minute off his previous world best set in the German capital four years ago.

The 37-year-old, who has now won 15 of his 17 career marathons, including two Olympic triumphs and 10 major titles, was in a class of his own, setting a blistering pace along the flat inner-city course on an overcast day to cement his status as the greatest ever marathon runner.

“I am happy with my preparation and I think I was so fast because of the teamwork,” Kipchoge said. “Everything is down to teamwork.”

“I planned to go out fast in the first half. I thought try to run fast. It was a marvellous performance. My legs and my body still feel young. But the most important thing is my mind and that also feels fresh and young. I am so happy to break the world record.”

Only a handful of runners could keep up with his sub-three minute kilometer split times in the early stages, along with the group of pacemakers.

He gradually shook off last year’s winner Guye Adola but fellow Ethiopian Andamlak Belihu refused to buckle, even as they raced through the halfway mark in under an hour.

Belihu finally dropped back around the 27 kilometer-mark as Kipchoge pushed on for the record.

The Kenyan, who retained his Olympic title at the Tokyo Games last year, had fallen short of his world mark by just over a minute at the Tokyo Marathon in March, but he was not to be denied in Berlin.

Having slowed slightly in the second half of the race he still powered through the final 500-meter sprint.

Passing through the city’s iconic Brandenburg Gate just as the sun started to emerge, a beaming Kipchoge crossed the finish line to set another record.

Kipchoge is the only man to run a sub-two hour marathon when he clocked 1:59.40 on a specially designed track in Vienna in 2019 but the time is not officially recognized as it was not set in competition.

Asked whether he would attempt a sub-two hour run in Berlin next year, Kipchoge said: “Let us plan for another day. I need to celebrate this record and have to realize what happens. Just roll and see what happens.”

“There is still more in my legs. I hope the future is still great. My mind is still moving, the body still absorbing the training.”

Ethiopian Tigist Assefa stunned the field in the women’s race, winning in 2:15:37, the third-fastest time in history. Only record holder Brigid Kosgei of Kenya and Briton Paula Radcliffe have run faster marathons.