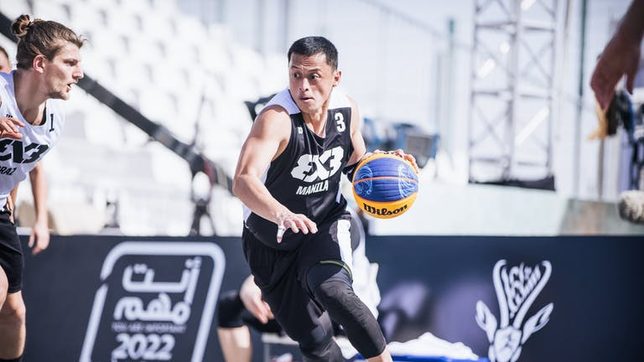 CLUTCH. Chico Lanete and Manila Chooks pull off an upset over the host squad.

Veteran Chico Lanete reintroduced Manila Chooks to the world as his game-winning two-pointer downed Doha, 21-20, in the qualifying draw of the 2021 FIBA 3×3 World Tour Doha Masters in Qatar on Friday, March 26.

However, Manila’s win was not enough to push Graz out of contention as the Austrians swept the qualifying round with a 22-17 win over Chooks, and a 21-5 decimation of Doha.

Graz moves on to the main Masters bracket to face American teams NY Harlem and Princeton, the world’s 4th and 5th-ranked teams, respectively.

Despite the early exit, the underdog Manila side can go back home with heads held high following their stunning win over the Doha home team.

Former PBA player Mac Tallo, meanwhile, added 4 points, and sowed the seeds for the heroic finish with a game-tying bucket, 19-all, with 6 seconds left.

Doha still had a game-winning chance in the end, but Souley Ndour’s hook shot was just a tad too strong as regulation time expired.

Manila finishes as the 13th seed in the 14-team field.– Rappler.com