MANILA, Philippines – The Turkish national team did not hide its disappointed over a 77-69 defeat at the hands of Canada to open the 2016 FIBA Olympic Qualifying Tournament Tuesday, July 5 at the Mall of Asia Arena in Pasay.

“Really bad. Usually we move the offense. But they missed shots, open penetrations,” Ataman said in the post-game press conference.

Turkey, ranked 8th in the world, shot just 36% total from the field and also missed 20 shots from long range. But of all the bricks, what hurt most was their horrible 19-of-34 free throw shooting.

“Mainly I think we did not play good on the offensive side of the game. Now, looking at the scores of each period, we played good defense but offensively we couldn’t capitalize on our strengths, especially missing 15 free throws was a big time disadvantage for us.”

(IN PHOTOS: Canada holds off Turkey in Manila OQT opener)

Turkey also had just 11 assists against Canada’s 17, and they suffered under a slow pace and tight spacing. Down by double digits in the second half, Turkey switched it up and sat down big man Omer Asik to quicken the pace. It resulted in a run to cut the deficit but ultimately was not enough against Canada led by the hot hands of captain Cory Joseph, who had a game-high 21 points.

“All game we used 61 possessions but only 22 times we get successful to score. That’s too low percentage for us,” coach Ataman said. “We got successful to make it a 6-point game but we weren’t successful to win the game.”

Ataman likewise emphasized the bad shooting of naturalized point guard Bobby Dixon, whose Turkish name is Ali Muhammed, as he missed all 8 of his attempts from the field in over 20 minutes of play. His plus/minus was -7.

“I’ve known Bobby Dixon for the past four, five years in Turkey and I think this is the worst game of his career and I don’t think he will repeat this game,” the coach said.

Asik, who plays for the New Orleans Pelicans in the NBA, finished with just 4 points with only one field goal attempt along with 6 rebounds. He played 10 minutes off the bench and was -13 on the floor.

Ataman also called out forward Samet Geyik who went 1-of-7 from the field for just 4 points.

“We played very bad offense. We couldn’t find our offense, Some of our key players had a bad game for us.”

The tough loss was compounded by an injury to starting swingman Cedi Osman. The 6-foot-7 Osman went down on a play in the final frame clutching his leg and did not return to the game.

Ataman said Osman may miss the rest of the short tournament. 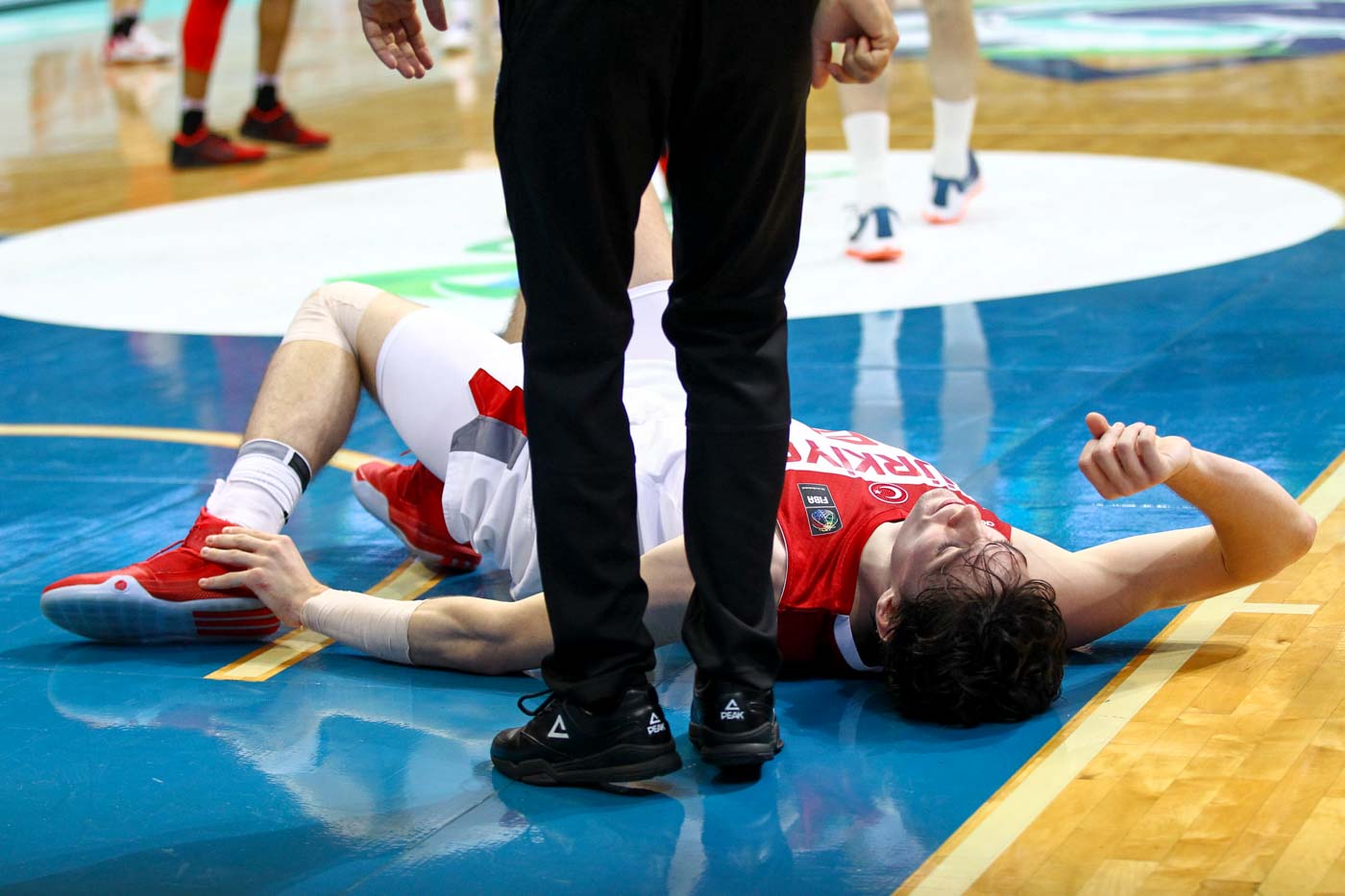 INJURED. Swingman Cedi Osman of Turkey is down on the floor against Canada.

“I think he’s not good. Of course now we know in the first 24 hours it’s difficult to undersand what happened. But I think our doctors will send him to the hospital to get an MRI,” he said after the game. “But what the doctor told me is that he can’t play against Senegal. It’s unlucky for us because he was our best player in this bad game.”

“I don’t think it’s a shin. Also, it’s not knee but something in his leg. Maybe with this injury, you can’t play for two or 3 weeks but we will see,” he added.

Turkey will next play Senegal in a must-win game on Thursday, July 7 to boost their chances of advancing to the next round. The winner of the tournament will qualify for the Rio Olympics in August. – Rappler.com