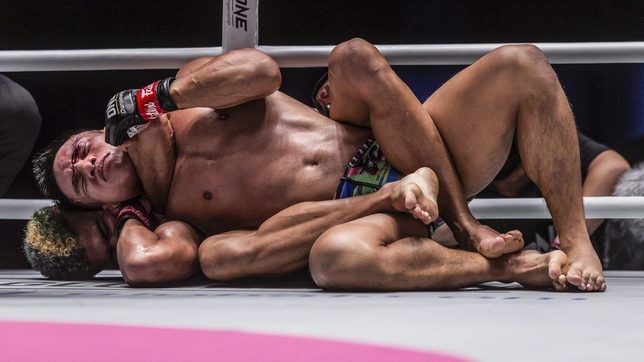 ONE Championship returns inside the ring after a five-month hiatus, but Mark ‘Tyson’ Abelardo still could not find his way back to the winning track.

Abelardo (19-8) ended up on the other side of a submission as he fell short against his Brazilian foe Fabricio ‘Wonder Boy’ Andrade (4-2) in the closed-door ONE Championship: No Surrender event on Friday, July 31 in Bangkok, Thailand.

The Filipino-Kiwi showed aggressiveness in the opening minute of the fight before Andrade imposed his reach and height advantage and seized control with his clean right jabs.

Abelardo then decided to shake things up and tried to take the fight to the ground in the second round with a single leg takedown. But Andrade ended up at the back of Abelardo and sneaked in a rear-naked choke that left the Filipino unconscious.

With his loss, Abelardo now dropped 3 of his last 4 fights, including a decision loss against Troy Worthen in 2019.

For the action-packed main event, Rodtang ‘The Iron Man’ Jitmuangnon (263-42-10) took a majority decision victory over Petchdam ‘The Baby Shark’ Petchyindee Academy (95-16-7) to defend his ONE Flyweight Muay Thai championship.

After a slow opening round, Rodtang quickly turned up the pace and did not give Petchdam a single second to catch up. Rodtang bombarded his challenger with heavy punches until the last minute of the fight.

Meanwhile in the co-main event, Petchmorakot Petchyindee Academy (161-35-2) successfully retained his ONE Featherweight Muay Thai title as he scored a majority decision victory against ‘The Boxing Computer’ Yodsanklai IWE Fairtex (202-74-4).