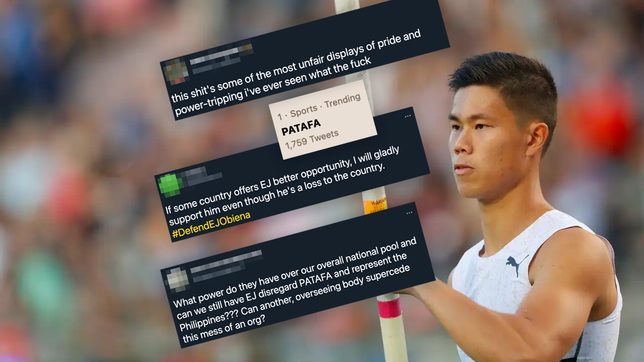 Is this how we treat our national athletes?

Social media users were quick to react with anger and swift condemnation over the Philippine Athletics Track and Field Association’s (PATAFA) decision to expel pole vault star EJ Obiena from the national team.

The expulsion comes after their investigation into alleged misappropriation of funds and discrepancies of payments to his coach Vitaly Petrov and falsified liquidation documents in the last three years.

PATAFA also plans to file a criminal complaint against Obiena for estafa over coaching fees worth €6,000 or P360,000 from May to August 2018.

PATAFA chairman and Representative Rufus Rodriguez said the statements Obiena and his camp released to the media and the public hearings were not taken into consideration as the pole vaulter failed to appear before the investigative committee three times.

Obiena currently ranks No. 6 in the world and holds the Asian pole vault record. In the Tokyo Olympics, he was also the only Asian to reach the final round, where he finished 11th.

Following the decision, PATAFA and Obiena were among the top 5 trending topics on Twitter.

Some netizens said the decision was an “unfair display of pride and power-tripping” and was meant to feed the ego of PATAFA leaders such as their president Philip Ella Juico.

They also called for the election of a new PATAFA president to replace Juico.

Twitter user Nate Gonzales likened Obiena’s situation to how the government is treating its frontliners and students.

Other netizens also saw how the decision could lead Obiena to change citizenship to be able to properly compete internationally such as chess prodigy Wesley So and 2021 US Women’s Open champion Yuka Saso, with some supporting such move.

In a bid to defend Obiena’s right to represent the Philippines in the international sporting field, users have also called for a change in leadership in handling the country’s track and field athletes by abolishing PATAFA.

Here’s how other netizens reacted to PATAFA’s decision: