A closer look at S+A's plunge into European club football

MANILA, Philippines – The Pinoy football firmament is exploding with the news that the English Premier League, Spain's La Liga, and the UEFA Champions League will now be carried on ABS-CBN S+A, a free channel. Previously these properties were only available on BeIN Sports, a trio of HD sports channel that shows mostly football, and is available on Sky Cable for P500 a month.

Now anyone with a TV or ABS-CBN TV Plus can enjoy the best club football on the planet, live. A schedule of 17 top European club matches starting Friday, December 1 was released on Thursday, including Arsenal versus Man Utd on December 3, Bayern Munich vs Paris Saint Germain 3 days later, and two colossal derbies on December 23, Real Madrid vs Barcelona, and Arsenal against Liverpool. All but one of the matches, Spurs vs Stoke on Saturday, December 9, is being shown live. This will go on until the UEFA Champions League final in the middle of 2018. See the schedule here.

There are plenty of questions that Pinoy football fans seem to have about this development, and we will try to address them here.

Who is bringing this to the Philippines and why?

It appears that Bernard Sumayao is a prime mover in this sudden shift to the Beautiful Game. Sumayao is a Filipino media professional from La Salle who has been living in Thailand for over 30 years. He chairs a company called Triple CH Holdings and has been connected with an outfit called Media Resource Management Co. Ltd.

A big chunk of his work has apparently been involved in football.

In Thursday's press conference he said he had been handling the English Premier League and its broadcasting and sponsorship in the kingdom for the last 14 years. Sumayao says he has also helped grow Thailand's thriving domestic league.

“14 years ago we were in a stadium with 200 fans,' recounted Sumayao. “Now the league us worth 12 Billion baht and the teams are worth 1 billion baht each, or about US$30 million.”

“My dream is to make football closer in popularity to basketball,” he declared. Later on he said “I came back here because I am a man on a mission.”

“This will be a renaissance of football,” he continued. “This is just our first step. Expect more from us in the coming months.”

Sumayao and ABS-CBN Integrated Sports head Dino Laurena candidly confessed that the content is being given to the broadcasting giant for free.

“This is like a gift, it's not a major investment for us,” said Laurena,” who also said “we need to make a larger commitment to football so that it's not a niche sport. That's essential to its viability.”

“This is not just for business, it's personal,” said Sumayao. 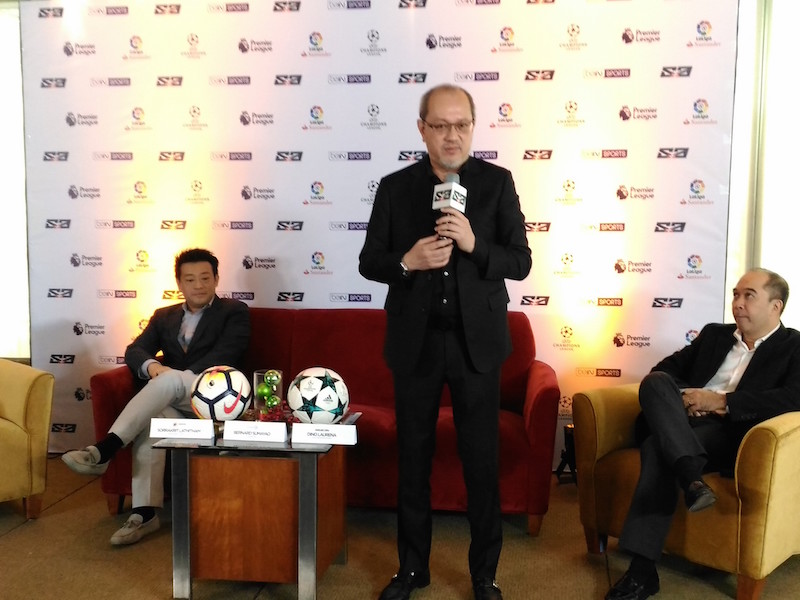 AMBITION. Sumayao flanked by Lathitham on the left and Laurena on the right.

What else is being planned?

Apart from the matches, Sumayao says there will be magazine shows, highlight shows, and viewing events in public places. He also said that the “localization” of the broadcast to tailor the Philippine market is something they must do down the line. This has been crucial in Thailand, where the Premier League is popular but few fans speak English.

“We need activations. We have lots of future plans going forward,” added Sumayao.

Sumayao says the broadcast is just an “appetizer.” There will be plenty else going on outside of the TV screen. Sumayao also wants to boost grassroots football here by supporting high school and collegiate football.

According to Sumayao 3 academies of prominent English clubs are looking to bring their expertise in developing young footballers to the Philippines. He named one, Leicester City. The unheralded Foxes were the shock champs of the Premiership in the 2015-2016 season. They are owned by a Thai travel retail company, the King Power International Group, and the club chairman is Thai magnate Vichai Srivaddhanaprabha.

So should I cut my BeIN Sports subscription?

Personally, I would not. It seems that BeIN is giving ABS-CBN the free-to-air rights but is keeping the cable rights. S+A will only air these matches on their SD channel, not on their HD channel.

I am terribly spoiled by HD. For me it's the only way to watch sports, or really anything. I almost cannot bear to watch football on SD anymore and I gather many of you feel the same.

We were also told on Thursday, November 23, that there will be no replays of matches on S+A. BeIN typically airs Champions League live on an ungodly hour, then replays the matches during the day, often first thing in the morning. With BeIN you can wake up, news blackout yourself by staying away from social media, and watch your favorite Champions League team play as if it was a live match.

BeIN also has more matches and more leagues. The Qatar-based channel also shows France's Ligue 1, and the UEFA Europa League, the international club competition that sits below the Champions League. There is also Major League Soccer, the Argentinian League, and now, Australia's Hyundai A-League. You also get the Turkish League now, if you must not miss those fiesty Galatasaray vs Fenerbahce derbies. There are also plenty of excellent magazine shows like the FIFA Football Show, plus preview and highlights show.

(In case you're wondering, the German Bundesliga, Dutch Eredivisie, and top Asian leagues like the AFC Cup and AFC Champions League are aired on Fox Sports.)

BeIN is a football junkie's Nirvana that has devastated my already limited social life for the past three or four years. Things won't be changing soon.

But if you don't have access to cable, or cannot or will not fork over the 500 bucks a month for BeIN, then what S+A is offering is a godsend. It's more than enough world-class football for most.

But what about the local league, the Philippines Football League? And the Azkals?

There was no announcement of any partnership between ABS-CBN and the PFL nor the national team. But conspicuously present at the press conference in ABS CBN's ELJ building were PFF General Secretary Edwin Gastanes, PFL CEO Lazarus Xavier, and Azkals manager Dan Palami. All were welcomed to the stage for the picture-taking that concluded the press con along with Sumayao and Sorrakrit Lathitham of the Demeter Corporation.

It is also noteworthy to mention that ABS-CBN broadcasted the Azkals last AFC Asian Cup qualifier against Nepal.

The Philippines Football League currently does not have a broadcast partner and distributes its matches via livestreaming.

Interesting set of facts. It's as if a giant neon hashtag #areyouthinkingwhatimthinking was floating around the room.

How does all of this come together?

This new broadcast deal is one piece in an interesting puzzle. Let's review.

The best European leagues will now viewable by millions, nay, tens of millions of Filipinos on free TV from now until June. That could spur interest in the game.

From February to May, UAAP football will be aired on S+A as well. That will help. February is also likely the beginning of the second season of the PFL. At around that time we will have one, maybe two Filipino teams in the AFC Cup.

In late March, the Azkals, with a win or draw against Tajikistan OR a draw or Nepal win in the other match, qualify for the AFC Asian Cup final stage for the first time.

In April our Women's national team will participate in the final stage of the AFC Asian Cup for women.

In mid-June the FIFA World Cup will be played in Russia. S+A will air every match live. The Philippines, like the rest of the world, will catch World Cup fever like any other nation.

2018 is also a Suzuki Cup year, and there is talk of a reformatted competition being played during FIFA dates. That in theory means a stronger Philippine team that could go deep.

On January 5, 2019 the AFC Asian Cup final stage will begin in the UAE, hopefully we will be there.

Later on in 2019 the Philippines hosts the SEA Games, and our U22 (or U23, I hear they are still discussing the cut-off year), national team will have a big home field advantage. Might we get a first-ever SEA Games medal in men's football?

“My dream is to see a Thailand-Philippines SEA Games gold medal match in 2019,” says Sumayao.

Are the planets aligning for another Philippine football revolution? Perhaps. Lets hope all the pieces fall into place for the good of the game.

Meanwhile, starting next month, get ready to spend more time in that sofa. Some pretty awesome football is coming your way.