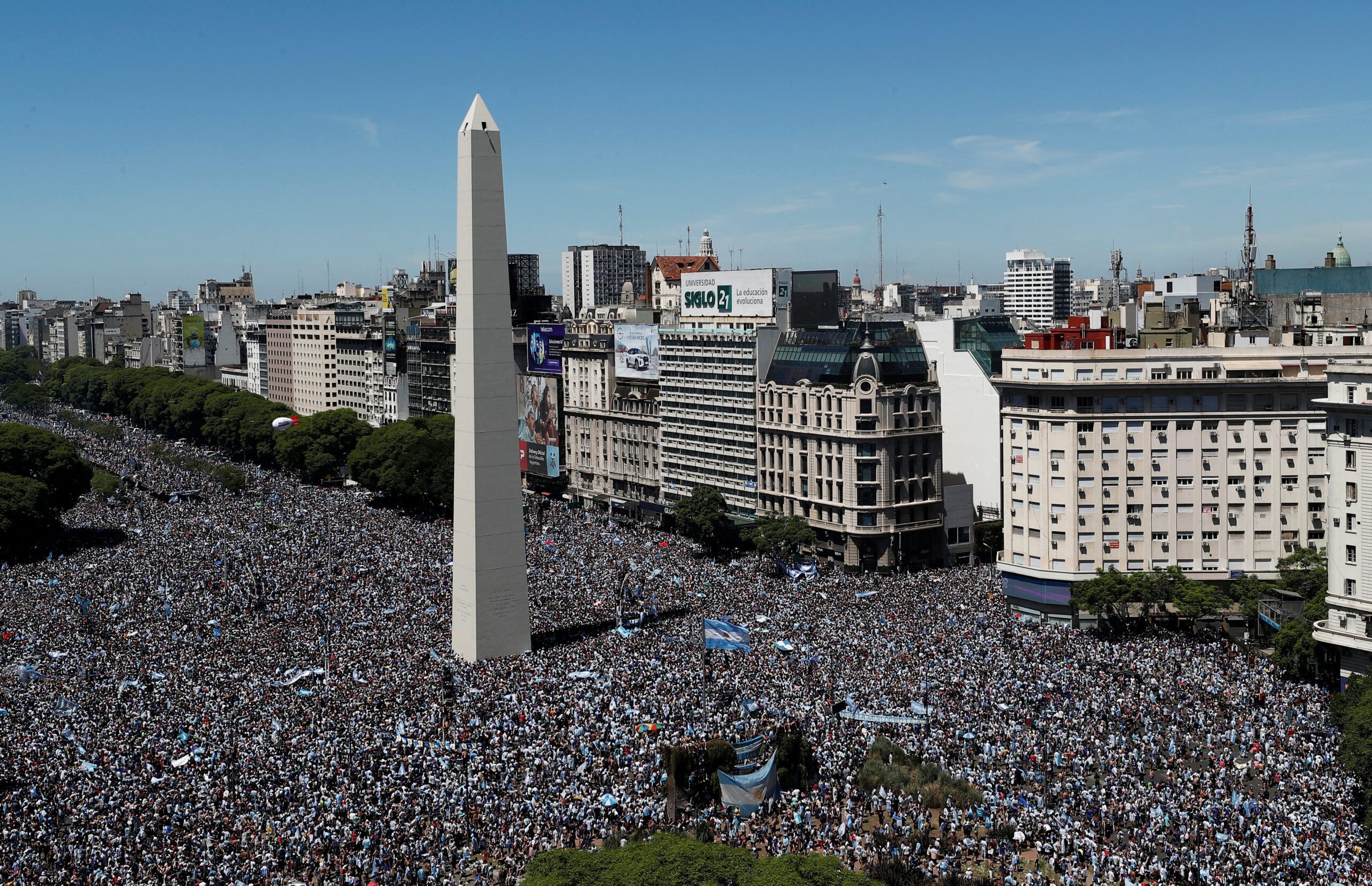 OVERFLOW. General view of the Obelisco as Argentina fans are seen ahead of the victory parade

Argentina’s World Cup heroes had to abandon an open-top bus parade in Buenos Aires on Tuesday (Wednesday, December 21, Manila time) as millions of ecstatic fans flooded onto the streets and brought the city to a standstill, with Lionel Messi and his team mates whisked into helicopters to complete the celebrations.

The players who were triumphant in Sunday’s World Cup final in Qatar were unable to reach the central Obelisco monument as planned because the route was completely blocked by the heaving crowd, estimated by local media at over four million people.

With social media footage showing some fans trying to jump onto the team’s bus when it passed under a bridge, the scheduled eight-hour journey was cut short due to security fears. The players were transferred from their parade bus and into helicopters.

“The world champions are flying over the entire route in helicopters because it became impossible to continue on land due to the explosion of joy,” presidential spokeswoman Gabriela Cerruti wrote on Twitter.

Television images showed people all over the city, including those waiting around the Obelisco and on surrounding highways trying to catch a glimpse of their returning champions.

“It’s crazy, it’s incredible, it’s the best thing that can happen to you in life,” said 25-year-old metalworker Matias Gomez.

“It is an enormous joy to see all these happy people, all together, one with the other, holding hands, giving each other hugs, kisses. We are all one today.”

The team had arrived in the early hours of Tuesday at Ezeiza airport. Despite it being around 3 am local time, thousands were waiting with banners, flags and flares and howling with joy after Messi and his team mates ended the country’s 36-year wait to win the World Cup.

By around midday millions had already congregated in downtown Buenos Aires, with major roads shut down for the parade. People held up banners of Messi and late icon Diego Maradona, played instruments or climbed lamp-posts or bus stops.

Roads started to clear after the players took to the sky in helicopters, with some people left disappointed not to see the team.

The Argentine capital has been in party mode since the dramatic victory over France in the final in Qatar, which has helped mask economic woes in the South American nation battling one of the world’s highest inflation rates.

The penalty shootout victory made the country world champions for the first time since Maradona hoisted the trophy in 1986 and the third in total.

The government made Tuesday a national holiday to allow fans to celebrate the win.

“I celebrate how the people took to the streets to pay homage to our national team,” President Alberto Fernandez said in a post on Twitter. “Millions of Argentines in the streets, in a uncommon December, which will remain forever in our hearts.”

As the open-top bus snaked through the city, players danced and cheered with fans who circled the bus. Police were having to hold people back to allow the vehicle to move forward on its slow journey towards the centre of town.

But eventually they could go no further.

“They don’t let us get to greet all the people who were at the Obelisco. The security agents that escorted us won’t allow us to move forward,” tweeted Chiqui Tapia, president of the Argentine Football Association (AFA).

“A thousand apologies on behalf of all the champion players,” he added. “Thanks for so much love!! We are the top football nation in the world! The cup is back home.”

Messi, 35, has burnished his reputation as one of the world’s greatest ever with the win as Argentina beat France 4-2 on penalties after a scintillating 3-3 draw after extra time.

He has said it was his last match in the World Cup, though he plans to play a few more games for the national side.

At times it has felt that the whole country has been partying through the night from Sunday onwards in the southern hemisphere summer, the joy of victory infecting everyone with cars regularly blaring their horns in celebration.

“There are people lying on the floor who came straight from the last party to get up and keep partying,” said Elio Maisares, 25, as he celebrated in the city where everyone and everything was covered in the white-and-blue of the “Albiceleste”.

“Just look at all this, look at everything that is painted in light blue and white. Along the roads, the highways, all the people are rooting for Argentina,” he said.

“It’s really impressive, it’s unique, what a way to cry. I cried this morning, yesterday, the day before yesterday, I can’t cry anymore, it’s incredible!” – Rappler.com