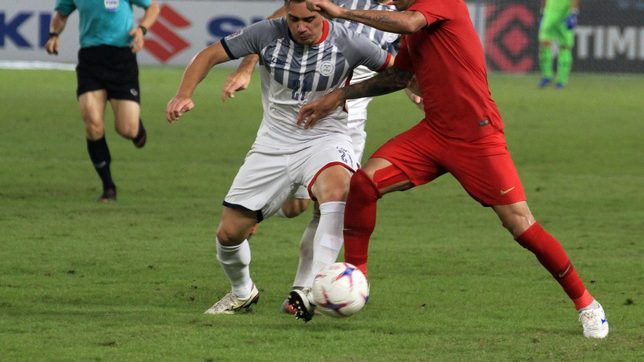 CHALLENGE. The Philippine Azkals will be up against Southeast Asian powerhouses in the AFF Suzuki Cup.

MANILA, Philippines – The Philippine Azkals’ dream of raising the AFF Suzuki Cup trophy burns brighter as they are more determined to make the most out of their Christmas sacrifices.

The 2021 edition of the regional football tournament will run for the whole month of December, which coincides with the Philippine’s festive holiday season. But head coach Scott Cooper instead encourages the team to give the country an “extra Christmas present” with more victories.

“If you’re going to be away from them at that time, then make it count is what I say and so let’s try and give everybody an extra Christmas present and enjoy ourselves,” said Cooper, who also admitted that Christmas is a special time for him.

National team mainstay Martin Steuble shared he was able to spend some time with his family before leaving for the Suzuki Cup, so football is his focus this season.

“The focus is on football and on the Azkals, so we’ll celebrate Christmas next year and in the following year for sure,” said Steuble in a press conference hosted by Tap DMV.

Bienvenido Marañon, who will be making his debut for the Philippine Azkals, added that if they get a chance to stay until the end of the tournament on January 1, 2022, it signifies that they have done well.

“I would like it to be until January 1 [because] that means that we did something great. And my family also supports me in this,” said United City FC striker Marañon.

The Azkals will need all the motivation they can get as this has been their “most difficult” campaign yet in terms of preparations. Many of the national team mainstays encountered club release issues and were sidelined due to injury.

But this also gives more opportunities for the new breed of Azkals to represent the country in the most prestigious Southeast Asian football tournament.

Oliver Bias, Justin Baas, Dennis Chung, Oskari Kekkonen, Sandro Reyes, Christian Rontini, and goalkeeper Quincy Kameraad were included in the senior team after suiting up for the flag in the AFC Under-23 Asian Cup qualifiers.

“I’ve spoken about the sacrifice for the players to make it here, but for us players, it’s a huge honor to be called up to play for the Filipino team,” said Steuble.

“Now, as the pool of players gets bigger and bigger, stronger and stronger, there are more players for Scott and the coaching staff to choose from.”

The Azkals will kick off their Suzuki Cup campaign against host team Singapore on December 8, 8:30 pm. – Rappler.com