MANILA, Philippines - Biñan, Laguna is well-known as a center for manufacturing, boasting two world-class industrial parks. But the city of about 300,000 inhabitants could very well be the center for football in the region as well.

The newest artificial grass football field in the country has just been completed in Barangay Zapote, Biñan, a stone's throw away from the Biñan City Hall. The facility, which has yet to be given an official name, is believed to be the thirteenth synthetic pitch in and around Metro Manila, after installations in Rizal Memorial, International School Manila, the British School, Turf BGC, The Camp, Sparta, Chelsea-Gatorade Blue Pitch, King's School, FEU Diliman, Emperador Stadium, and De La Salle-Zobel. The Valdes family also has a small pitch in their family compound in San Juan.

The field, which will have an athletics track laid around it soon, measures 66 meters wide and 102 meters long, slightly less than FIFA's preferred size of 68 meters by 105 meters, but still very common and acceptable.

E-Sports, headed by Audris Romualdez, installed the turf, which is Diamond 50, a premium product of the Italian turf company Limonta. As the name suggests, the two-toned monofilament blades of grass are fifty millimeters long. The backing of the Italian-made latex turf carpet is coated in polyurethane, which, according to Romualdez, prevents the grass from easily being torn away. In other installations, the backing is just latex.

The rubber infill granules are imported from Spain. The surface feels quite soft and natural to the feet. There is a drainage system for the field underneath.

The field recently passed the FIFA 2 star test conducted by Kiwa ISA Sport B.V., a Dutch FIFA-accredited testing institute. According to Kiwa ISA's Anthony Apparailly, all Biñan is waiting for is the certificate from FIFA, which should be forthcoming.

The aluminum goal frames are from AFN Sports, a Malaysian brand that uses German technology. 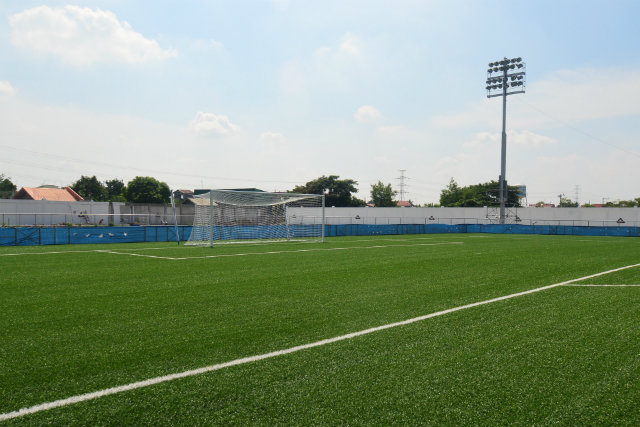 A light tower rises over the pitch.

Lighting is provided by American specialist Musco, from Iowa. The five lighting towers are said to be able to provide 1400 lux of light, more than the widely-accepted 1200 lux minimum. According to E-Sports' Yo Casal, the lighting is “constant,” meaning the illumination will not deteriorate over time.

A grandstand is being built beside the pitch that will seat up to 2500 spectators under a canopy that thankfully has no vertical pillars that could block anyone's view. There will be four dressing rooms, so in the event of a double-header, all four teams can enjoy some privacy. Inside the grandstand there are plans to put up a boxing ring. A closed-off VIP section will be in the upper center of the grandstand and a stage below.

Project Manager Francis Zamora, who happens to be a footballer himself from Jaro, Iloilo, expects the grandstand to be completed sometime within the next few months.

The grandstand will sit just four and a half meters away from the track, which means spectators will be close to the action. It is also understood that temporary bleacher seating could be a possibility in the future.

In one corner of the field opposite the grandstand there will be a twelve-by-nine meter screen that will serve as a scoreboard and could even show video replays if there are televised matches there.

The sun sets and rises on an axis diagonal to the pitch from one end to the other, which is acceptable. The ideal is having the sun come up and down from side to side, and the worst situation is an east-west orientation where one team plays against the sun all the time.

The Alonte Sports Arena, a 6500-seat indoor hoops facility that has hosted PBA games in the past, is right beside the football stadium. In between the two stadia is a creek whose capacity has been increased ten times thanks to concrete embankments.

According to Vice Mayor Arman Dimaguila, Biñan is also planning to build an Olympic-sized swimming pool. The city, led by Mayor Marlyn Alonte-Naguiat, intends to host the Palarong Pambansa within the next few years.

As of the moment there is a two-lane road that leads to the city hall complex and the two sports facilities. But Dimaguila says the city government will purchase three hectares of adjacent land for parking and to make another access road leading out, to ease traffic during big sporting events.

“We envision the city to be a center of sports development,” says Dimaguila, who says this is the first artificial football field commissioned by a Philippine local government unit. It will be completely funded using government coffers and the entire shebang, field, track, lights, and grandstand, will likely cost P320 million.

Biñan's new football field will get its first taste of competition this month with the Philippine Football Federation's Women's Invitational Cup.

The tournament follows on the heels of the 9-a-side tournament the Federation held for the girls last year, which was won by FEU.

Ten teams will participate in a group stage followed by a playoff phase. The sides were drawn into two groups on Tuesday at the press conference in the PFF office. FEU will field two sides, one an all-student team and another a squad comprised of their top players and some alumni, including playing-coach Let Dimzon. Also entering two squads is UP, who will trot out two equal strength teams dubbed “UP x” and “UP y.”

DLSU, UST, and Ateneo will be the other UAAP teams involved, while Chelsea Soccer School, Sikat, and Green Archers United Globe round out the field.

The opening matches of the tournament that kicks off on August 9 will be held in Rizal Memorial, but it was revealed in the press con that subsequent games are planned for Biñan, Emperador, and FEU Diliman.

Gracing the press conference was senator Pia Cayetano, an avid supporter of women's sports and a confessed “soccer mom” herself. – Rappler.com