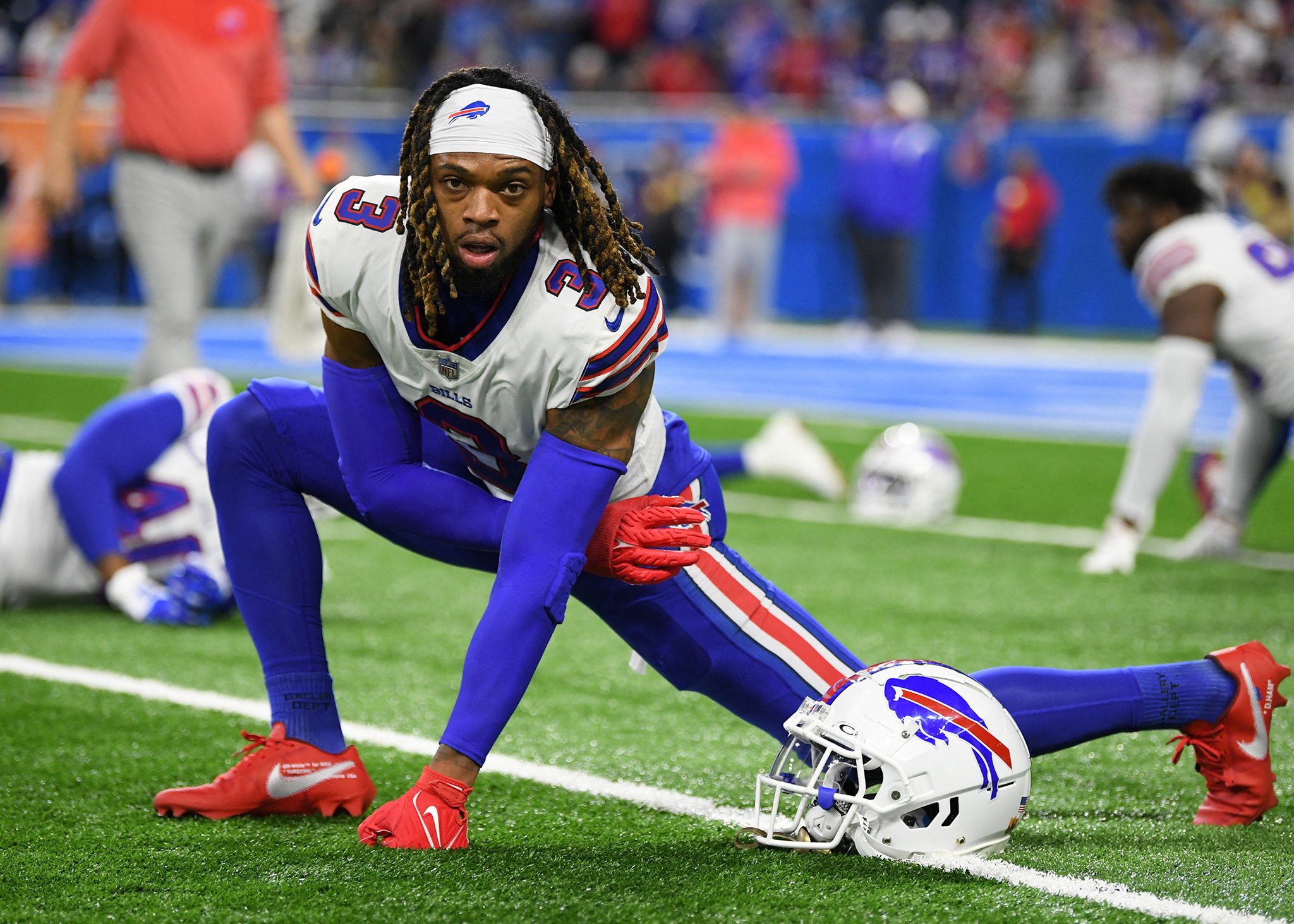 PRAYERS UP. Buffalo Bills safety Damar Hamlin warms up before a game.

The Buffalo Bills said safety Damar Hamlin remains in critical condition on Tuesday, January 3, after suffering a cardiac arrest during a Monday night NFL game, while the player’s family thanked supporters during this “challenging time.”

The Super Bowl-contending Bills said in a statement that Hamlin, 24, spent the night in the intensive care unit at the University of Cincinnati Medical Center, where he remains.

“We are grateful and thankful for the outpouring of support we have received so far,” the Bills said.

Athletes from the world of sports rallied to express support for Hamlin while all 32 National Football League teams changed their Twitter profile pictures to read “Pray for Damar” in white letters along with his jersey No. 3.

Members of Buffalo’s National Hockey League team, the Sabres, arrived for their game on Tuesday against the Washington Capitals swapping traditional shirt-and-tie game day attire for “Love For 3” t-shirts.

Famed Niagara Falls – both the American Falls and Canadian Horseshoe Falls – will be illuminated later on Tuesday as a show of support for Hamlin, the Bills and nearby city of Buffalo.

Hamlin’s family said they would provide updates on his condition when they become available.

“On behalf of our family, we want to express our sincere gratitude for the love and support shown to Damar during this challenging time,” Hamlin’s family wrote in a statement. “We are deeply moved by the prayers, kind words, and donations from fans around the country.”

During the first quarter of Monday’s game against the host Cincinnati Bengals, Hamlin got to his feet after making a tackle and then collapsed.

“In that moment you’re thinking, ‘What can I do? What can we do? And immediately it just breaks you down into prayer,” Hamlin’s teammate, offensive lineman Dion Dawkins, told CNN on Tuesday. “Damar is a fighter and he’s fighting and he’s going to keep fighting.

“We know our teammate – he is one of the strongest guys. He’s going to keep fighting, and he’s going to make it.”

The family also acknowledged the first responders and healthcare professionals at the hospital who aided Hamlin, as well as the Bengals and Bills organizations.

“Your generosity and compassion mean the world to us,” Hamlin’s family wrote. “Please keep Damar in your prayers. We will release updates as soon as we have them.”

Hamlin spent his rookie season limited to playing special teams roles but was thrust into Buffalo’s starting lineup last September after an injury to a teammate. His 91 tackles in 15 games this season are tied for second-most on the team.

No decision on game resumption

The game between the Bills and Bengals, which Cincinnati led 7-3 late in the first quarter before it was postponed, has significant playoff implications for both teams.

The NFL, whose regular season concludes on Sunday, said on Tuesday the game would not resume this week and that no decision regarding the possible resumption of the game has been made.

Initially the NFL was criticized for not moving faster to suspend the game, but Dawkins said he felt the league had demonstrated it cared about the players.

“We don’t control that, and we were able to take a step back and process everything that happened,” Dawkins said. “They did not force us to go back out there and play… it just shows there is care.”

NFL commissioner Roger Goodell in a memo on Tuesday sent to all 32 teams said mental health and support resources are available to players and staff and that additional on-site services can be made available.

Bengals owner Mike Brown said in a statement that his team sends thoughts and prayers to Hamlin and his family and asked that everyone support one another during “this unprecedented time.”

“Last night was supposed to be a great night for the NFL and a great showcase for our hometown. Instead, the human side of our sport became paramount… and in that moment, humanity and love rose to the forefront,” Brown said.

“As medical personnel undertook extraordinary measures, both teams demonstrated respect and compassion while fans in the stadium and people around the country bolstered the support for Damar and love for each other,” he said, adding, “Praying for Damar.”

In late 2020, Hamlin created the Chasing M’s Foundation and launched a fundraiser with a stated goal of $2,500 to buy toys for children ahead of that year’s holiday season.

The page, which has remained active, received nearly $3,000 during a two-year span through December 2022. Total donations have now skyrocketed to over $4.6 million as fans used it to show their support for Hamlin. – Rappler.com