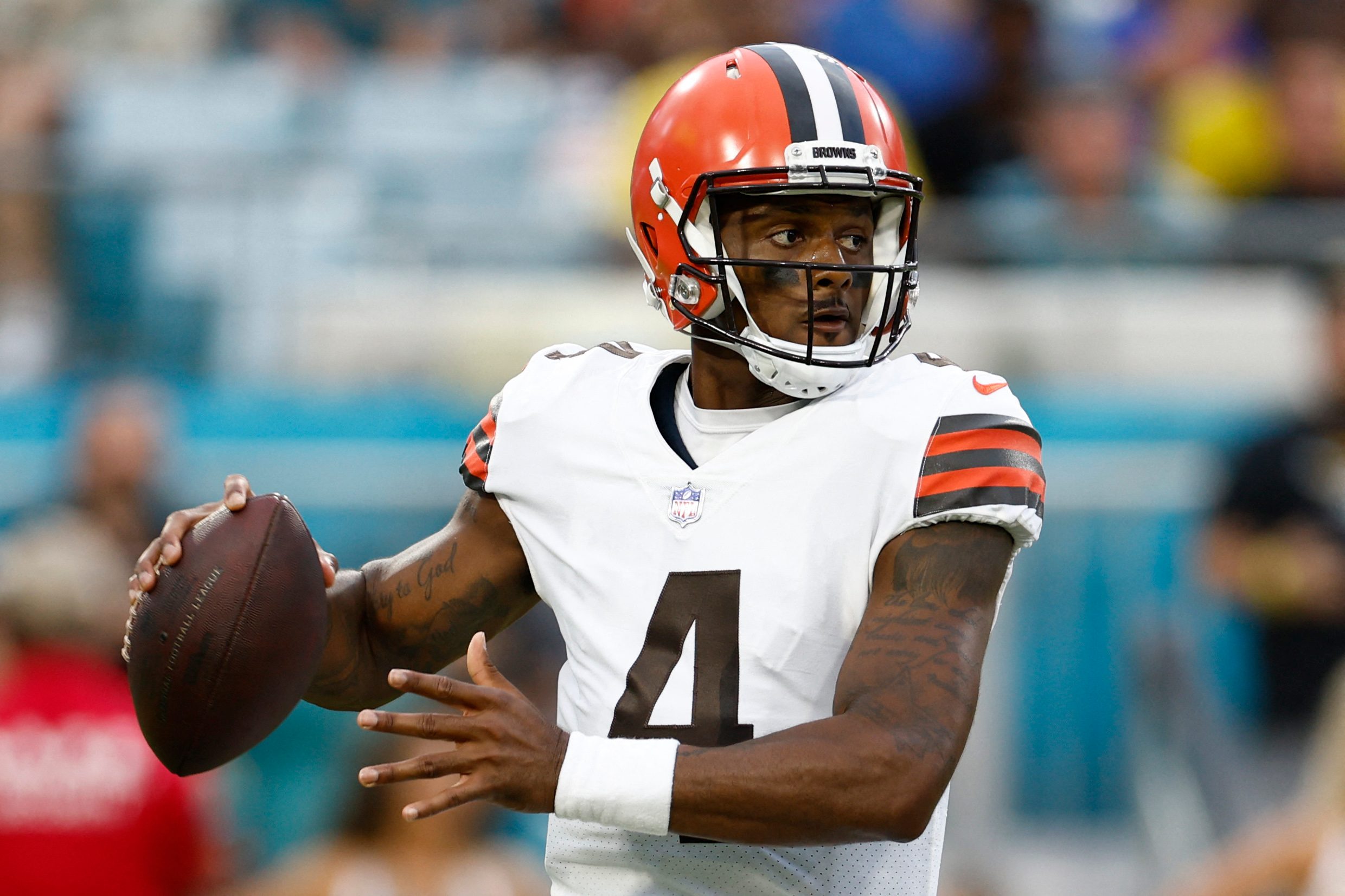 SUSPENDED. Cleveland Browns quarterback Deshaun Watson looks to throw the ball during a preseason game against the Jacksonville Jaguars.

Watson, represented by the NFLPA, and the NFL settled on the punishment after the league appealed an initial six-game suspension that was rendered from an investigation into the allegations.

The initial suspension was handed down by former US district Judge Sue L. Robinson, picked by the league and the NFLPA as an independent disciplinary officer.

The NFL will confirm compliance with the agreement.

Watson is first eligible for reinstatement on November 28.

“Deshaun has committed to doing the hard work on himself that is necessary for his return to the NFL,” commissioner Roger Goodell said Thursday. “This settlement requires compliance with a professional evaluation and treatment plan, a significant fine, and a more substantial suspension. We are grateful to Judge Robinson and Peter Harvey for their efforts in addressing these matters, which laid the foundation for reaching this conclusion.”

Goodell said the NFL and Browns will each donate $1 million to create a new fund “that will support the work of non-profit organizations across the country that educate young people on healthy relationships, promote education and prevention of sexual misconduct and assault, support survivors, and related causes.”

Watson, 26, said in a press conference following the NFL announcement on Thursday that he was ready to move forward with his career.

“I’ve always been able to stand on my innocence and always said I never assaulted or disrespected anyone,” Watson said. “But at the same point I have to continue to push forward with my life and career.”

Watson recently offered an apology “to all of the women that I have impacted in this situation” but previously had maintained that he had “no regrets” about his actions during massage sessions where the alleged wrongdoing took place.

“I’m grateful that the disciplinary process has ended and extremely appreciative of the tremendous support I have received throughout my short time with the Browns organization,” Watson said in a statement released Thursday by the Browns.

“I apologize once again for any pain this situation has caused. I take accountability for the decisions I made. My focus going forward is on working to become the best version of myself on and off the field and supporting my teammates however possible while I’m away from the team. I’m excited about what the future holds for me in Cleveland.”

“As we have previously conveyed, Deshaun and his representatives have abided by the NFL and NFLPA structure awaiting a final decision and we have respected the process,” the statement opened.

“Now that a decision on discipline has been reached, we understand this is a real opportunity to create meaningful change and we are committed to investing in programs in Northeast Ohio that will educate our youth regarding awareness, understanding, and most importantly, prevention of sexual misconduct and the many underlying causes of such behavior.”

The Browns acquired Watson via trade from the Houston Texans and signed him to a five-year, $230 million contract in the offseason. Watson reached financial settlements with 23 of the 24 women involved.

When the suspension ends, Watson would be eligible make his regular season debut with the Browns in Week 13 at Houston in December. The Browns have a bye in Week 9.

Until then, Jacoby Brissett is slated to start for the Browns. Coach Kevin Stefanski said Thursday that Watson will not play again in the preseason. He started last Friday’s game against the Jacksonville Jaguars.

Robinson handed down a six-game suspension earlier this month. The NFL appealed Robinson’s decision, wanting Watson to be suspended for a full season.

Harvey, a former New Jersey attorney general, was chosen by Goodell to hear the appeal. Goodell said the “evidence” called for more than a six-game ban.

Two women filed criminal complaints against the then-Texans quarterback, and 25 leveled lawsuits against him. Watson did not play in 2021 amid the scandal and his desire to be traded.

One woman dropped her lawsuit, and the quarterback has settled, or come to terms on settlements, with all but one of the others.

“By settling this matter the way he has, Roger Goodell has proven one of two things: either his recent rhetoric was utter baloney, or his bark is much worse than his bite,” plaintiffs’ attorney Tony Buzbee said in a statement, per Cleveland.com.

“My belief is that he is nothing more than a paper tiger. The message today to all victims is clear, if you believe you have been sexually assaulted by a powerful person, keep your mouth shut and go away.

“The NFL has certainly demonstrated that its ownership and the organization doesn’t care. To all sexual assault survivors, do not allow this recent ‘punishment’ to deter you. Keep speaking up and keep speaking out. Your voice matters. You are making a difference. We stand with you.”

In three postseason games, following the 2018 and 2019 seasons, he went 1-2 while completing 80 of 126 passes for 870 yards and four touchdowns with one interception.

In the Browns’ 24-13 victory over the Jaguars on Friday, Watson completed just one of his five pass attempts for 7 yards.

“Each and every snap, I want to make sure I cherish that because I’m not sure when the next time I’ll be able to get out there with those guys,” Watson said Friday after playing for the first time with the Browns against the Jaguars. – Rappler.com