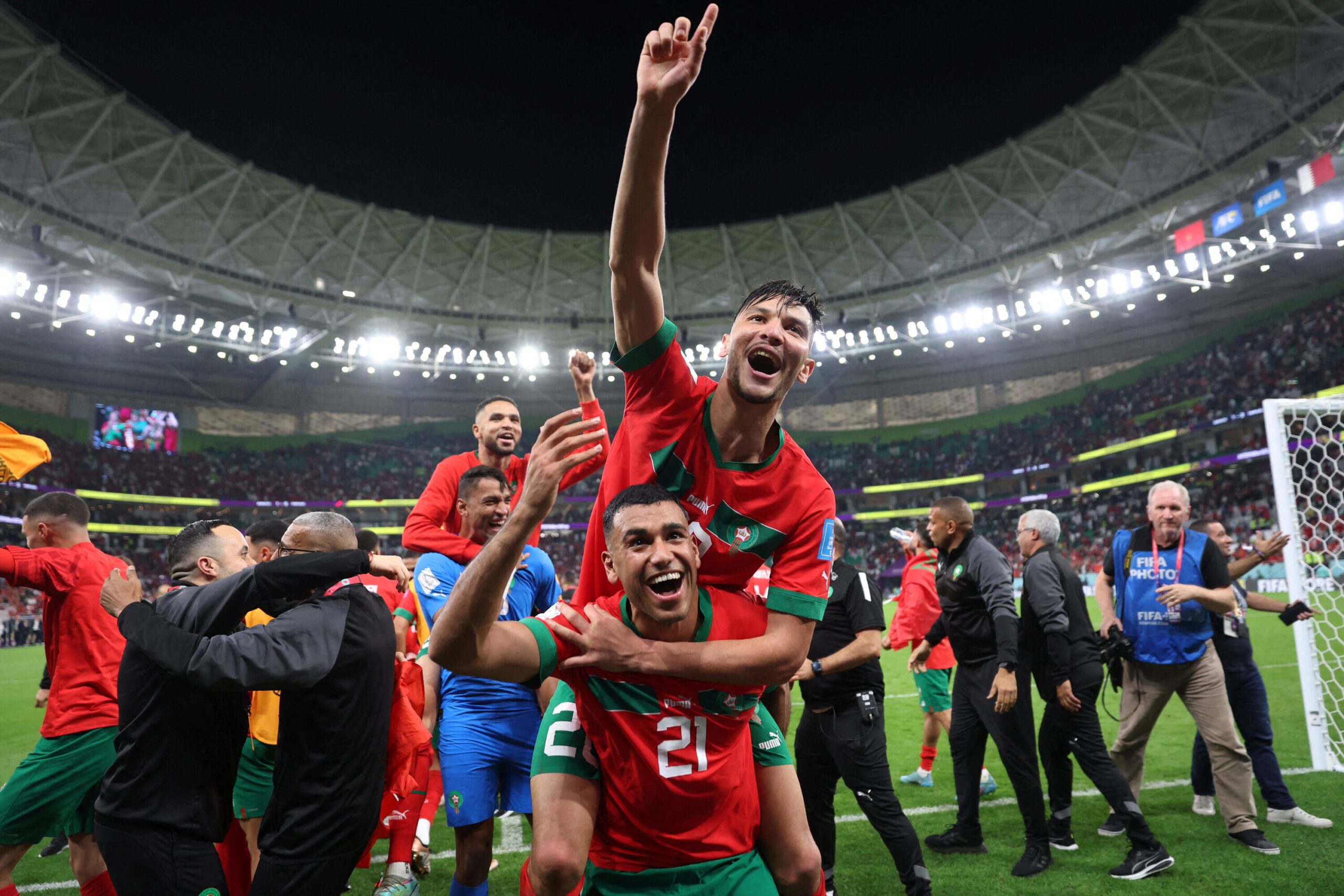 THRILLED. Morocco's Achraf Dari and Walid Cheddira celebrate after their upset of Portugal.

DOHA, Qatar – Morocco’s extraordinary run in Qatar continued on Saturday, December 10, as they claimed another massive scalp in beating Portuga,l 1-0, to become the first African and Arab country to reach the World Cup semifinals.

A hugely significant victory broke new ground for the game outside of Europe and South America, the dominant forces in the sport who have won all 21 previous editions of the World Cup.

The result could also go a long way towards vindicating the controversial decision to host the tournament in the Middle East.

Youssef En-Nesyri’s 42nd minute goal at the Al-Thumama Stadium means Morocco becomes only the third country outside of Europe and Latin America to reach the last four, after the US at the first World Cup in 1930 and South Korea, co-hosts when they got to the semis 20 years ago.

It is a result with major significance for the world game, providing proof that the gap between the top teams and the rest is closing and handing new hope to many countries who might have felt World Cup success was beyond them.

“I told my players before the match we had to write history for Africa,” said Morocco coach Walid Regragui, who only took charge of the team three months before the tournament.

Saturday’s victory for Morocco comes on top of their win over second-ranked Belgium in the group phase and penalty shootout success against Spain in the last 16.

But against Portugal, despite their pre-match protestations about fatigue, they were more ambitious. They looked for counter attack opportunities while soaking up the pressure with resolute defense.

Portugal had their chances but not enough to panic the Moroccan backline, who were without the injured Nayef Aguerd and lost skipper Romain Saiss to a thigh injury after halftime.

All the time Morocco waited to burst forward on the counter and left back Yahia Attiyat-Allah, starting his first game of the tournament, led the efforts with several surging runs down the flank.

He presumably did not want to cross with as much height as he did in the 42nd minute but En-Nesyri proved equal to the challenge with a towering header as he outjumped both goalkeeper Diogo Costa and defender Ruben Dias to hand Morocco the lead.

There were chances for a second as Jawad El Yamiq came close with a header from a setpiece after halftime and late substitute Zakaria Aboukhlal fluffed a chance when he was one-on-one with the goalkeeper at the end of the game.

“It’s really unbelievable, I’m so proud. It’s like a dream, unbelievable we’re in the semifinal,” said midfielder Sofyan Amrabat, one of the heroes of their unexpected run to the last four, where they will face France.

“We deserve this, 1000%. How we fight, how we play, with our heart for our country, for the people – it’s unbelievable. Our spirit, we have injuries, three defenders came in and how they defended, big respect.”

Morocco’s victory set off jubilant celebrations throughout the region and come as a boost to Qatar, whose choice as hosts was dogged by controversy but they can now wallow in the success of an Arab country.

Portugal had been runaway favorites on Saturday and will consider the defeat as a missed opportunity.

“It was a difficult game against a very aggressive team, very competitive as we had already seen throughout the tournament and against Spain,” said midfielder Bernardo Silva.

“Morocco has a lot of merit, Morocco eliminated Belgium, Spain and now Portugal, so it’s a selection with a lot of value and the names don’t matter.”

The match marked a possible end to Cristiano Ronaldo’s Portugal career, with the striker reduced to tears as he walked down the tunnel at the end of the game.

His 196th international appearance as a second-half substitute gave Portugal a temporary lift. But there would be no be no fairytale ending for the 37-year-old.

Ronaldo’s entry in the 51st minute was met with a loud chorus of jeers, but he did inject a new energy into the Portugal side for whom Goncalo Ramos, the hat-trick hero of their 6-1 win over Switzerland in the previous round, missed with a close-in header in the 58th minute.

But his side, to the delight of their raucous support, held out for a famous victory.

“It took us a long time to get into the game. The players wanted to, but they couldn’t,” said Portugal coach Fernando Santos.

“The players were very confident, they wanted it a lot, but the truth is that we weren’t able to show all of our game. We couldn’t make goalscoring chances. Leaving the World Cup always hurts.” – Rappler.com