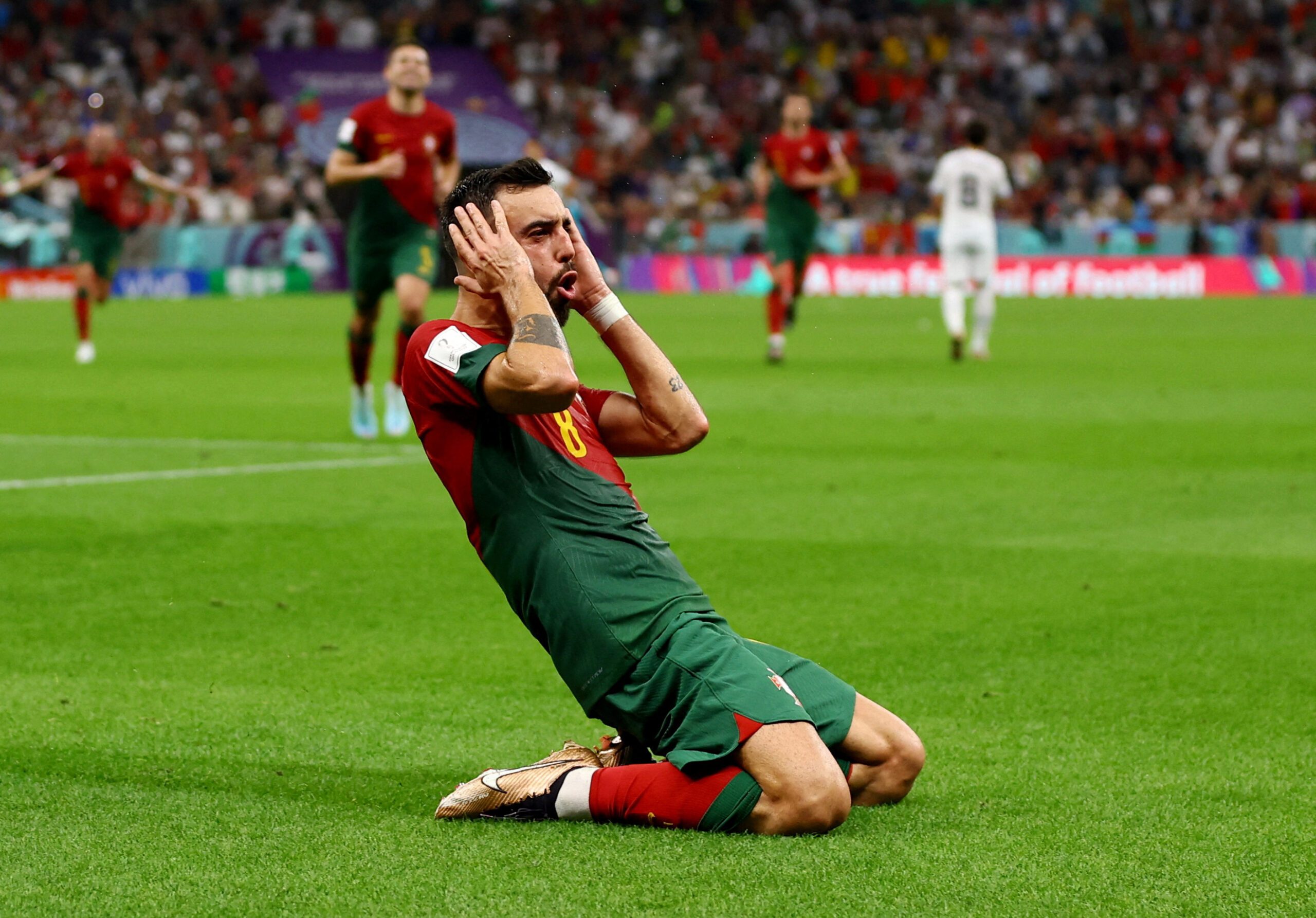 A second half brace from Bruno Fernandes sent Portugal through to the last 16 of the World Cup on Monday (Tuesday, November 29, Manila time), joining France and Brazil after a 2-0 win that outclassed an uninspiring Uruguay side that struggled to get into the match.

Fernandes scored first with a cross intended for Cristiano Ronaldo that sailed fortuitously into the net on 54 minutes and converted a spot kick in stoppage time to put his side into the knockout stages with a match remaining.

Ronaldo celebrated the first goal ecstatically as his own and smiled awkwardly when it was announced as belonging to Fernandes, who always looked threatening on the attack and twice came close to completing a hat-trick in the dying moments.

Portugal had the lion’s share of the possession and dominated for most of the Group H match in Lusail, but struggled to create chances until the second half in a game where Uruguay looked out of sorts and lacking initiative.

It was the third time at a World Cup that Portugal had won two successive group stage matches and the previous two times led to streaks into the semi-finals.

The result leaves Uruguay with a difficult final match against Ghana, who kept themselves in contention by beating South Korea 3-2 in the earlier Group H match.

Ronaldo set the tone with some showboating early on when he used a shoulder to redirect a long throw into the path of William Carvalho, whose powerful volley sailed over the bar.

Portugal looked threatening on the approach but struggled to create goalscoring chances, with Bernardo Silva, Fernandes and Joao Felix frustrated early on.

But it was Uruguay with the best chance of the half 32 minutes in when Rodrigo Bentancur ran half the length of the field, skipping around three defenders before firing off a low shot that was blocked by the advancing keeper Diogo Costa.

Bentancur came close again a few minutes later when his outstretched leg met a cross from the left from Mathias Olivera, trickling through to Darwin Nunez who failed to convert from close range.

Portugal battled hard for a goal and finally broke the deadlock nine minutes after the break when Fernandes’ cross floated past Uruguayan goalkeeper Sergio Rochet, who was rooted to his line as Ronaldo rose to head home ball but fell short.

Uruguay had a brief and desperate rally to try to get back into the match after a raft of attacking substitutions, with Facundo Pellistri making an instant impact, Luis Suarez coming close and Maxi Gomez blasting his shot into the post.

But the match belonged to Portugal and Fernandes, who coolly converted a penalty in stoppage time after a handball in the box that required a VAR review.

Hungry for more, Fernandes almost scored a third with his effort saved at the near post by Rochet and a strike in the last few moments that cannoned off the post.

“I’ve got to give the team credit. It was a brilliant thing. I wanted to keep the team solid. We clearly showed a very strong unit, both in the quality of the game and in the bond between them,” Portugal coach Fernando Santos said.

“That’s how positive things are achieved. We will always work like this.”

Asked about the confusion over who scored the first goal, Santos laughed and said: “It was a great match. Our team played very well and the rest does not matter.”

Giorgian de Arrascaeta, who among the substitutes brought on to try to give Uruguay a shot at an equaliser, said the team would need to go all out to qualify.

“We have one game left and we have to go for it,” de Arrascaeta said.

“Without doubt, we have to win come what may.” – Rappler.com