Azkals U23 miss out on Asian Cup berth after Singapore heartbreak 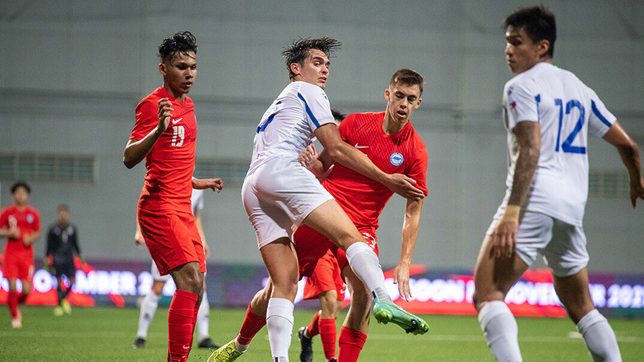 The Philippine Azkals absorbed their second consecutive defeat in the Asian Football Confederation (AFC) Under-23 Asian Cup 2022 qualifiers with a 1-0 loss to Singapore on Thursday, October 28, at the Jalan Besar Stadium in Singapore.

Glenn Kweh’s exquisite solo goal at the 51st minute lifted the Singaporeans to their first win of the qualifying tournament. The goalscorer dribbled past Yrick Gallantes, Miguel Mendoza, and Mark Winhoffer, then immediately fired a stunning left-footed shot before Justin Baas and Oskari Kekkonen could close him down.

His shot bounced once and hit the bottom left corner of the post before rolling inside the goal to leave Filipino goalkeeper Quincy Kammeraad without a clean sheet after two games.

Defending champion Korea Republic holds the top spot with 9 points and a +9 goal difference, while Timor Leste drops to third with 1 point and a -6 goal difference.

The 11 group winners of this qualifying round will be joined by the four best group runners-up in the main tournament to be held in Uzbekistan next June.

The home squad opened the match with three consecutive corner kicks after Glenn’s acrobatic shot off a Joel Chew free kick from the right wing was quickly denied by Kammeraad. Despite having numerous set-pieces inside the 4th and 7th minute, Singapore failed to convert these chances into a goal.

The Philippines had the golden opportunity to notch their first goal of the qualifying tournament at the 22nd minute after Jordan Emaviwe mistimed his kick and brought down Kieran Hayes inside the penalty box. Team captain Oliver Bias stepped in to take the penalty, but his powerful shot just rattled the bar to keep the match scoreless.

After conceding a goal in the 51st minute, the Azkals tried to change things up a bit as Paolo Perez, Ivan Ouano, and Mandy Ignacio were brought in from the bench for Jethro Borlongan, Winhoffer, and Mendoza respectively. Ouano almost had an instant impact but his effort at the 70th was off the mark.

A couple of substitutes from Singapore had three chances to finish off the match, but Farhan Zulkifli and Shah Shahiran were not able to extend their lead. Farhan saw his first effort blocked by a rushing Kammeraad, while his audacious effort at the 81st minute went a little bit wide. Shah’s free kick three minutes later produced a brilliant save from the Filipino keeper which led to a corner kick.

The Azkals will finish off their qualifying campaign against Timor Leste on Sunday, October 31, 5 pm, at the same venue. – Rappler.com