Why this Philippine SEA Games football team is special

MANILA, Philippines - How do you measure the heart of a football team? It's a question with many answers.

But last Monday night in Rizal Memorial, it wasn't the heart that needed measuring, but the Philippine U23 players' arms, shoulders and waistlines.

It was their last practice before jetting off for the South East Asian Games in Singapore, which, for the football team, starts on June 1. But instead of totally focusing on the football, the players, one-by-one, had to step away from the training pitch to have a tailor check their measurements for the barongs they will wear during the opening ceremonies.

A few feet away sat the coach, Marlon Maro, shaking his head and smiling. The Dumaguete native and former Navy man was experiencing yet another speed bump on his preparation for the tournament. He has had plenty.

The SEA Games is a 23-years-old and under competition. That means Azkals like Amani Aguinaldo, Daisuke Sato, OJ Porteria, Curt Dizon, Mark Hartmann, Manuel Ott, and Kenshiro Daniels would be qualified to suit up for this side.

But since the senior team has a World Cup qualifier against Bahrain on June 11, Azkals coach Thomas Dooley is starting a training camp on the day the Philippines opens its SEAG campaign on Monday, so most of those names will be with the senior side instead of in the Lion City.

Oddly enough, Porteria and Dizon didn't make Dooley's final roster for the Bahrain match, and are also not in the U23 team. Dizon was in the squad that played in the AFC U22 Olympic qualifying group two months ago but missed the Australia training camp. Porteria wasn't at either event but did slip on a training kit to practice with the team on Monday, perhaps as a show of solidarity with his mates.

Maro was also unable to bring into the squad several San Beda talents, like Matthew Asong, Ashley Jim Flores, and Raffy Cabug. Asong played in the AFC competition and did very well, while Flores, a winger from Laguna, shone in the Australia camp, scoring three times in five tuneup games.

(The Pinoys won three and lost two. On Monday the team drew Green Archers United Globe in a final tune up, 2-2.)

Green Archers striker Jhan Jhan Melliza is another casualty. He too was at training on Monday but apparently won't be going to Singapore.

Apparently, there is a long list of fifty players that was submitted to the POC months ago. I'm told there might have been a shorter list afterwards. Between those two lists, plus club release issues, changes in schedules, submission deadlines, classes, (many of the players are students,) and other assorted administrative gremlins, the aforementioned players were unable to be included in the final list of twenty that was released Monday. The coach says he hopes to make changes before Thursday's managers' meeting, but a PFF source says that late additions are unlikely.

And yet, Maro is a hopeful coach going into Monday's game, which will be the first of four group matches. Cambodia, Myanmar, and Indonesia are the other teams in the group.

“I am satisfied with the preparation,” he says. Previous to the camp in Australia and the AFC qualifying group in Thailand, the team also went to a camp in Japan a few months ago. 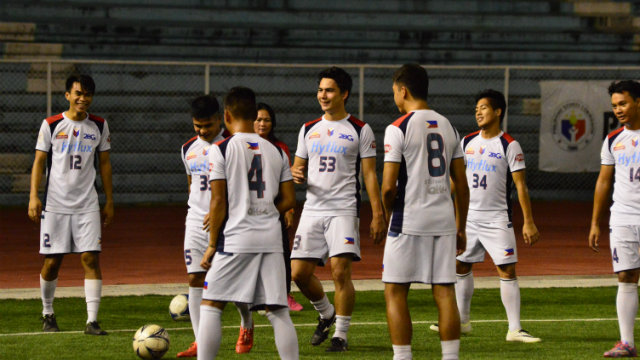 Maro is known to be an old-school coach, a strict disciplinarian who has coached Navy, Benilde in the NCAA, and has also been the Philippine women's national team coach. Everyone who knows him well in the football community respects his vast knowledge of the game. Maro, along with former Azkals chief Aris Caslib, is one of the first “A” license coaches in the Philippines.

“He is one of the elite AFC (Asian Football Confederation) instructors,” says his goalkeeper coach for this campaign, Noel Marcaida.

The players say they love their sensei's leadership and are learning plenty, which is always a good sign.

Maro admits his team will play counterattacking football, a common tactic for teams who are up against strong opposition. But there is hope that this team will do much more than just defend. The reason lies in the composition of the side. In some ways, this is a throwback Philippine team.

The remainder of the squad have all been born and raised in the Philippines. They all learned their football on the hardscrabble pitches of our archipelago. Thanks to the scheduling clash with the World Cup, it may be the last time that such a large collection of homegrown talents will ever represent the nation at so high a level in the current landscape of Philippine football.

“Iniisip ko din yan,” says midfielder Arnel Amita, when I ask him if he sees this SEA Games as a chance to prove the worth of the homegrown Filipino footballer.

The team's roots stretch from Maco, Compostella Valley, all the way to Tuguegarao, Cagayan. And many of them have terrific stories to tell.

The first-choice keeper will likely be Junjun Badelic from Manolo Fortich, Bukidnon. The Global netminder was recruited to play in the Emilio Aguinaldo College team, along with his brother Nixon, by then-coach Myk Agbayani. Global spotted him, and signed the talented youngster to back up Patrick Deyto.

But when Deyto hurt his leg, Badelic made his international debut against Pahang FA in the AFC Cup. In the hostile Darul Makmur stadium in Kuantan, Malaysia, Badelic starred, repulsing every attempt that went his way as Global picked up a crucial 0-0 draw away from home.

In the AFC U22 qualifiers Badelic was supposed to provide cover for Nick O'Donnell. But the Kaya stopper went down with a stomach ailment before the competition, which allowed Badelic to start against Thailand, a 4-1 loss, and versus Korea DPR, a 4-0 defeat. In spite of the lopsided scorelines, Badelic once again showed his mettle with a string of top-drawer saves.

Holding midfielder Daniel Gadia is yet another player to watch. Gadia learned the game as a boy in a futsal court in Dapitan street in Sampaloc. His coach then, Waldy Magtoto, said he was part of a crop of about eight very gifted youngsters, none of whom have achieved like Daniel.

Gadia played for San Beda's high school team before transferring to UP for college.

Two years ago his mother, who had suffered a stroke and was probably disoriented, vanished from their Parañaque neighborhood after taking a walk. She was discovered a few days later, dirty and disheveled but alive, in a Makati street by social workers. She was unable to speak and give her identity. Days later she was tearfully reunited with her family. Gadia says mom is on a tight leash these days.

Ian Clarino is another of the UP players on the squad. The centerback is part of a large family of footballers that includes kuya OJ, who played for the ill-fated Philippine SEA Games team in 2011, and younger brother Gino, now in UST.

Clarino arrives late to Monday practice, his shirt soaked with sweat. The lad has rushed to Rizal Memorial via public transport from UP Diliman, where he has taken several exams, including one for his tennis PE subject.

How much does playing for the country mean to Ian? Last year he missed the wedding of his own sister just to suit up for the Philippine team in Brunei at the Bolkiah Trophy, which is generally an under-21 team plus a few overage players. The team won their only match of the group, against Timor Leste, on his birthday.

Amita is the team's dribbling wizard. The FEU standout is a veteran of international play and was part of the Philippine team that won the Kanga Cup in Australia, a U19 tournament. He is a mischievous kid blessed with natural gifts honed by FEU coach Kim Chul-su.

Alongside Amita will be with another FEU standout from Compostela Valley, Paolo Bugas. The Global midfielder is no stranger to the Jalan Besar stadium, the venue for Monday's match against the hosts. He played there two years ago when he was still with Loyola, coming on as a late sub in a Singapore Cup clash. He did so well that the expatriate Pinoy crowd chanted his name.

Ronnie Aguisanda is also familiar with Singapore. He's the kid from Tuguegarao. (What? They have football in Tuguegarao?)

Aguisanda played in FEU too, as a goalie, but now he is in the back four for Green Archers United Globe.

Two years ago the Philippines U23 team played a friendly against Singapore's U23 team in Singapore. Nine homegrown players started and the hosts only won 1-0. I asked the keeper that day, Deyto, how they achieved such a decent result.

“Ronnie Aguisanda was in Beast Mode,” he replied.

The team's likely starter at left back is the epitome of grit and perseverance. Shirmar “Nonoy” Felongco is from Calinog, Iloilo, and he finished up his collegiate career with UST in 2014.

Somewhere along the way, someone misspelled his first name as “Shinmar,” and unfortunately, it stuck. He has trophies that say “Shinmar Felongco.” But what's a kid from Calinog to do?

Last year Felongco was one of the last cuts in the Bolkiah team. I still remember him in the final training before the side went to Brunei, watching forlornly from the grandstand while the others battled on the pitch in Rizal Memorial. Since then he has proved himself in the UFL and became a starter in the U22 competition in Thailand. His speed, power, and physicality will be assets.

Arboleda is from the underrated football powerhouse of Romblon, the island that produced Alvin “Power” Valeroso, who scored twice for the Azkals at senior level in the aughts.

Arboleda knows where the back of the net is. At a U19 game in 2011, the former UE Red Warrior scored a hat trick against Cambodia, although the Philippines lost 5-3. In the U22 AFC qualifiers he scored against Cambodia again in a 3-1 loss.

Salenga is another scoring threat. The Kapampangan from Floridablanca, (What? They have football in Floridablanca, Pampanga?) scored one of the Pinoy goals of the year in the U22 qualifiers in Thailand, a late consolation against the hosts, with a Robin Van Persie-esque flying header off an Uzoka cross.

So this team is missing big names but will play with something to prove. The boys seem eager to show that the Philippine footballing machine can produce a good team. This is, after all, a game where eleven men can gel into a sum greater than its parts. They need to finish second in a tough group to reach the medal round. It's a tough ask, but spirits are high.

It's also the first, and probably last time, when Valmayor, Arboleda, Amita, and Bugas, part of a semi-Golden Generation of UAAP stars, will all play together in a real competition with PFF crests on their shirts.

On June 5 the boys will walk out onto the track of Singapore's National Stadium as part of the opening ceremonies. By then they will have had played twice. No matter what those first pair of games bring, once thing is certain: they will don their crisp new barongs with pride.

Philippine U23 Mens Football Team Schedule at the 2015 SEA Games