POSITIVE. The Philippine women's football team is hoping to become strongest delegation in the Asian Cup.

The Philippine women’s football team is not bothered by the tough competition in the 2022 Women’s Asian Cup in India as it firmly believed it has a chance of qualifying for the FIFA Women’s World Cup.

Thanks to the guidance and influence of former Matildas coach Alen Stajcic, the Filipinas are entering the tournament with a positive mindset of bearing a great chance in their 10th appearance in the continental tournament.

“I think positively we just have to go in knowing that we can do well, and we know that if we do those things [the coaching staff tells us to do], we will have a stand a good chance against them,” said striker Chandler McDaniel.

“So I think that we just have to rely on each other and what the coaches have told us from the previous camps and leading up to this and know that we can go in and we can win.”

The national team trained in Irvine, California for two months under the mentorship of Stajcic, who led Australia to qualify for two editions of the World Cup.

The Philippine women’s football team is looking to be primed as the strongest contingent sent to the Asian Cup thanks to the guidance of Stajcic and his coaching staff, and the team’s efforts to learn.

“I think that the coaching staff came in and did a very good job at explaining what they want from us and the goal because we did have such a limited time because unlike other teams,” said Anicka Castañeda. 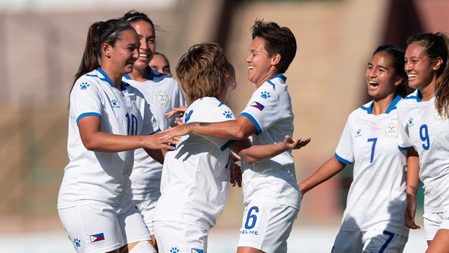 The Philippines will kick off its campaign against Thailand on Friday, January 21, 8 pm (Philippine time) at the D.Y. Patil Stadium in Navi Mumbai, followed by Australia on Monday, January 24, 6 pm at the Mumbai Football Arena, and will cap off the group stage against Indonesia on Thursday, January 27 at the Shri Shiv Chhatrapati Sports Complex.

Only the top five teams will advance to the 2023 FIFA Women’s World Cup that will jointly be hosted by Australia and New Zealand. The quadrennial football tournament expanded its qualifying quota from 24 to 32 squads from six confederations. – Rappler.com