Azkals in good spirits ahead of delayed Suzuki Cup 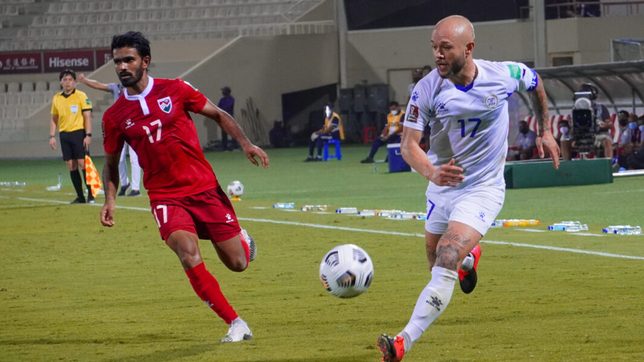 LEADER. Stephan Schrock (right) and the Azkals aim for at least a semifinal finish in the Suzuki Cup.

MANILA, Philippines – The Philippine Azkals look all set as a good mix of young and veteran players banner the national football team’s campaign in the AFF Suzuki Cup in Singapore this December.

Team captain Stephan Schrock leads the charge along with naturalized forward Bienvenido Marañon, who hopes to make an immediate impact in his first ever call-up for the Philippine squad.

The Philippines, aiming for its first ever Suzuki Cup title after 12 appearances, kicks off its bid against host team and four-time winner Singapore on Wednesday, December 8 at 8:30 pm.

“I’ve been very very pleased with the attitude of the players so far,” said Azkals assistant coach Stewart Hall. “Everybody is training with a smile on their face, I think the intensity in training has been very good. They’ve accepted the things I’ve thrown at them.”

Schrock, who just met up with the team recently, is one of the older players the Azkals look to lean on both on and off the pitch. Helping him guide the younger players are Azkals veterans Amani Aguinaldo, Daisuke Sato, Martin Steuble, Kevin Ingrreso, Mike Ott, Iain Ramsey, Angel Guirado, and Patrick Reichelt.

The 35-year-old Marañon, meanwhile, seems to be getting along with the other players as well since some speak Spanish, his native language.

“His finishing was excellent. That’s why he’s in the squad – his goals record,” said Hall of Marañon, the all-time leading goalscorer with 35 goals in the Asian Football Confederation (AFC) Cup. “I think he’s a good addition and very, very easy to work with.”

After their first match against Singapore, the Azkals play Timor Leste, five-time champion Thailand, and Myanmar in a span of eight days.

“Pressure is not an emotion. It’s something that’s created within yourself so I’m not a great believer in pressure one way or another. It’s how you handle things.”