Facebook Twitter Copy URL
Copied
In a lengthy social media post, not one time did Tom Brady mention the Patriots, where he won six of his seven Super Bowl titles and spent the first 20 years of his NFL career

Tom Brady has covered a lot of ground throughout his legendary career, from winning seven Super Bowl titles to routinely writing his name throughout the NFL record book.

A thorough competitor on the field, Brady had one omission during his lengthy social media post that announced his retirement from the NFL on Tuesday, February 1 (Wednesday, February 2, Manila time).

Brady did not acknowledge the New England Patriots in his statement. Yep, not one time did the 44-year-old mention the team with which he won six of those Super Bowl titles and spent the first 20 years of his NFL career.

Brady’s initial statement lived on social media for approximately three hours before he returned to address the Patriots. After all, Brady and Bill Belichick own the record for Super Bowl appearances (nine) as a player and coach combination.

“Thank You Patriots Nation (heart emoji) I’m beyond grateful. Love you all,” he wrote on Twitter. 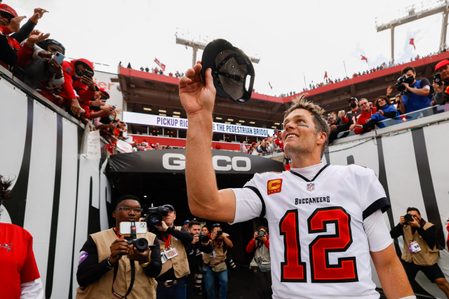 Brady initially did not mention the Patriots, however that didn’t stop the club from showing its respect for its longtime quarterback.

The Patriots posted an illustration of Brady riding a duck boat off into the sunset with the caption: “It was quite the ride. Thank you and congratulations.”

“Words cannot describe the feelings I have for Tom Brady, nor adequately express the gratitude my family, the New England Patriots and our fans have for Tom for all he did during his career. A generation of football fans have grown up knowing only an NFL in which Tom Brady dominated,” Kraft said.

“… You didn’t have to be a Patriots fan to respect and appreciate his competitiveness, determination and will to win that fueled his success. As a fan of football, it was a privilege to watch. As a Patriots fan, it was a dream come true.”

The Patriots drafted Brady with the 199th pick in the 2000 NFL Draft out of Michigan. He won three Most Valuable Player awards and earned 14 of his record 15 Pro Bowl selections with New England. – Rappler.com