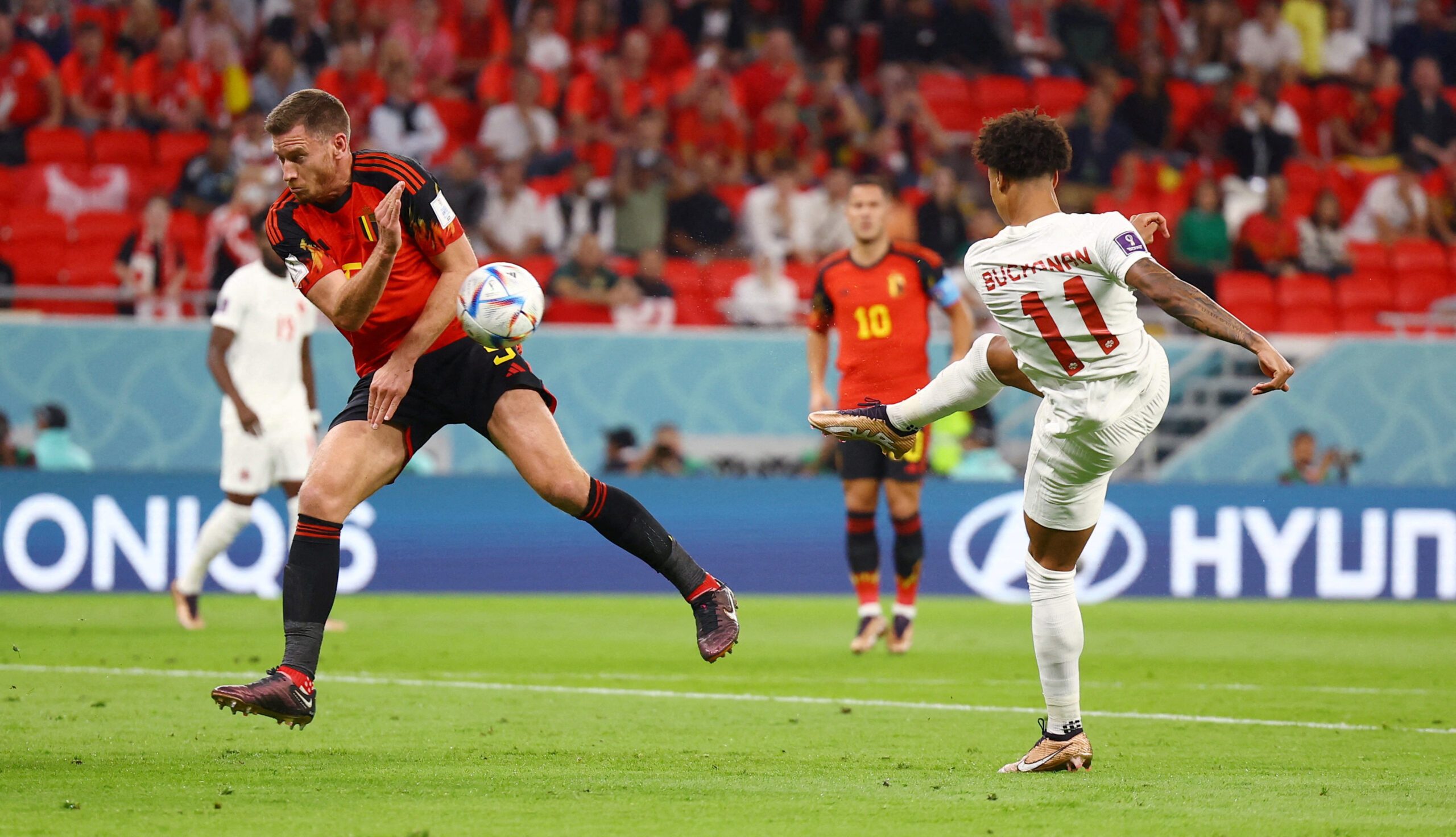 ROUGH. Canada's Tajon Buchanan kicks the ball as Belgium's Jan Vertonghen attempts to block before a penalty is awarded to Canada.

AL RAYYAN, Qatar – Belgium coach Roberto Martinez was happy with what he called a deserved 1-0 win over Canada in World Cup Group F on Wednesday, November 23, despite the “worst technical performance” of his six-year tenure.

After Argentina and Germany lost their opening games, Belgium came close to suffering another major upset but the team who finished third at the 2018 World Cup top the group by two points from Croatia and Morocco.

“Was it technically the worst performance? Yes. The worst game? No, because it’s a win at the World Cup. We had to show a different side of our game and had to defend really well,” Martinez told a news conference.

There is obviously massive room for improvement for Belgium, who were pale shadows of the brilliant side who reached the last four in Russia four years ago.

“We have to be self-critical and improve. But it’s better to do it when you have three points, especially after seeing what happened (to Argentina and Germany),” Martinez said.

Midfielder Kevin De Bruyne, however, was plainly dissatisfied and the Man of the Match award he received did little to console him.

“I don’t think I played a great game. I don’t know why I got the trophy. Maybe because of my name,” he said.

“We started bad, and the momentum was with Canada, we didn’t find a way to go through that press. We didn’t build up well while there was a lot of space. It wasn’t good enough.

“But we know what to change. The precision was lacking, also with me. There was fighting spirit, that is a minimum requirement. A match like this is a major tournament is always special. We made it difficult for ourselves and that caused stressed in the team.”

That stress was particularly evident in the first half when Belgium goalkeeper Thibaut Courtois stopped a penalty from Alphonso Davies among a series of good saves.

Belgium will play Morocco next on Sunday.

And the Moroccans can’t be taken likely either as they held Croatia – the 2018 runner-up who lacked the punch and guile of the side that went so close in Russia – to a scoreless draw.

Chances were at a premium at Al Bayt Stadium as an even Group F contest produced little goalmouth action and ended in the third goalless draw in nine games at the World Cup so far.

There were glimpses for both sides, with Nikola Vlasic going close for Croatia at the end of the first half while Noussair Mazraoui had a header saved for Morocco, but nobody could find the breakthrough as the mercury soared on an energy-sapping afternoon.

The Croatians, who were beaten 4-2 by France in the last World Cup final, will now turn their attentions to their game against Canada on Sunday. Canada and Belgium face off later on Wednesday.

Croatia coach Zlatko Dalic was far from downcast with how his side had performed, with his only criticism that they lacked bravery to take more of the fight to their opponents.

“We were very cautious not to make a mistake and were a bit indecisive,” he said. “I might say a bit of courage was missing on our side… but today Croatia had control and possession but not enough opportunities.”

Croatia’s best moments predictably hinged on Luka Modric, who was given the freedom of the park, floating effortlessly from back to front, with football’s traditional midfield roles seeming not to apply to Croatia’s captain.

One minute he was patrolling in front of his back four, the next hanging off the shoulder of Andrej Kramaric up front, but always looking to open up the North Africans, whether he was hovering at right back or hunting further forward.

Morocco coach Walid Regragui was over the moon that his side had prevented the Croatian schemer from wreaking too much havoc.

“Modric was unbelievable, what a player,” he said before declaring his satisfaction with a draw against Croatia, who he described as “one of the best teams in the competition.” – Rappler.com