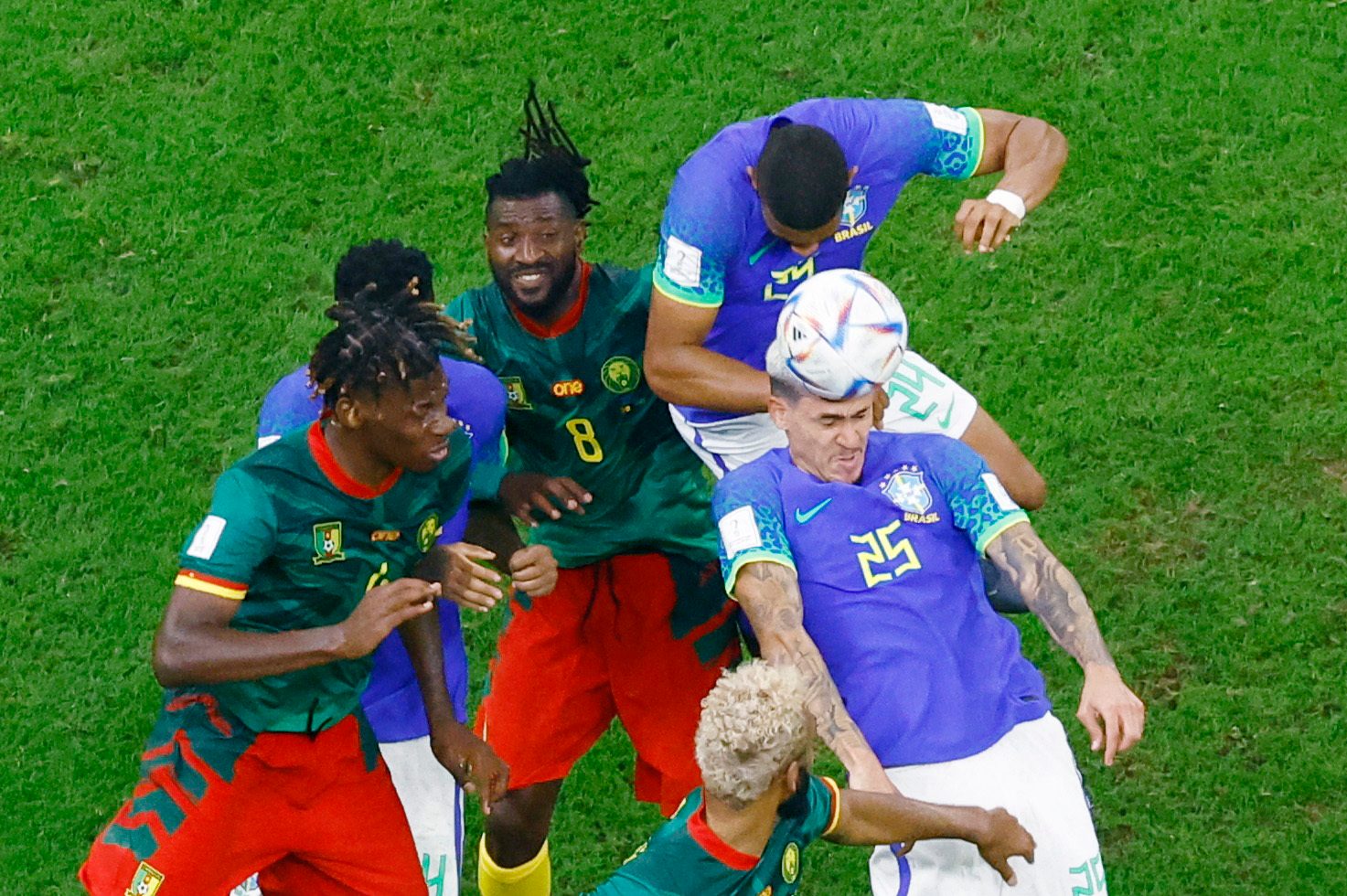 Facebook Twitter Copy URL
Copied
Neymar races against time to be fit for Brazil’s last 16 clash against dangerous South Korea as the world No. 1 team’s second stringers absorb a stunning loss to Cameroon

LUSAIL, Qatar – Brazil defender Danilo has shown positive signs in his recovery from an ankle injury while Neymar is racing against time to be fit for their last 16 clash against South Korea, team doctor Rodrigo Lasmar said after Friday’s 1-0 defeat by Cameroon.

Both Danilo and Neymar suffered ankle injuries in Brazil’s opening 2-0 win over Serbia, which ruled them out of their 1-0 win over Switzerland and the shock loss to Cameroon.

Alex Sandro suffered a hip injury in the game against the Swiss, while Alex Telles and Gabriel Jesus could also join the injury list after complaining of pain after Friday’s game, where Tite fielded a second-string Brazil side.

“Regarding Neymar and Alex Sandro, we think we have time on our hands and there is a possibility,” Lasmar told reporters when asked about their availability for Monday’s last 16 game.

“Let’s wait what their transition will be – they have still not started to practice with the ball and it’s something they will do tomorrow. It will be important to see how they respond to this new style, so depending on that, we will make a call.

“Danilo has been evolving very positively and today he did intense work with the ball and has adapted functionally very positively. The expectation is tomorrow he will be able to train normally with all players.

“Let’s observe what happens and if everything is OK, we have very high expectations that he will be available for the next match.”

The team doctor added that Telles and Gabriel will undergo tests on Saturday.

“Alex Telles came off complaining of pain in his right knee after trauma. He has been assessed in the changing room and tomorrow will do a magnetic resonance image to be able to assess his condition,” he said.

“Gabriel Jesus after the game complained of pain in his right knee and after clinical assessment, we have asked for an imaging exam tomorrow.”

Despite losing to Cameroon, the first African team to beat Brazil at the World Cup, Tite’s side finished top of Group G on goal difference on six points, ahead of Switzerland who went through after beating Serbia 3-2.

Brazil is bidding for their sixth World Cup in Qatar.

A late goal by skipper Vincent Aboubakar ended Cameroon’s 20-year wait for a win at the World Cup as the Indomitable Lions bowed out in style by beating a much-changed Brazil, 1-0, at the Lusail Stadium on Friday.

Cameroon, whose last win at the World Cup was in 2002 against Saudi Arabia, were on the back foot for most of the match but sprung to life at the death. Aboubakar powered a header past Ederson then was sent off for collecting a second yellow for taking off his jersey in celebration.

The win was Cameroon’s first against Brazil at the World Cup and the South American giants’ first defeat by African opposition at the finals.

Brazil had by far the larger share of possession and carved out many more chances than their opponents, but in the end it was Cameroon who got the only statistic that actually counts.

“We dominated the match and had several chances, the only thing missing was a goal,” Brazil’s Eder Militao said.

“We should have scored but a lack of attention in one play allowed them to score. It’s frustrating considering the way we played.”

The match played out in a relatively subdued atmosphere in the cavernous Lusail Stadium, the tournament’s biggest venue, with Brazil’s reserves eager to impress but Tite’s side unable to assert their usual flair.

Gabriel Martinelli was Brazil’s liveliest player and nearly put the five-time champions ahead in the 14th minute when he was picked out by Fred’s ball over the top, but the Arsenal forward’s header drew a fine reaction save from Devis Epassy.

Cameroon offered nearly no attacking threat until the first half injury time, when Nicolas Moumi Ngamaleu’s cross was met with a powerful downward header by Bryan Mbeumo that Ederson clawed away one-handed at full stretch.

Tite had seen enough and made a triple change soon after the interval, bringing on Marquinho for the injured Alex Telles, and replacing Rodrygo and Fred with Everton Ribeiro and Bruno Guimaraes.

The substitutes stirred Brazil into a sudden flurry of chances with Epassy forced into action three times in as many minutes.

First, Martinelli stung the Cameroon keeper’s palms with a snap shot in the 56th minute.

Next, Militao tried his luck from the ensuing corner coaxing a fumble out of the Cameroon keeper, who recovered to scramble the ball out to safety, before the lively Antony got in on the act, forced Epassy into a diving save to keep out his curling effort.

Tite sent on Pedro in the 64th minute and Raphinha in the 79th as Brazil sought to save their perfect record in the group, but Cameroon clung on until Aboubakar arrived in the right place at the right time to seize his moment. – Rappler.com