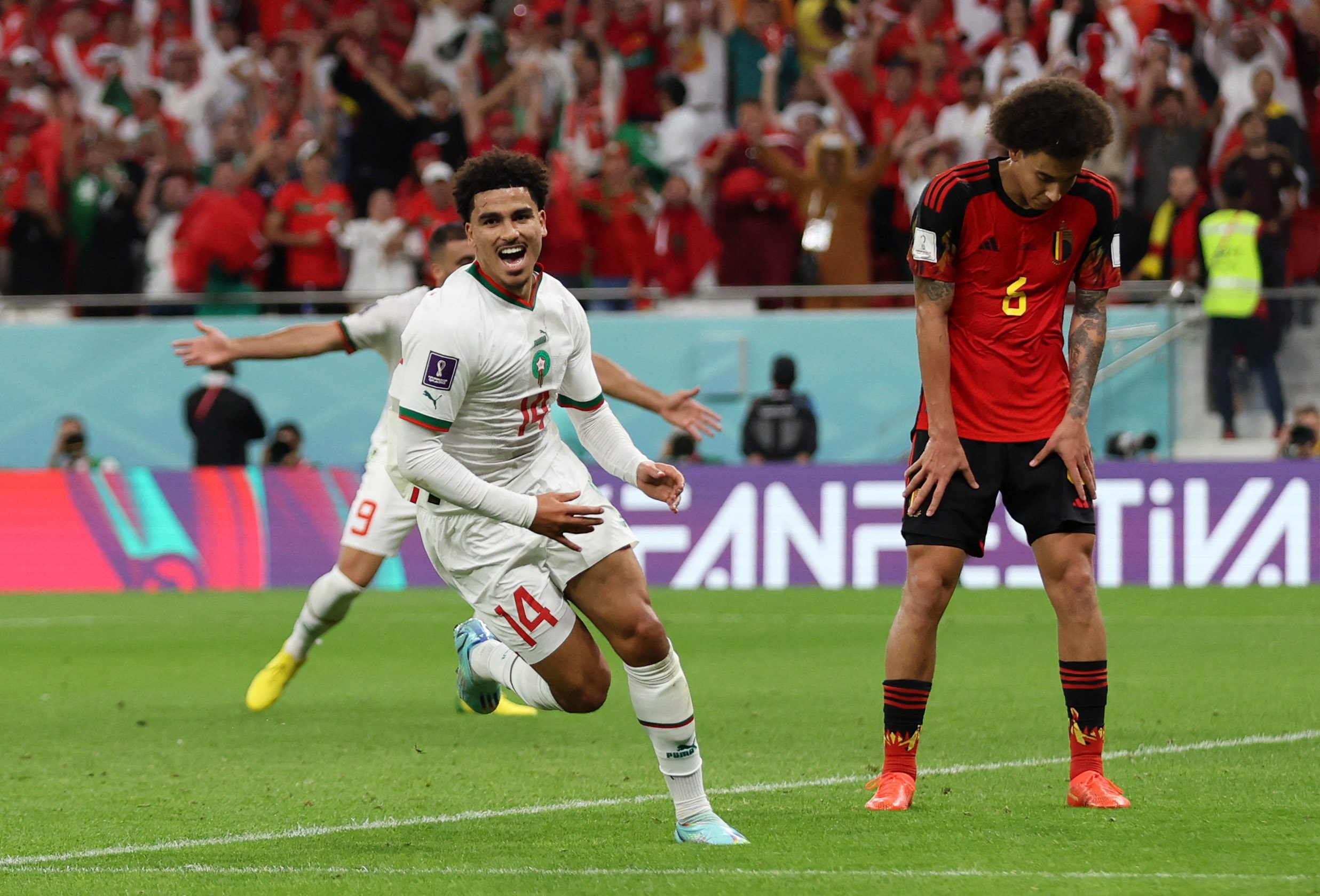 Facebook Twitter Copy URL
Copied
Morocco subs strike late to earn their first World Cup victory in 24 years off an upset of Belgium, whose side looked a pale shadow of the team that finished third in 2018

The Morocco fans gave the match a vintage World Cup feel in a boiling atmosphere at the Al Thumama Stadium and Sabiri curled a wide free kick past Thibaut Courtois before Aboukhlal netted in stoppage time to put Morocco top of Group F with four points, one ahead of Belgium.

It was Morocco’s first win at a World Cup since they beat Scotland in 1998. They left the 2018 tournament with a single point.

“We scored at the right moment. We deserved to win. After 70 minutes some of our players were tired, but the way the crowd got behind us, they really helped us. They gave us a big boost,” said Man of the Match Hakim Ziyech.

Belgium, who had scraped a 1-0 win over Canada in their opening game, again looked a pale shadow of the team who finished third in 2018 and climbed to second in the world rankings. They must now battle for a last 16 spot against Croatia.

“It’s a difficult result. We couldn’t get our game going. It’s a game we need to understand; we need to be together and react. That’s what happens at the World Cup,” said Belgium coach Roberto Martinez.

The Red Devils’ poor display even forced Martinez to send Romelu Lukaku on for the last 10 minutes in a desperate attempt to salvage a point, even though the burly striker had been struggling with a hamstring problem.

Croatia, who have a point from their draw with Morocco, play Canada in the other Group F game later on Sunday.

In a lively start, Morocco looked happy to sit and wait amid the deafening whistles of their fans, although bouts of intense pressing led to a couple of dangerous counter-attacks with Ziyech the main threat.

Courtois was beaten for the first time in the tournament when Ziyech fired a free kick into the pack and it bounced past the keeper at the near post on the stroke of halftime.

Romain Saiss, however, was marginally offside and referee Carlos Ramos ruled the goal out after a VAR review as the Besiktas defender was obstructing Courtois’ view.

Morocco started to fancy their chances and were more on the attack with Sofiane Boufal’s shot from just inside the box going just wide after the break.

Belgium were out of sorts and Martinez sent Youri Tielemans and Dries Mertens on to replace Amadou Onana and Eden Hazard.

Mertens had an immediate impact, forcing El Kajoui, who stood in minutes before kickoff for Yassine Bounou, into a superb save with a fierce shot.

Morocco substitute Sabiri broke the deadlock in the 73rd with an angled free kick similar to the one that led to the ruled-out goal in the first half, as Courtois could only fumble the ball into the net.

Saiss was also in the way, but onside this time, and Morocco defended tooth and nail until they found another opening, with Aboukhlal clipping Ziyech’s cross into the roof of the net as the stadium boiled over. – Rappler.com